We support projects to restore historical and artistic heritage

Iberdrola, through its foundation in Spain, provides constant support for projects to recover and conserve our historical and artistic heritage, in collaboration with renowned organisations and institutions. Prominent among the projects undertaken is the Atlantic Romanesque Restoration Plan, the scope of which goes beyond mere artistic restoration, making it a driver of social revitalisation. We also collaborate with prestigious restoration workshops at leading museums such as the Prado and Bilbao Fine Arts museums to restore famous masterpieces. 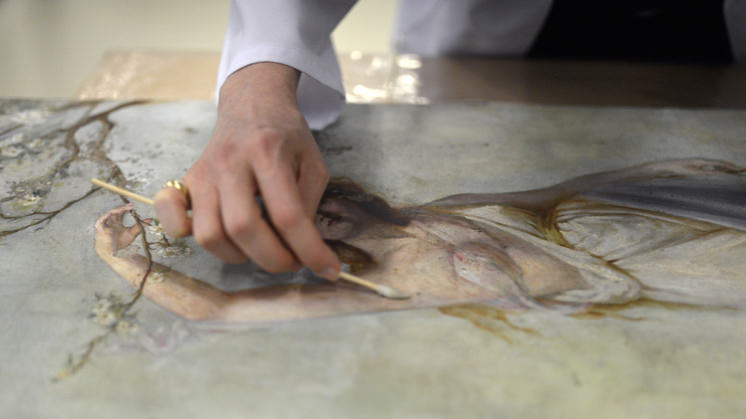 At Iberdrola we support projects to restoration of art works and historic buildings.

In February 2020, Iberdrola — through its foundation in Spain — extended the Atlantic Romanesque Plan

External link, opens in new window. to the next four years (2020-2023). It is a cross-border cooperation project to preserve cultural heritage sponsored by the Government of Castilla y León and Fundación Iberdrola. Since its inauguration in 2010, the Plan has been involved in work on some twenty Romanesque churches in the provinces of Zamora and Salamanca in Spain and the regions of Porto, Vila-Real and Bragança in Portugal.

Its activities include the work being carried out on the church of San Martín de Tours in Salamanca to alleviate the structural problems it suffers from its origin and which are worsening over time. This church, which was built in the 12th century on the site of an earlier building, has been declared a Historical-Artistic Monument and together with the Catedral Vieja (Old Cathedral) it is the city's most significant Romanesque building. As part of the project, that entailed an investment of 356,000 euros, it was decided to monitor the space to gather real data on its condition. The first sensors were installed in 2015 and the building has been under constant observation ever since. With the extension of the Atlantic Romanesque Plan

External link, opens in new window. it is decided to continue with the improvement works of the building six more months.

Conservation and restoration of the cultural heritage of northern Portugal

Among the actions included in the Atlantic Romanesque Plan are the exterior restoration works to the Portuguese Sanctuary of Our Lady of the Oak, in the municipality of Chaves, which has been declared an Asset of Public Interest. The project has included the complete replacement of the roof, gables and gutters; cleaning and treatment of the exterior masonry and decorative elements; the restoration of doors, stained glass windows and protective railings; and works on the peripheral drainage around the church.

Our Lady of the Oak Church (Chaves, Portugal). 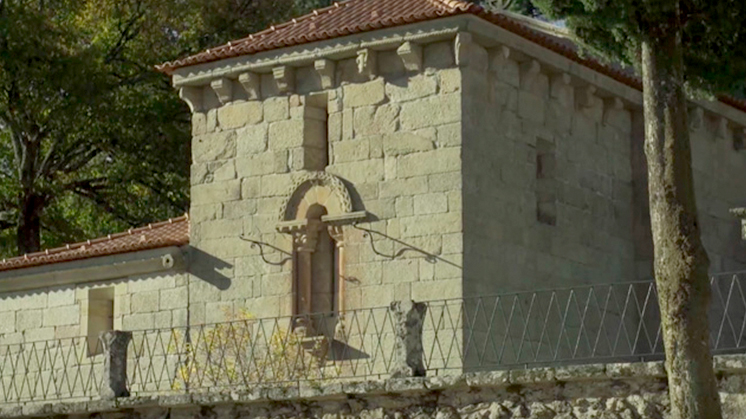 Also in Portugal, coinciding with the start of the second phase of the plan, Iberdrola carried out restoration work on the Romanesque churches in Covas del Barroso and Serzedelo in 2017.

Recovery and enhancement of heritage sites in Zamora and Salamanca

On the other side of the border, Iberdrola is working to enhance and recover the chapel of Our Lady of Fernandiel

External link, opens in new window. in the Zamora town of Muga de Sayago. The intervention is focusing on the restoration of a set of 16th-century mural paintings, as well as the installation of a new electricity supply based on solar panels and new ornamental lighting with the latest LED technology to guarantee the buildings conservation and enhancement. 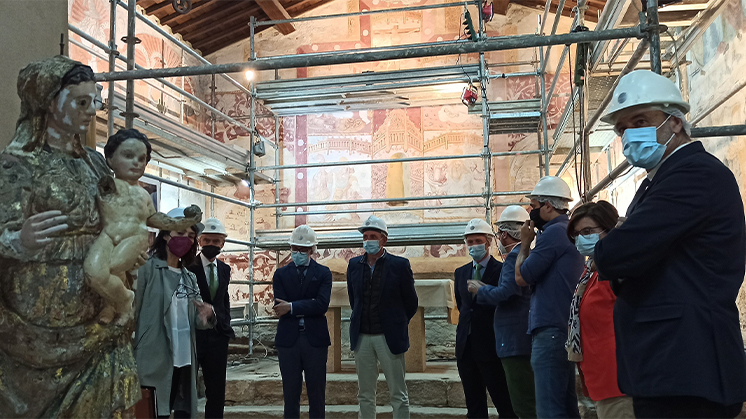 The Minister of Culture and Tourism of the Castile and Leon Government, Javier Ortega, and the President of the Fundación Iberdrola España, Fernando García, during their visit to the Our Lady of Fernandiel chapel (Muga de Sayago, Zamora).

This is taking place at the same time as the work in Muga de Sayago, in the province of Salamanca, to renovate and conceal the lighting in the church in Carrascal de Velámbelez and to finish the interior of Saint Martin of Tours church, with the aim of halting the structural problems that have existed since its origin and which have worsened with the passage of time.

Saint Martin of Tours church, which was built in the 12th century on top of an earlier construction, has been declared a Historic-Artistic Monument and is the most significant Romanesque building in Salamanca, together with the Old Cathedral. As part of this intervention, which has involved an investment of 356,000 euros, monitoring of the space was decided upon in order to provide real data on its condition. The first sensors were installed in 2015 and the behaviour of the building has been observed since then.

With the extension of the Atlantic Romanesque Restoration Plan, it was decided to continue with the actions to improve the building. 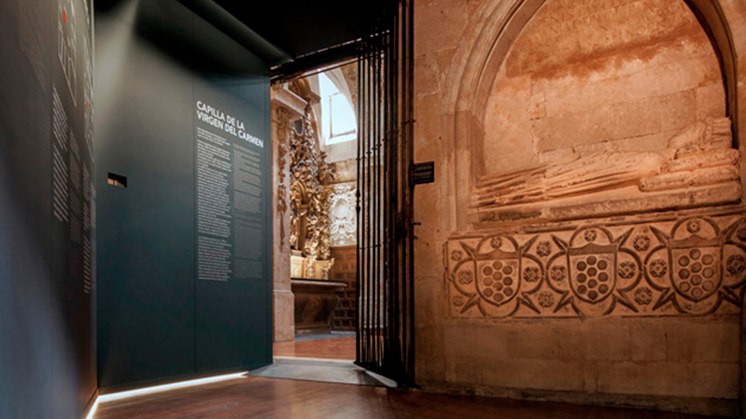 In September 2020, work on the roof was completed, the weight of which was redistributed by modifying its support points

External link, opens in new window. to ensure the safety and stability of the building. A double ventilation system was also installed to regulate the temperature and minimise the building's humidity problems. To carry out this work, which lasted eight months, approximately 400,000 euros was invested.

Urgent measures were previously taken to alleviate the problems of landslides and loss of structure, the access through the north door of the church was restored and an information and reception point was created. An additional project to restore and illuminate the interior of the church was also submitted, which will be carried out in the next phase.

The Atlantic Romanesque Plan has also financed other restoration projects such as on Saint Peter of the Ship church (El Campillo) and the church in Sejas (Sanabria), both in the province of Zamora.

Publicising the plan and cultural heritage

On the other hand, in June 2019, an information point relating to the plan was inaugurated next to the monastery of Saint Mary the Royal in the Zamora town of San Martín de Castañeda. The space serves as a visitor reception centre and explains the history of the building and the different actions undertaken within this initiative, highlighting the importance of new technologies in the conservation of heritage.

External link, opens in new window. has also been installed to control and improve the preventive conservation of the building, while guaranteeing energy efficiency.

The Atlantic Romanesque Plan also offers cultural activities to promote awareness, revitalise interest and publicise the heritage of the areas in which it acts. In August 2019, a concert took place in this church for the sixth consecutive year. 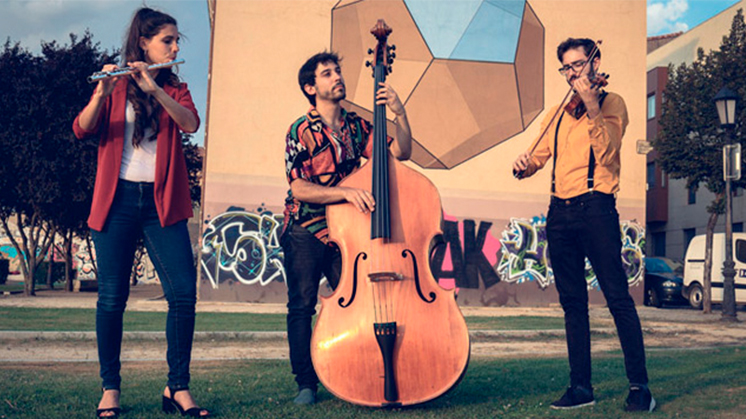 External link, opens in new window. was also launched with the aim of publicising the plan and raising awareness regarding the actions carried out on the Our Lady of Saint Mary church. Educational seminars, visits and cultural activities were some of the events, which led to the creation of an information and visitor reception point at the Door of Forgiveness to the cathedral.

The Christmas concert held in 2017 in the cathedral itself was also one of the project's actions. 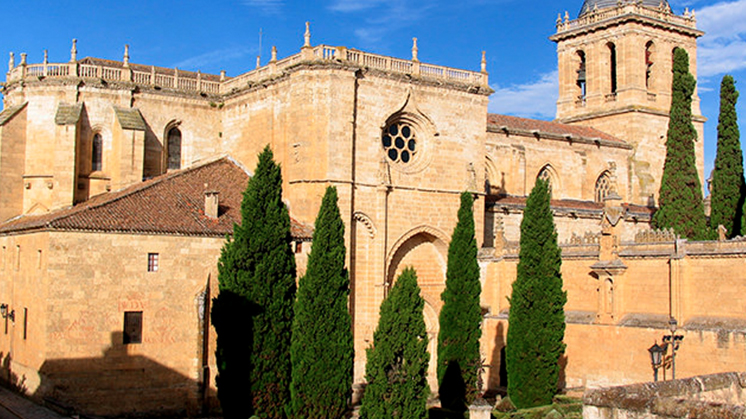 Iberdrola has signed an agreement worth €44,700 for the complete restoration of the altarpiece of Saint Anthony of Padua

External link, opens in new window., in the parish church of Ceclavín (Cáceres).The project will improve the conservation and promotion of the altarpiece of St. Anthony of Padua, which is currently dismantled and in storage on the parish premises, so that it is placed back in the central nave. The restoration work will also include the images of the Holy Trinity, Saint John the Baptist and the Virgin of Remedies. 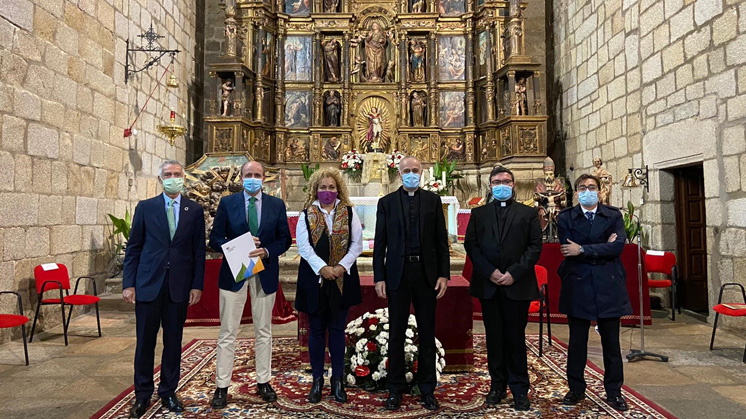 PATRON OF THE PRADO RESTORATION WORKSHOP

Iberdrola has also collaborated with the Prado National Museum

External link, opens in new window. since 2010, when it became a Patron of the Paintings Restoration Workshop. Since then it has progressively extended its collaboration to new areas such as the Lighting the Prado project and the granting of annual scholarships for research into restoration, not to forget our support or the program of conservation and restoration of the museum.

IBERDROLA - MUSEUM PROGRAMME WITH THE BILBAO MUSEUM OF FINE ARTS

Since 2013 the Iberdrola - Museum Programme of Conservation and Restoration has been working to keep the Bilbao Fine Arts Museum collection in an optimal state of conservation. To achieve this, a selection of works are chosen every year that need attention and represent different chronological points and varying artistic techniques.

In addition, in 2019 a new line of work was added for works of art which, though not belonging to the museum's collection, form part of the temporary exhibitions. This was the case for a selection of paintings belonging to private collections which were included in the exhibitions Ameztoy and Masterpieces of the Valdés collection.

Finally, the programme is extending its mission through the training of future professionals who, thanks to the Iberdrola - Bilbao Fine Arts Museum grant, are developing their knowledge and experience in the Department of Conservation and Restoration. 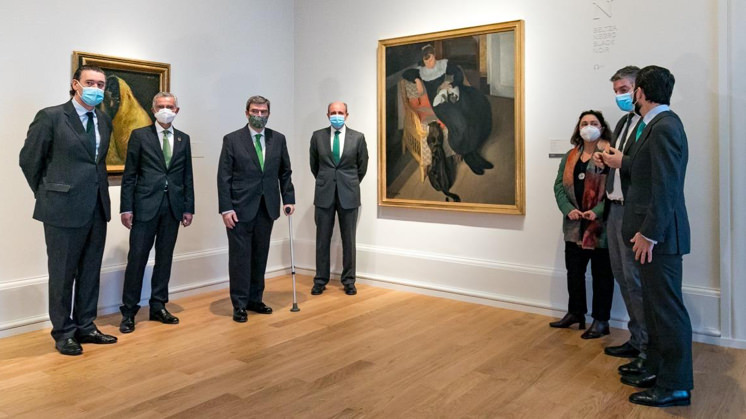 From left to right, Miguel Zugaza, director of the Bilbao Museum of Fine Arts; Fernando García Sánchez, president of the Fundación Iberdrola España; Juan Mari Aburto, mayor of Bilbao and president of the Bilbao Museum of Fine Arts Foundation; Ramón Castresana, director of the Fundación Iberdrola España; María José Ruiz-Ozaita, head of the museum's Department of Conservation and Restoration; Javier Novo, coordinator of Conservation and Research; and Rafael Orbegozo, advisor to the Chair of Iberdrola and member of the Museum's board of trustees, during the act of presentation of the 2021 Iberdrola - Museum Programme.

In 2020 work was carried out on recently acquired pieces which are now on public display for the first time. Such is the case for the paintings Paisaje con pastor by Ignacio Iriarte — recently acquired thanks to the contribution from the Friends of the Museum; Playa de Sopelana and Paisaje con montañas by Juan de Barroeta; La fábrica de Pasajes by Gonzalo Chillida and Montmartre sous la neige by Jean-François Raffaëlli; and the prints by Joaquim Sunyer and Marta Cárdenas. To these can be added familiar works from the collection signed by Ángel Larroque, Remigio Mendiburu and Pablo Milicua.

Separately, and with the future extension of the museum in mind, a new introductory programme has been launched to inform about the museum's architecture and the artistic heritage surrounding it through guided tours of the exterior.