An investment of more than 37 million euros will include installing hydrogen plants in Victoria, Bilbao and San Sebastián, fed by three on-site photovoltaic plants for self-consumption 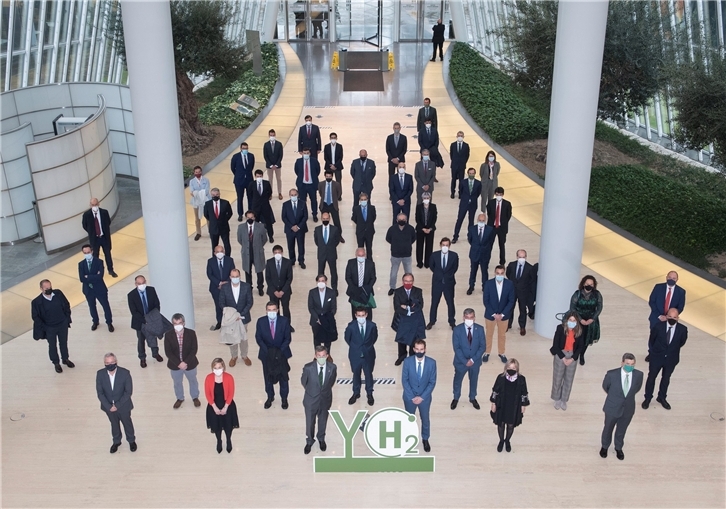 Iberdrola is planning the Y Basque Green Hydrogen Initiative: a corridor that entails building three hydrogen generation plants in the logistical centres of Vitoria/Júndiz, Bilbao and Pasaia for the purpose of facilitating the decarbonisation of heavy road transport, buses and light industrial vehicles, as well as for port and airport use in the region and in the chemical industry.

The project, which will be for public use, will be modular and expandable, will involve an investment of more than 37 million euros and include the construction of electrolysers with a 10-MW capacity, to produce a total of 4,000 kg/day of green hydrogen, as well as on-site photovoltaic plants for self-consumption which, added to the renewable energy supplied by Iberdrola, will allow these facilities to supply 100% renewable, emission-free energy.

The initiative also envisages the incorporation of energy storage equipment, in the form of smart batteries, to accumulate the surplus photovoltaic production not consumed by the plants, in order to feed it into the grid or use it for hydrogen production at optimal times.

The project has been submitted to the EU Next Generation programme and has the institutional support of the Basque Government, the Provincial Councils of Araba, Bizkaia and Gipuzkoa and Vitoria-Gasteiz City Council, as well as the ports of Bilbao and Pasaia. It is also supported by Basque businesses or those operating in the Basque Country, such as Acotral, Aena, Alsa, Avanza, CAF, Disfrimur, Irizar, Lascaray, MFS, PepsiCo, Primafrío, Solaris, Tecniruta, Transportes Mazo, 686 Transportes Logísticos y Portuarios and Transportes Saavedra.

“These developments will contribute to creating a cross-sectoral project to drive a sustainable industrial model based on green hydrogen. It should also reduce national energy dependence as it is based on renewable energy produced with domestic resources and will boost synergies between the logistics, energy and industrial sectors", explains Millán García-Tola, Iberdrola's global hydrogen director. It should also allow progress towards greater airport-port-city integration, fostering green hydrogen-powered mobility and generating technical/scientific knowledge.

The project should generate 1,700 direct and indirect jobs during its construction and operation, as well as contracting services and purchases from more than 30 local suppliers.

The project will join those presented by Iberdrola in Zaragoza and the Mediterranean Corridor, and the one being operated by the company in Zona Franca de Barcelona (Free Zone), where it will install and exploit a hydrogen plant for ten years to fuel buses run by Transports Metropolitans de Barcelona (TMB) and other fleets and industries on the industrial estate.

The Y Basque Green Hydrogen Project is one of 175 projects the company has either presented to the EU's Next Generation programme or which are already included in the programme. These projects could mobilise investments of 30 billion and involve more than 350 small- and medium-sized companies in Spain, generating more than 60,000 jobs a year. These projects include 53 initiatives related to hydrogen, which could activate investments of 2.5 million to achieve an annual production of 60,000 tn/year.

Iberdrola has been leading the energy transition for two decades, acting as a key driving force to transform the industrial fabric and in the green recovery of the economy and employment. The company has thus launched a historic investment plan with a value of 150 billion euros over the next decade, 75 billion euros by 2025, to triple its renewable capacity and double network assets and take advantage of the opportunities offered by the energy revolution that the world's leading economies are facing.

In Spain, investments to 2025 amount to 14.3 billion euros, mainly for the deployment of an ambitious plan for renewables and smart grids. In Spain, it is the leader in the renewable sector with an installed capacity of 16,700 MW, which will increase to 25,000 MW with its investment plan up to 2025.

Investments worth 120 billion euros over the last twenty years has made Iberdrola a leader in renewable energy with nearly 35,000 MW installed worldwide, a volume that makes its generation fleet one of the cleanest in the energy sector.

With emissions of 98 gCO2/kWh, we are already two-thirds lower than the European average, and the strategy of investing in clean energy and networks will lead Iberdrola to be a “carbon neutral” company in Europe by 2030.

Iberdrola is a leading global energy supplier – the third-largest by market capitalisation in the world and the leader in renewables – championing the energy transition towards a low-emissions economy. The group supplies energy to around 100 million people in dozens of countries and has renewable, grid and commercial activities in Europe (Spain, the UK, Portugal, France, Germany, Italy and Greece), the US, Brazil, Mexico and Australia, and is growing in markets including Japan, Ireland, Sweden and Poland, among others, as growth platforms. With a workforce of more than 37,000 and assets of over €122 billion, it recorded turnover in excess of €33 billion and net profit slightly exceeding €3.61 billion in 2020. The company contributes to the maintenance of 400,000 jobs in its supply chain, with an annual procurement budget of €14 billion. A leader in the fight against climate change, Iberdrola has committed more than €120 billion over the last two decades to building a sustainable energy model based on sound environmental, social and governance (ESG) principles.