Law in the Military

LAW IN THE MILITARY

'Army and Law in the Early 20th Century' 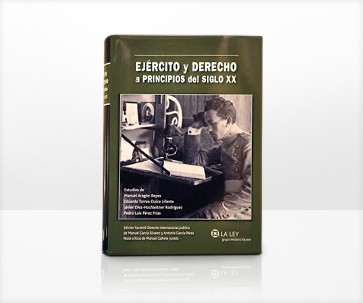 Iberdrola and the publishing house La Ley are once again partnering in the publication of a legal book: Ejército y Derecho a principios del Siglo XX (Army and Law in the Early 20th Century). This work joins other notable publications that reflect how important Law is for the company as an absolutely essential discipline, which covers every single aspect of society.

Ejército y Derecho a principios del siglo XX shows the importance and repercussion that Law applied to military matters has had in society. Key topics for understanding the history of Spain in the 20th century, particularly the armed conflicts that defined a convulsed and changing century, are reflected in this unique work. The historical evolution of International Law, the most relevant legal-penal aspects and the analysis of numerous treaties and conventions that took place in that period are some of the most important areas analysed in this volume.

The book includes the facsimile edition of Derecho Internacional Público (Public International Law), an essential work in the teaching of this branch of law since 1909, and a series of studies by reputed experts, in order to complete the overall view of International Law and Humanitarian Penal Law:

The Head of the General Staff, Fernando García Sánchez, and the company's chairman, Ignacio Galán, presented in Madrid the book Ejército y Derecho a principios del siglo XX at a ceremony that was also attended by the president of the Constitutional Court, Pascual Sala; the director of Public Prosecutions and co-author of the work, Eduardo Torres-Dulce; the vice-president of the Constitutional Court, Ramón Rodríguez; and the co-authors Manuel Aragón, Javier Díez-Hochleitner, Pedro Luis Pérez Frías and Manuel Gahete, with the head of the School for Higher Defence Studies, Tomás Ramos Gil de Avalle, hosting the event.

During the event, Galán emphasized the evolution of the Spanish army, according to his words, which has become a modern institution which shares with Iberdrola its commitment to society.