Iberdrola group works intensively within the framework of the global and regional debate on climate policies, participating actively in the main milestones of the global climate agenda. 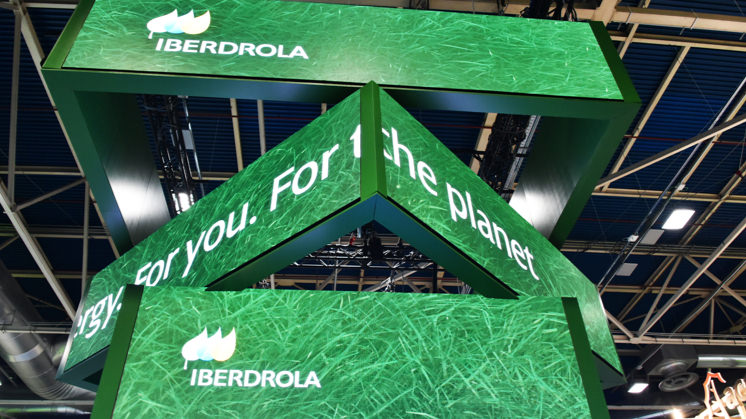 Summary of Iberdrola's participation in COP25.

WARMING UP FOR THE COP26

Iberdrola is working intensively on the COP26 to be held in Glasgow from 1 to 12 November 2021 by example and through various campaigns and activities, to support an ambitious approach when renewing political commitments, the so-called nationally determined contributions or NDCs, which countries adhered to under the 2015 Paris Agreement.

In this regard, the group's UK subsidiary, ScottishPower

External link, opens in new window., has confirmed its participation as principal partner

External link, opens in new window. of the COP in Glasgow, where its corporate headquarters are located. In view of the success of this summit, the COP26 Presidency has set out to work with companies that stand out for having credible, science-based emission reduction plans in line with the objectives of the Paris Agreement. ScottishPower is investing in low carbon assets and infrastructure to achieve a decarbonised economy by 2050.

CELEBRATING THE FIFTH ANNIVERSARY OF THE PARIS AGREEMENT 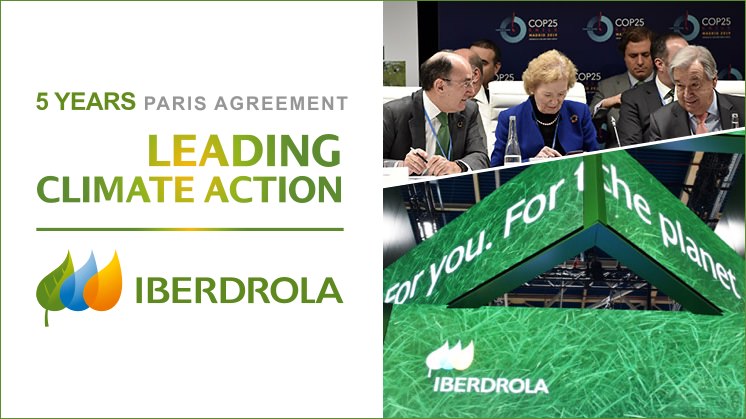 Iberdrola group, a pioneer in the fight against climate change, commemorates the fifth anniversary of the Paris Agreement.

After 20 years of negotiations, on 12 December 2015, within the framework of COP21, 195 countries agreed in Paris to limit the increase in global temperature to below 2 ºC by the end of the century and to continue with efforts to ensure that the planet's temperature does not rise above 1.5 ºC. They are thus committed to reaching the peak in greenhouse gas emissions as soon as possible and from there, beginning to reduce them towards climate neutrality.

Fifteen years before this historic milestone, Iberdrola had already placed the fight against climate change at the core of its strategy. The company has therefore been fully aligned with the commitments of the Paris Agreement for two decades, with a strategy based on generating clean energy and developing networks that transport this energy to the end consumer.

The group has worked intensively on energy decarbonisation, showing explicit support at the highest level for the goal of carbon neutrality by 2050, convinced of the opportunities it represents for creating value and prosperity. Iberdrola has quadrupled its renewable capacity and reduced emissions intensity by 75 %, in addition to closing its coal plants, obtaining funding through green and sustainable products and participating in forums, alliances and international organisations that defend the fight against climate change. All of this has enabled Iberdrola to lead the transition towards climate neutrality in all areas of the company's activity.

This new decade is vital if we are to meet the objectives of the Paris Agreement. Therefore, the investment plan of €75 billion announced by Iberdrola for the 2020-2025 period — that will increase to €150 billion in 2030 —, in addition to its commitment to recovering from the current crisis, focuses on decarbonising the economy, as well as increased electrification, 90 % of which is aligned with the European Union green taxonomy. Our strategy of investing in clean energy and networks will lead us to being carbon neutral in Europe by 2030 and to reducing CO2 emissions globally to 50 g/kWh. Our goal is to be a carbon neutral company in global terms by 2050.

To coincide with the fifth anniversary of the Paris Agreement, Iberdrola held a global virtual event in December 2020, Leading Climate Action, during which group chairman, Ignacio Galán, stressed that the company "must continue to lead the way" towards a future with zero emissions. The meeting served to tackle the most pressing aspects on the subject of the climate emergency, such as the state of climate science, the progress of international negotiations, the importance of alliances to drive forward the political agenda, and the key role of the technological revolution to make all this possible.

Iberdrola's support in this area is especially important in the context of the European Union, where an intense political debate has taken place that has culminated in the formal approval of the 2050 climate-neutral objective [PDF] External link, opens in new window. and the launch of the European Green Deal in December 2019, which places the European Union as the largest economic area committed to a neutral climate and a sustainable growth model. 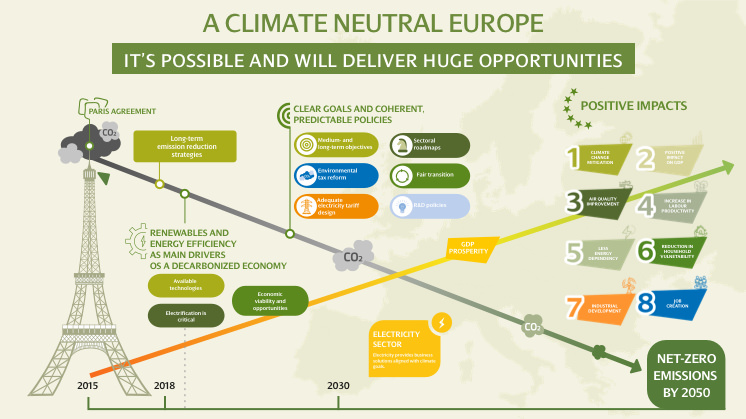 Iberdrola's vision on achieving the goal of zero net emissions by 2050.

In addition, to mark the fifth anniversary of the Paris Agreement, the European Round Table for Industry (ERT), a group comprising the top European industrial leaders — including the chairman of Iberdrola group —, released a publication entitled Making the most of Europe's climate leadership

External link, opens in new window.. In it, 57 business heads from some of the major industrial and technological companies from the Old Continent declare their support for a climate neutral Europe by 2050 and for the target of a 55 % reduction in net greenhouse gas emissions by 2030, backed up by solid industrial policy.

Iberdrola, together with 11 other European companies, has also joined the European CEO Alliance, an initiative that supports the objectives of the Paris Agreement for 2050, the EU Green Pact and greater ambition for the Union's climate targets.

Evolution of the electricity sector since the Paris Agreement

Since signing the Paris Agreement in 2015, much progress has been made in this direction: plans by governments for decarbonisation, involving top world leaders in advocating for a more ambitious approach, support from the business community and from civil society, etc. The political and social momentum over the last five years has been accompanied by a strong technological revolution of climate solutions in all areas of the economy, especially in the electricity sector.

The cost of photovoltaic solar energy and offshore wind has been reduced by more than 65 % and the cost of onshore wind by 33 %. This has made it possible to reach almost 700 GW of installed power from renewables worldwide. Also, batteries are now 55 % cheaper than five years ago, making it possible for the electric vehicle to take off (four times as many are being sold today).

OTHER ACTIVITIES ON THE CLIMATE AGENDA

The health and financial crisis resulting from COVID-19 has caused all the activities on the climate agenda to focus on the fusion that has occurred between the climate and the economic debates, with the aim of ensuring that financial recovery leads to a robust, sustainable and resilient economy.

Despite the exceptional circumstances caused by this crisis, the activity of the global climate agenda is still intense, given the need to continue to mobilise the international community towards achieving the Paris Agreement targets. So, a wide range of international events, campaigns and political milestones — some in a virtual environment — continues to roll out, and Iberdrola continues to be involved in them, with participation at all levels. Within this scenario, the Secretariat of the UNFCCC — backed by the COP26 Presidency and the Climate Champions — held a series of activities from 1 to 10 June 2020, open to society at large. These served as a platform for exchanging information on the progress of work being carried out by different countries and organisations, and for renewing alliances aimed at achieving climate neutrality by 2050.

This last point served as the basis for the campaign Race to Zero driven by a series of events between 9 and 19 November updating and strengthening the commitments assumed by businesses, governments and other non-governmental agents at the 2019 UN General Assembly and at COP25 in Madrid. During these events, Race to Zero Dialogues a wide variety of stakeholders from different backgrounds — businesses, NGOs, governments, institutions, etc. — contributed their vision on how to move towards an economy with zero net emissions from different sectoral perspectives: finance, energy, industry, etc.

External link, opens in new window." (23 November to 4 December 2020). Organised by the United Nations Framework Convention on Climate Change (UNFCCC), these meetings and events spurred on the formal negotiations process and public action.

External link, opens in new window., the main international coalition in defence of climate action from a business perspective, has presented a report under the title Climate Leadership Now [PDF] External link, opens in new window., where Iberdrola stands in a very prominent position as a result of its intense participation in campaigns, declarations, alliances and powerful lobbying in favour of climate ambition.

External link, opens in new window. and the delivery of its Manifesto against climate change with the main lines of action in the fight against global warming. 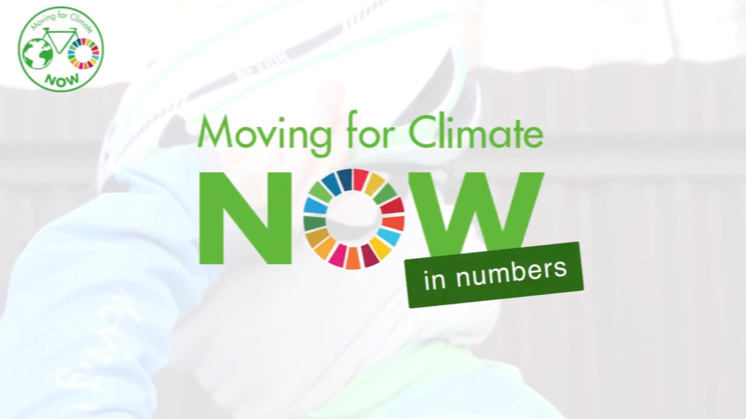 More than 180 people from over 70 entities have participated in the five Moving for Climate NOW editions. 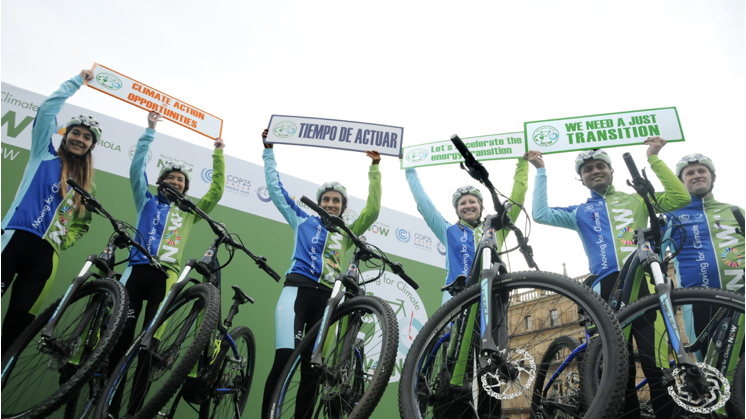 The goal of Moving for Climate Now is to raise awareness of the importance of urgently fighting climate change.

More than 180 participants from more than 70 entities have taken part in its five editions and they have travelled over 4,200 kilometres and from 37 cities all with the aim of raising awareness about the importance of fighting climate change as a matter of urgency.

Coinciding with the fifth anniversary of the Paris Agreement, on 3 December Iberdrola participated in the 2020 Climate Dialogues

External link, opens in new window. by means of a virtual meeting in which the group's chairman, Ignacio Galán, presented the Manifesto to the Executive Secretary of the United Nations Framework Convention on Climate Change (UNFCCC), Patricia Espinosa. The event was attended by the High Level Climate Champions, Gonzalo Muñoz and Nigel Topping, and could be followed live on YouTube 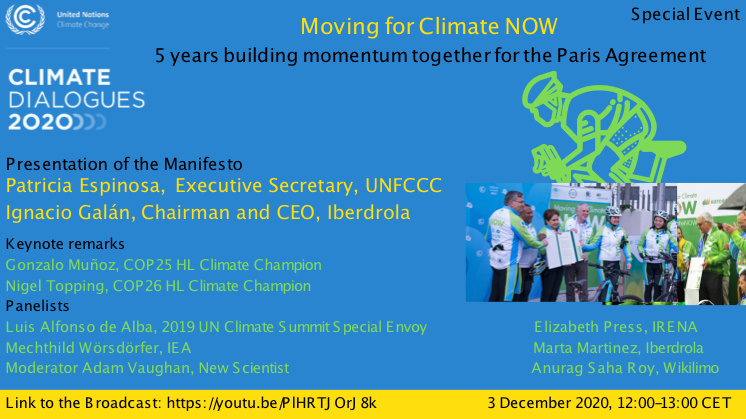 Iberdrola delivered the Manifesto to the UN in a virtual event. 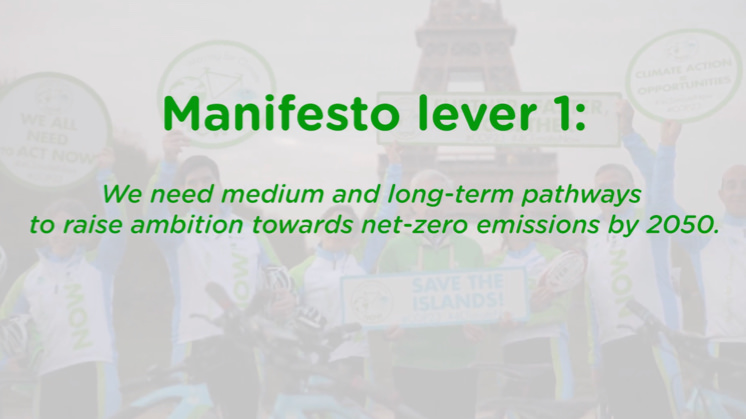 Manifesto lever 1: We need medium and long-term pathways to raise towards net-zero emissions by 2050. 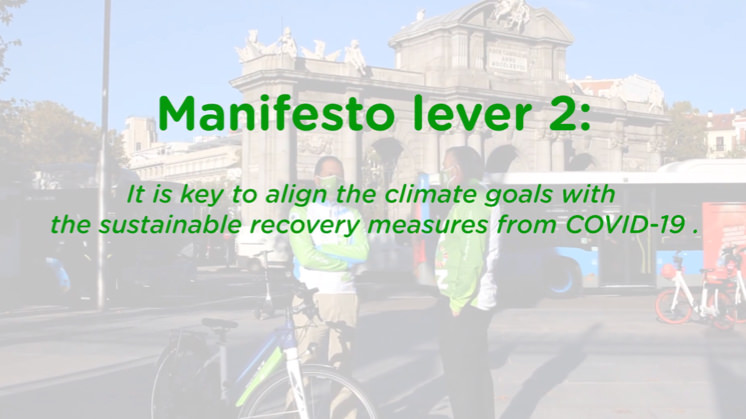 Manifesto lever 2: It is key to align the climate goals with the sustainable recovery measures from COVID-19. 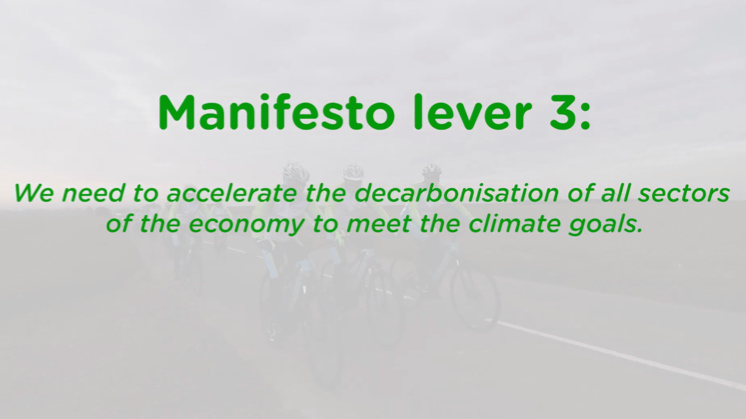 Manifesto lever 3: We need to accelerate the decarbonisation of all sectors of the economy to meet the climate goals. 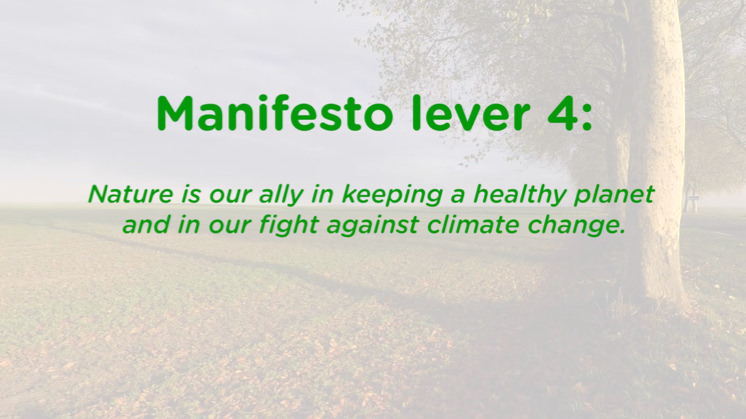 Manifesto lever 4: Nature is our ally in keeping a healthy planet and in our fight against climate change. 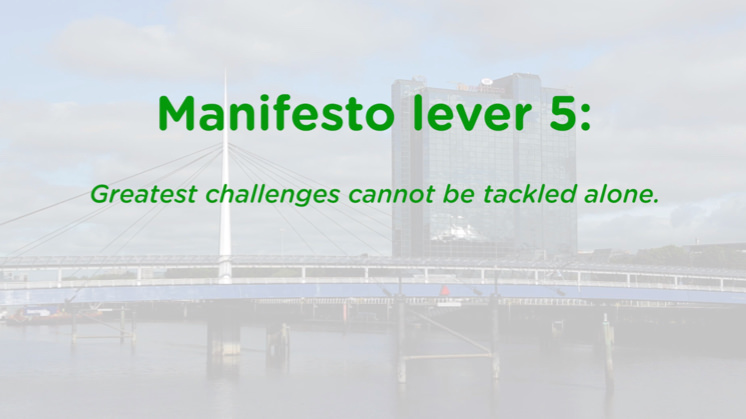 Galán stressed that "it is not enough to set long-term goals" but that "we need to act now and do so together through public-private partnerships". The Manifesto has five levers for change: medium and long-term roadmaps, alignment of recovery plans with climate objectives, acceleration of decarbonisation in all economic sectors, nature-based solutions and creation of partnerships.

THE IMPORTANCE OF THE COPs IN THE FIGHT AGAINST CLIMATE CHANGE

Over the course of successive Conferences of the Parties — known as COP — new elements have been introduced into the international structure in the negotiations on climate change. These elements allow for specific challenges to be tackled such as mitigation and adaptation to climate change.

The United Nations Conference on the Environment and Development, held in Rio de Janeiro in 1992, demonstrated the international consensus for addressing the problem of climate change. This was the context behind establishing the United Nations Framework Convention on Climate Change (UNFCCC). It was initially signed by 166 countries, but 197 have now ratified it.

Since 1992, different milestones have been reached in the various negotiations. The text of the Paris Agreement was finally approved on 12 December 2015; it is a legal pact containing the elements required to construct a global strategy to combat climate change from 2020 onwards.

FIND OUT ABOUT OUR PARTICIPATION IN THE LATEST COPS

The conference focused on climate and energy scenarios to help limit the global temperature rise to below 1.5 °C.

Bases for activating the Paris Agreement

It was key to designing the instruments that enable the climate goals to be tackled and achieved effectively and efficiently.

After the signature of the Paris Agreement, this summit was the kickstart for its implementation and for the approval of a collaboration framework with non-state agents.

Timetable for the principles of the Paris Agreement

The timetable envisaged that the rules governing the agreement should be concluded in 2018, two years before its launch. The drafting of these rules was crucial at the conference.

The meeting was crucial and led to a new international climate agreement, applicable to all countries, to keep global warming below 2 °C.