Climate negotiations: 25 years of searching for consensus on the fight against climate change

Over the course of successive Conferences of the Parties — known as COP — new elements have been introduced into the international structure of the negotiations on climate change. These elements allow for specific challenges to be tackled such as mitigation financing, adaptation to climate change, and the technological transfer. 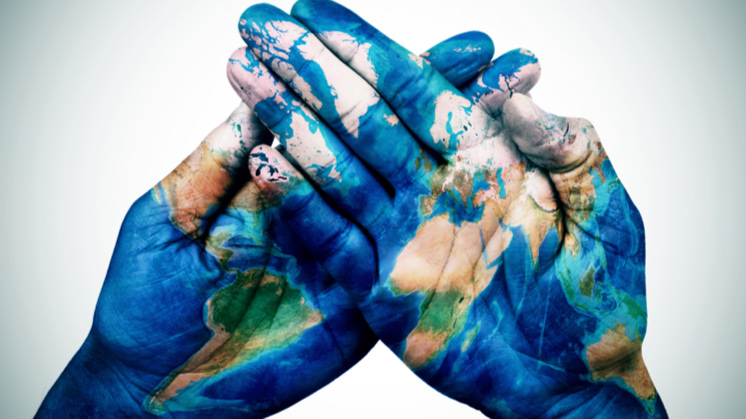 Limiting the global temperature rise to under 2ºC compared to the pre-industrial era is one of the targets.

The United Nations Conference on Environment and Development, held in Rio de Janeiro in 1992, was a reflection of the international consensus when it came to approaching the problem of climate change. During the summit, the United Nations Framework Convention on Climate Change (UNFCCC) was created, which was initially signed by 166 countries and finally came into force on 21 March 1994. As of today, its has been ratified by 197 countries.

FROM THE KYOTO PROTOCOL...

The Kyoto Protocol can be defined as the putting into practice of the UNFCCC. At the time, it represented the first global commitment to reigning in the emissions responsible for global warming and established the bases for subsequent international accords on climate change. Although the Protocol was signed on 16 March 1998, it did not come into effect until 16 February 2005. 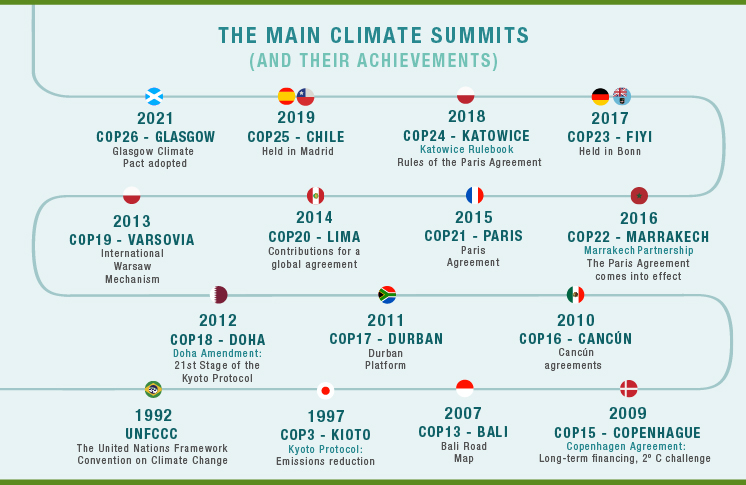 The main climate summits and their achievements.

As can be seen from the above graphic, since 1992 other milestones have been reached in the course of negotiations at events like the COP (Conference of the Parties). Below are the most significant agreements on climate change:

TO THE PARIS AGREEMENT

On 12 December 2015, the text of the Paris Agreement was approved, a legally-binding pact containing all the elements necessary to build a global strategy for the fight against climate change for the post-2020 period — the period prior to 2020 being covered by the second stage of the Kyoto Protocol (the Doha Amendment). Some of the main points are summarised below:

Long-term goals
A target has been set to limit the global temperature rise to under 2ºC by the end of the century compared to pre-industrial era levels, leaving the door open to extend this target to 1.5ºC.

National contributions
It obliges all the signatory countries to present National Climate Contributions that must be regularly updated by making them increasingly ambitious so as to meet the defined long-term target.

Interchange of emissions reductions between countries and indication of the price of CO2
It includes provisions to leave the door open both to emissions exchanges and to advances in the development of carbon pricing schemes. Under the heading of “cooperative approaches”, the possibility is established of an international transfer of mitigation results (international emissions trading) and the creation of a mitigation and sustainable development mechanism.

Financing
It maintains the obligation on developed countries to continue to lead in providing finance, but, for the first time, "other parties" are called upon to give voluntary financial support. This urges developed countries to draw up a specific road map to allow the annual target of $100bn of climate finance to be reached by 2020.

Monitoring, reporting and verification (MRV) of the actions carried out
It includes a framework of transparency which will not be intrusive or punitive, but that must serve to create confidence among the various players. It also establishes that from 2023, the UN will produce a report (global stocktaking) every five years on the implementation of the agreement and the progress made — impact of climate contributions, mobilisation of financial and technological resources, global temperature forecasts, etc.

Technology transfer
It recognises the need to speed up the technological transfer to developing countries and states that available technical and financial mechanisms will be used. Measures are announced to strengthen the existing mechanism which, based on the technological needs to reach an emissions path compatible with the 2ºC target, will establish the principles for incentivising it in developing countries.

Adaptation
The parties are urged to undertake adequate planning and implement measures to establish, in the case of developing countries, the necessity for financial and technical support for its fulfilment.

Completion of the implementation of the Paris Agreement has been going on over recent years, one of the main milestones being the approval of the Paris Agreement Rulebook (Katowice Rulebook) during the Katowice Climate Summit (COP 24). This document allows, among other things, the different information and commitments to become operative and be compared like for like; supervision over compliance with the Agreement to be established, global diagnosis methodology to be developed; the matters of adaptation and technology transfer to be stepped up; and negotiations with the aim of obtaining climate finance to be launched in the run-up to 2025.