The action is part of its commitment to creating value in Extremadura, which has become the centre of its renewable development strategy in Spain 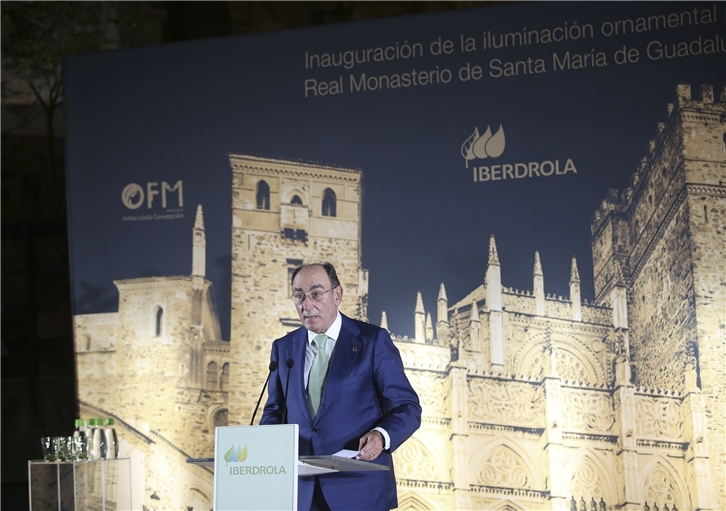 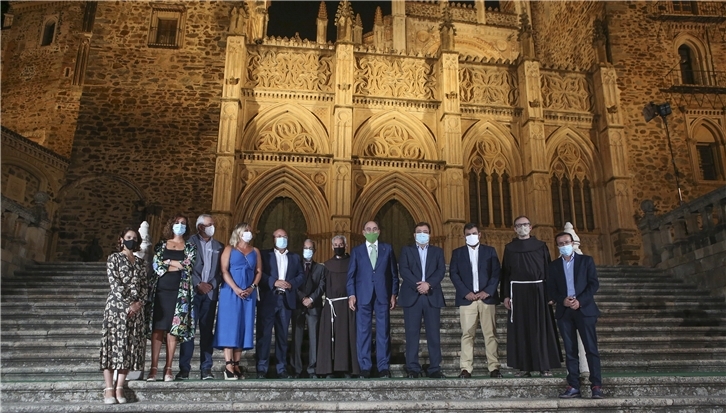 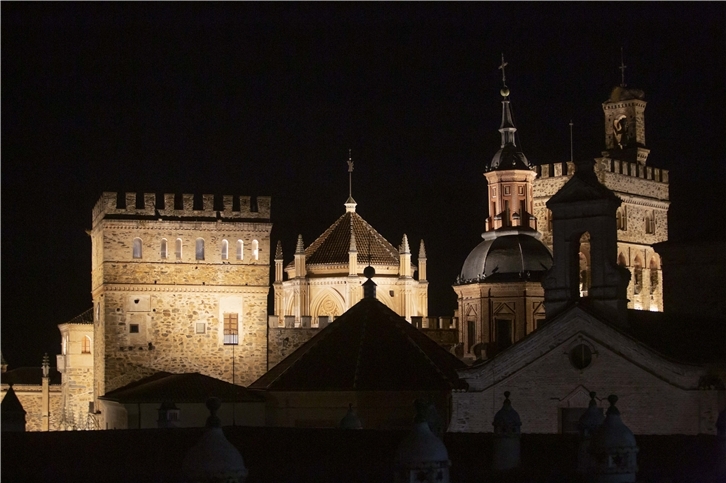 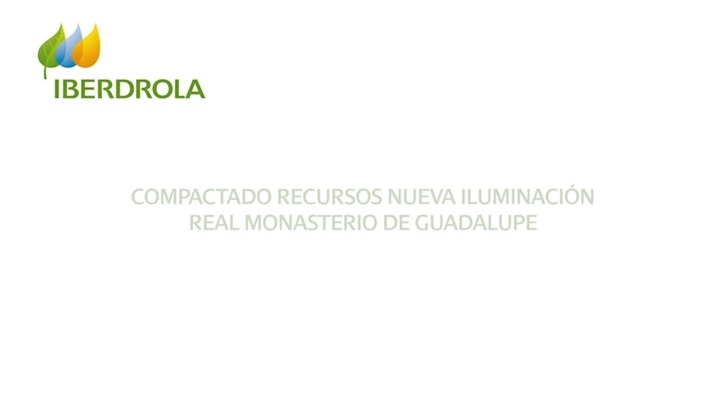 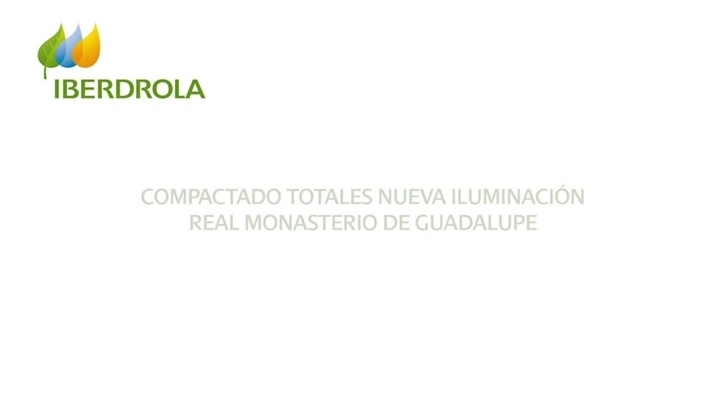 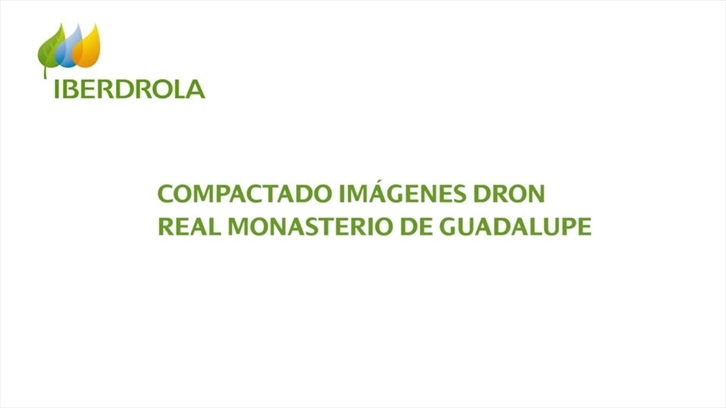 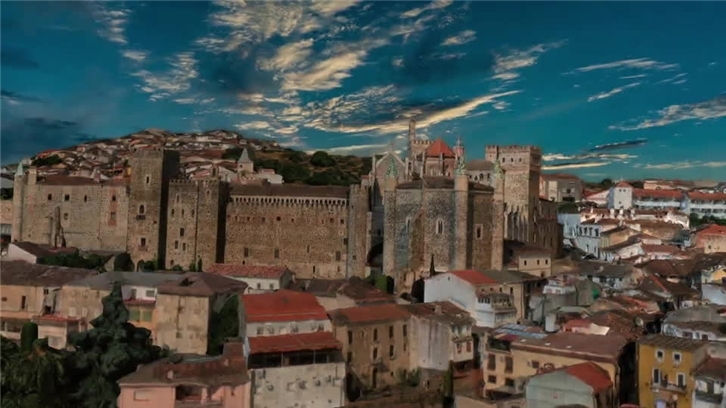 The Royal Monastery of Santa María de Guadalupe has premiered its new lighting after the completion of the project carried out by Iberdrola. Aimed at revitalising one of the greatest architectural symbols of Extremadura, which was declared a World Heritage Site by Unesco in 1993, the lighting highlights and enhances the profile of the monastery and modernises its exterior ornamental lighting.

The unveiling of the new lighting was attended by the chairman of Iberdrola, Ignacio Galán, accompanied by the president of the Regional Government of Extremadura, Guillermo Fernández Vara; the provincial minister of the Franciscan Province of the Immaculate Conception, Fr Juan Carlos Moya; and the mayor of Guadalupe, Felipe Sánchez Barba.

In his presentation, Ignacio Galán explained that “this work to preserve our historical-artistic heritage allows us to raise awareness regarding our origins and culture and promote quality tourism, which will be key to the economic recovery of regions such as this one”.

He also added that “promoting economic and social development is, for us, a responsibility and a commitment, with which we create sustainable value in all the regions in which we are present”.

The work carried out by Iberdrola over the last four months has helped to enhance the volumes of the architectural whole -with its Gothic, Mudejar, Renaissance, Baroque and Neoclassical styles- and enhance its heights and depths, after reinforcing the upper bodies of the monastery: towers, main façade with its crestings and dome.

The project also contributes to sustainability, by improving energy efficiency by 60% and avoiding the emission of 5.3 t CO2 per year.

The lighting combines the use of the most advanced LED technology, with careful installation and control of the luminous night glow. Likewise, the lighting perimeter of the monastery has been expanded, with the installation of 197 projectors.

This initiative are part of the Commemorative Programme to mark the 25th Anniversary of the Royal Monastery being declared a World Heritage site.

The action is part of Iberdrola’s commitment to creating value in the communities in which it operates, such as in Extremadura, which has become the centre of its renewable development strategy in Spain and where it will develop 2000 MW of renewables by 2022.

Following the commissioning of Europe's largest photovoltaic plant, Núñez de Balboa, Iberdrola is constructing another seven renewable energy projects in the region in the coming months, with a total capacity of 728 MW. It also has the 590 MW Francisco Pizarro plant in the pipeline. These actions will entail an investment of more than 1.5 billion euros and the creation of thousands of jobs in the community.

In Extremadura, the company already manages a dozen energy facilities with an installed capacity of 3,600 MW and it has more than 12,000 km of power lines, with which it serves more than 350,000 customers.

Iberdrola is the leader in renewable energy in Spain, with more than 16,600 MW installed – of which 6,000 MW are wind power –. Worldwide, the total amounts to 32,700 MW, making its generation facilities among the cleanest in the energy sector.

One of the Iberdrola's main areas of activity focuses on the care, conservation and promotion of historic and artistic treasures. The main objective of the Lighting Programme is to carry out work on unique buildings to install or improve indoor and/or outdoor lighting in order to help enhance Spain’s historical-artistic heritage.

Since 2011, the investment assigned to the Lighting Programme has surpassed 3 million euros, and has resulted in improvements to more than 40 monuments in Spain, including the Roman Bridge in Alcántara, Cáceres; the façade to the Congress of Deputies in Madrid; the Cathedral in Ávila and the interior of the New Cathedral in Salamanca.

Iberdrola is a global energy leader, the number one producer of wind power, and one of the world’s biggest electricity utilities by market capitalisation. The group supplies energy to almost 100 million people in dozens of countries including Spain, the United Kingdom (ScottishPower), the United States (AVANGRID), Brazil (Neoenergia), Mexico, Germany, Portugal, Italy and France. With a workforce of more than 35,000 and assets in excess of €122 billion, it achieved a turnover of over €36.4 billion and a net profit of over €3.4 billion in 2019. Iberdrola is championing the transition towards a sustainable energy model through its investments in renewable energy, smart grids, large-scale energy storage and digital transformation, to offer the most advanced products and services to its customers. Firmly committed to clean energy, Iberdrola is one of the companies with the lowest emissions and an international benchmark for its contribution to sustainability and the fight against climate change.