The chairman of Iberdrola, Ignacio Galán, urges a move from promises to action at COP 26

The chairman of Iberdrola, Ignacio Galán, urges a move from promises to action at COP 26 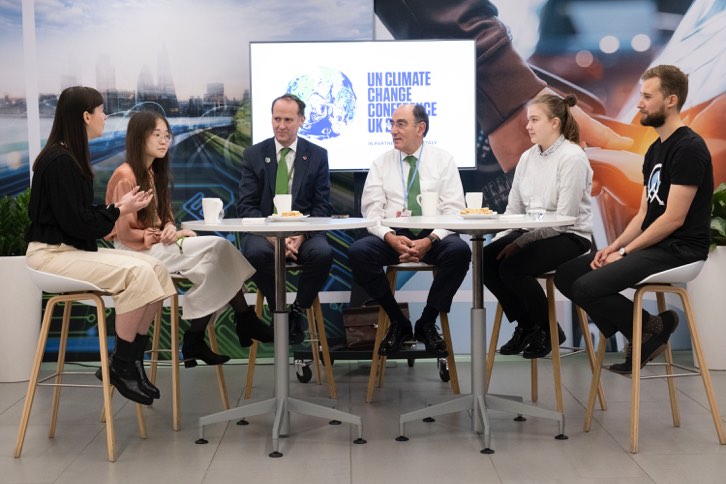 Ignacio Galán, in a meeting with young people at COP26.

The chairman of Iberdrola, Ignacio Galán, participated in the Caring for Climate meeting this morning. This is an initiative of the United Nations Global Compact, the United Nations Environment Programme and the Secretariat of the United Nations Framework Convention on Climate Change to enhance the role of business in tackling climate change , and is organised as part of COP26, of which the company is a patron.

During the meeting, which was also attended by the Secretary of the United Nations, António Guterres, Galán warned of the need to act immediately in the face of this climate emergency: "We have to move from promises to action", he said.

For 20 years, the company has taken on an important corporate role linked to climate change objectives based on renewable energy. So far, it has invested 120 billion euros to, among other things, generate elements of renewable energy production, promote the development of smart grids and create opportunities by transforming sectors such as shipbuilding.

This has contributed decisively to reducing emissions of polluting gases and improving air quality, achieving emissions that are six times lower than its European competitors, with a view to 2030, by which date it will have made a further investment of 150 billion euros aimed at achieving zero net emissions in Europe.

Iberdrola's commitment is resolute and objective, and it will triple its investment in renewables over the next 10 years with a clear goal: to do away with coal as a source of energy and opt for more sustainable and profitable solutions.

Achieving decarbonisation requires stable and consistent regulatory frameworks, aligned with climate objectives, but also the elimination of fossil fuel subsidies and the application of the “polluter pays” principle.

For Galán, it’s also essential to develop training programmes so that employees can adapt to this transition, but, above all, he believes that the complicity of public administrations is needed to put an end to the bureaucracy that unnecessarily lengthens the deadlines for some much-needed infrastructures.

The president also had the opportunity to talk with a group of young people participating in the Climate Summit to hear their concerns and proposals first hand, convinced that intergenerational responsibility is essential, which makes climate commitments urgent if we want to leave a decent world to future generations.

Aware of the climate challenge, many young people are demanding greater responsibility from the different social, business and political actors in order to achieve it, something that Galán highlights due to the commitment, effort and enthusiasm that it reflects.

For this reason, the chairman stressed the need to take advantage of the economic opportunities presented by this green transition without leaving anyone behind, promoting training in professions of the future to identify and create the jobs that are needed.

This morning's meetings took place during the day of the Climate Summit dedicated to transport, the main greenhouse gas emitting sector in developed economies and, at the same time, the sector that is making least progress in decarbonisation.

In this respect, the automotive industry is already making determined efforts, such as the manufacture of electric vehicles. In line with the social demand for sustainability in transport, Iberdrola has been committed from the outset to promoting the territorial deployment of charge points, but it is also developing solutions based on green hydrogen to avoid the use of fossil fuels for very long-distance transport.