Galán has conveyed his commitment to Andalusia to Juan Manuel Moreno: it will triple its renewable capacity in the region

Galán has conveyed his commitment to Andalusia to Juan Manuel Moreno: it will triple its renewable capacity in the region 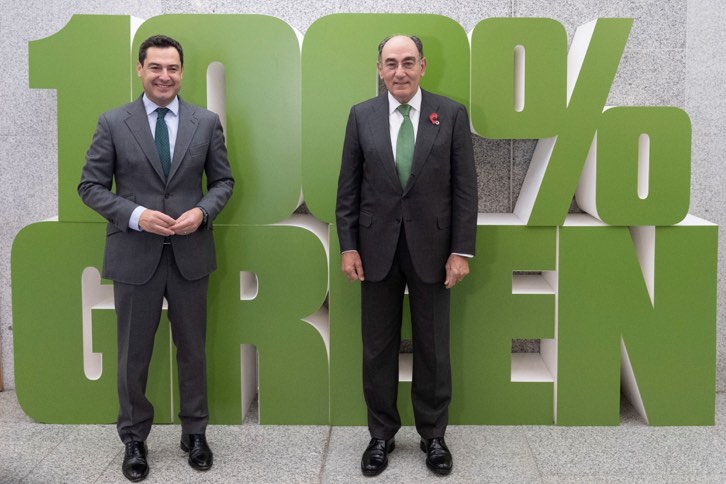 The President of the Regional Government of Andalusia, Juan Manuel Moreno, and the chairman of Iberdrola, Ignacio Galán.

Commitment to the energy transition and a cleaner community. This is the message conveyed by the chairman of Iberdrola, Ignacio Galán, to Juan Manuel Moreno, president of the Regional Government of Andalusia, at their meeting this morning during COP26.

Andalusia therefore becomes one of Iberdrola's major growth centres in Spain, where the company is already a leader in the generation of clean and green energy, therefore contributing to the energy transition and job creation in Spain. “This is Iberdrola's commitment: To drive a clean, safe and efficient energy transition and to join forces to accelerate a green recovery that leaves no one behind”, explained the Chairman.

An example of this commitment can be found in the Andévalo photovoltaic plant, which prevents the emission of 15,000 tonnes of CO2 into the atmosphere each year and the construction of which involved nearly 200 professionals. The project coexists within the largest wind power complex in Western Europe, El Andévalo (292 MW), promoted and managed by the company since 2010. The renewable electricity produced by the project allows Heineken to use 100% green, emission-free energy in its four factories in Spain and its offices. The plant has also been an example of biodiversity as it has accommodated 162 beehives, a pioneering circular economy initiative that allows for the responsible use of natural resources, while promoting the sustainability of the environment.

Another example is the wind farms that the company will build between the provinces of Malaga and Seville, with a total installed capacity of 79 MW.

The first of the wind farms is El Puntal II, with 15 MW, which last week began construction in the municipality of Sierra de las Yeguas, in Malaga province. The facility will have three SG145-5 MW wind turbines, with a capacity of 5 MW each, making it the company's largest and most powerful wind turbines in Spain.

The second, the Martín de la Jara facility, with 36 MW of installed capacity, is located in this Sevillian municipality and will be made up of nine V150-4MW wind turbines. In the municipality of Estepa, Iberdrola will develop the 28 MW San Cristóbal wind farm, comprising four 4.5 MW and two 5 MW wind turbines.

The construction of these wind projects will mobilise suppliers and local employment, with more than 150 professionals estimated to be hired. Once in operation, the parks will generate enough clean energy to supply the equivalent of 70,000 households and avoid the emission of 39,200 tonnes of CO2 per year.

Other Iberdrola initiatives in the region will be associated with innovation and value chain development projects in sectors of the future. The company, together with Fertiberia, is developing a comprehensive plan to address a new technological challenge, the production of hydrogen for the manufacture of ammonia at Fertiberia's plants in Palos de la Frontera, Huelva. The alliance aims to place Spain at the forefront of green hydrogen in Europe and make it a technological benchmark. To develop the comprehensive plan - which will require European recovery funds - investments of 1.8 billion euros will be mobilised by 2027.

Iberdrola continues to make progress with its sustainability strategy, based on the electrification of the economy and oriented towards the fight against climate change and the creation of wealth and employment in the communities in which it operates.

The company, the main partner through ScottishPower of COP26, which will be held in Glasgow between 31 October and 12 November 2021, plans to invest 150 billion euros until 2030, and therefore remain at the forefront of the energy revolution facing the world's leading economies. The company is moving forward with its historic €75 billion investment plan until 2025 and consolidating its business model, based on more renewables, more grids, more storage and more smart solutions for customers.

After twenty years promoting the energy transition, Iberdrola is the leader in renewable energy in Spain, with an installed capacity of more than 19,000 MW of renewable energy by September 2021; a volume that in the world amounts to almost 37,300 MW, making its generation park one of the cleanest in the energy sector.