Ignacio Galán: "We must act together against climate change"

At the COP 26 Powering Past Coal Alliance meeting

Ignacio Galán: "We must act together against climate change" 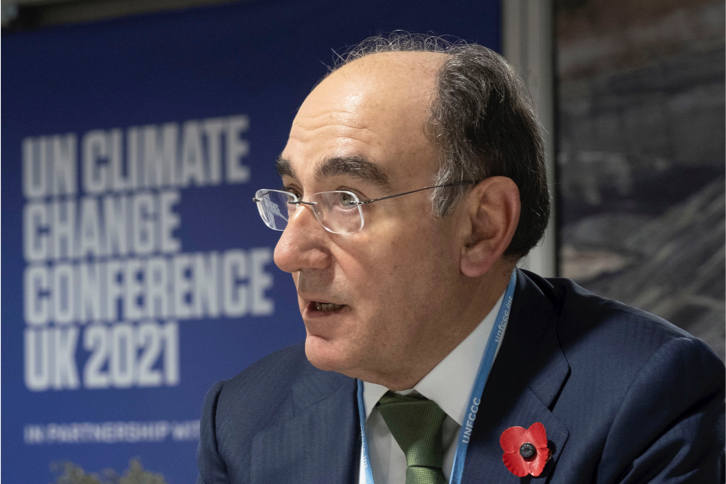 The chairman of Iberdrola, Ignacio Galán, took part in the Powering Past Coal Alliance (PPCA) event this morning. The coalition of governments and companies was set up in 2017 to promote policies and investment plans aimed at phasing out of coal as a source of energy to progress with the implementation of clean energies.

On behalf of Iberdrola, he has signed an International Declaration calling for the abolition of this raw material, in line with this year's United Nations Climate Change Conference, on the understanding that this measure is fundamental to advancing in the commitment to keep global warming on the planet to a maximum of 1.5 degrees.

Iberdrola is a pioneer in the energy transition and was one of the first companies to join the Powering Past Coal Alliance, a decarbonisation commitment that will facilitate the shift from using fossil fuels to renewables.

In this regard, Galán says that this is a crucial moment for the planet, which has its sights set on 2050 when greenhouse gas emissions must have been reduced to zero. The target is to reduce these emissions by 45% within the next ten years.

The chairman insisted on the obligation to work together to phase out coal-fired power plants immediately and replace them with renewable electricity to protect the planet.

The company is a trail-blazer on the road to sustainability, having advocated for renewable energies for the last 20 years. Along the way, Iberdrola has closed 17 coal and oil-fired power plants and has invested around €120 bn in clean energies, smart networks and digitalisation, reaching 35 GW of installed renewable energies.

Similarly, Iberdrola is planning to invest €155 bn during the next ten years, with the goal of achieving zero emissions in 2030, 20 years ahead of the goal set for the EU.

The Iberdrola business model, which has increased six-fold, shows that the fight against climate change is entirely compatible with value creation for its shareholders, employees and society at large. The company is currently the world leader in renewable energies, supplying energy to more than 100 million people around the world.

However, according to the chairman, the decarbonisation undertakings that will emerge from the COP26 will only be viable if governments provide a stable, coherent and predictable regulatory framework with legal security. The objective is that clean energy development is not affected by temporary problems of the type currently occurring with rising gas prices, which is causing some companies to lose their way and go back to coal.

In his opinion, other measures should be added to these stable rules, such as the immediate suspension of fossil fuel subsidies, or providing price signals under the "polluter pays" principle, but above all, Sánchez Galán insisted on the need to put an end to the bureaucracy that prevents green projects from being approved quickly.

Iberdrola is making progress with its national decarbonisation strategy in line with a green transformation plan linked to the orderly closure of its power plants, such as those in Velilla (Palencia) and Lada (Asturias).

These plants include investments in renewables, the creation of citizen platforms, circular economy projects and stimulation of business and local jobs using green principles, innovation and support for local entrepreneurship.