At the tender age of 18, she upped sticks and went to the United States to combine her Aerospace Engineering degree with a professional sporting career. Now she is the first female Spanish footballer to be selected for the soccer DRAFT in the United States, allowing her to play in the highest category whilst taking part in her second World Cup with the Spanish team. 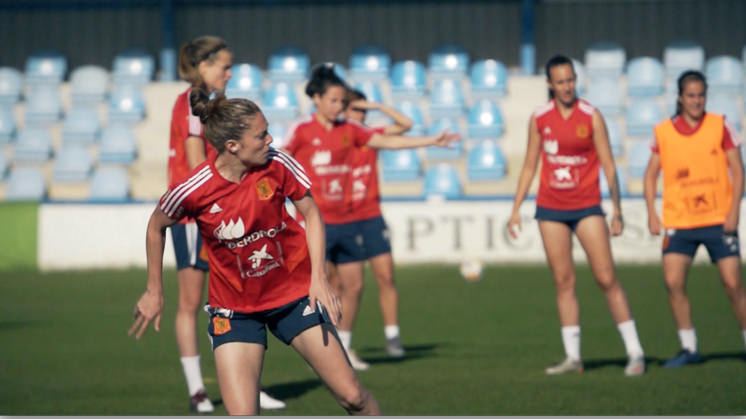 Celia Jiménez is the first female Spanish footballer to be selected for the soccer DRAFT in USA.

Celia Jiménez, US National Women's Soccer League (NWSL) and Spanish national team player: "At the time I still wasn't sure whether I'd continue with my football career or do a master's degree at university... I was a little nervous watching the ceremony live..."

Celia Jiménez: "...while looking at master's degrees on the university website at the same time. When I saw it was American after American after American, I thought to myself: 'Maybe it's not going to work out, maybe it's just not meant to be'. All of a sudden, they said my name, pretty badly at that. They said, 'Silia Yimenes Delgato'."

Laura Jiménez, Celia's sister: "Celia rang home. She wasn't expecting it and we couldn't believe it. At last! It's really happened, it's true!"

Celia Jiménez: "It was incredible, a dream come true. Since the day I set foot in the US I'd really wanted to play in the national league, to have the opportunity to see what it's like to play with some of the best footballers in the world and in such a competitive football league."

Laura Jiménez: "She's had big dreams since she was a little girl. I always remember Celia with a football, meeting up with friends in the afternoon to play, training at home after football practice..."

Celia Jiménez: "Being the first Spanish female player selected for the DRAFT is very special. But I also think it is a big responsibility. For the US league to recognise the work you've put in for so many years, and give you the opportunity to carry on doing it at the highest standard, it's a dream come true."

"I made the decision to go to the United States because I was not willing to give up football or going to university."

Spain women's national football team manager, Jorge Vilda: "If university sport were really strong in Spain it would mean the talent would stay here — it would stop Spanish footballers from going to the United States to continue their careers."

Celia Jiménez: "The American system is designed to give athletes the opportunity to study to a very high level."

Laura Jiménez: "They are really committed to young promises and to a culture of hard work."

"We went to visit Celia in Alabama and you're walking down the street and you suddenly see lampposts with huge posters with your sister on them, and you say, 'Wow! This is really different to what's going on in Spain nowadays'".

Jorge Vilda: "We're extremely proud to see her play with us in the national squad and in a professional league like the US National Women's Soccer League."

Celia Jiménez: "It's hard to adapt when I'm playing with the national team. The journeys last a whole day, you arrive with jet-lag... On the other hand, in the US I'm growing so much as a player, I think it's shown me a totally different football philosophy."

Jorge Vilda: "We follow Celia's progress very closely. Not just the matches she plays, but her relationship with her trainer, her technical director, who keep us up-to-date on how her training's going and her progress."

Celia Jiménez: "I remember the first time Jorge called me. It's possibly one of the most special moments of my life. I was 14 years old and it was the first year I played in the first division, for Real Jaen. I didn't expect it at all. Since then, every time I put my boots on, I think of that shield and the excitement of coming back and getting better every day."

Jorge Vilda: "I always tell her she's going to get every single thing she follows. So right now, it's a question of seeing a promising young girl reach fulfilment."