"My life revolves around football: I was born for it"

Amanda Sampedro has won three leagues and one Copa de la Reina with Atlético de Madrid Féminas, where she always dreamt of playing. She made her first-team debut at the age of 15, becoming captain three years later and has been the most regular player on several occasions. She is also one of the captains of the national squad, which she joined in 2013, and a great ambassador for women's football. 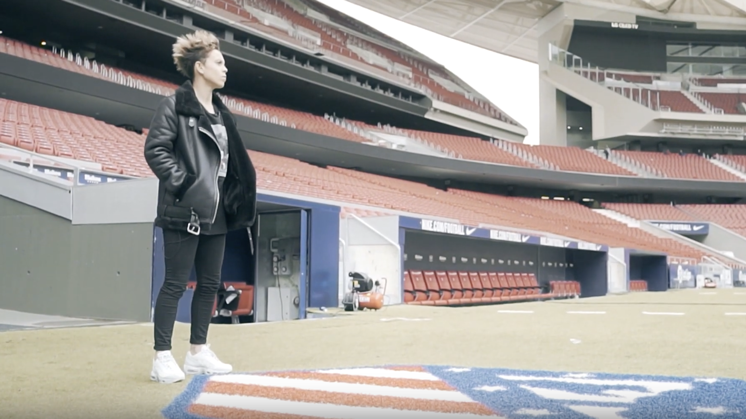 Amanda Sampedro at the Wanda Metropolitano, where her team attracted 60,739 spectators, a world record for a women's football club match.

AMANDA SAMPEDRO TELLS US ABOUT HER DREAM

Amanda Sampedro, captain of the Atlético de Madrid Women's Team: "What I have experienced and how I really started. You bought me my first football boots at the flea market."

Maricarmen Bustos, Amanda Sampedro's mother: "Yes, at the flea market. I bought them for you."

Amanda Sampedro: "You could have bought them at a sports shop."

Maricarmen Bustos: "No way! I thought: 'Why bother? So you can play twice and get bored?'"

Pedro Sampedro, Amanda Sampedro's father: "You were just a little girl. You must have been five or six years old. We went to see an Atlético de Madrid match and you loved it. At that time I saw it like a dream, I thought: 'If only I could watch her play here at Vicente Calderón someday, although that day will never come'. We didn't think it would happen, because we didn't think that women's football would come as far as it has. But it has, we just had to wait."

Maricarmen Bustos: "Do you remember when you used to go down to the platform to watch the boys, the neighbours, play football, and they wouldn't let you join in? You used to stand there watching."

Amanda Sampedro: "When I asked them if I could play, they'd laugh and say: 'What's she on about?' And when I started joining in because I didn't care and they saw I could play, they started letting me. And from then on, whenever I went down to play, I stayed. And you used to call me from the terrace and say: 'Dinner's ready'. And I'd go up."

"My life revolves around football. Not just because it's my life, but because I love it. I was born to play it."

Pedro Sampedro: "When we started playing in the regional first division, we would go to the football grounds with Amanda and people looked at us in astonishment. They used to say: 'Look! There's a girl playing in the Mar Abierto team! And they respected us, because they would watch her and remark: 'Careful with that girl, if you take your eye off her she'll knock one in'."

Maricarmen Bustos: "Who would have said your photo would be up there?"

Amanda Sampedro: "The truth is that it made me happy when they showed me that picture in the club. It was an unforgettable moment. And what's more, it's been put up as evidence and proof in an important part of the stadium, alongside players like Fernando Torres, Luis Aragonés and Antoine Griezmann, for me it's a dream come true".

Maricarmen Bustos: "When you won the Copa de la Reina, who would have thought it was Atlético's first cup and it would be followed by two consecutive Liga cups?"

Amanda Sampedro: "When I was first promoted to the first team at the age of 15, they were all 30-year-old women."

Maricarmen Bustos: "You used to cry. You've obviously come this far because of hard work, loyalty, and honesty. It isn't easy, you have to work very hard".

Amanda Sampedro: "There are bad times to deal with, it's not all plain sailing. Then, when the good times come, when you win a league or play the match of your life, it's just 20 minutes. The next day you're back working again, because the next step is coming and nobody remembers the last match."