THE USE OF RECYCLED PLASTIC INTO CIVIL ENGINEERING PROJECTS

Plastic is environmentally harmful because it does not degrade: did you know that plastic bottles can take more than five centuries to break down? But, what if bottles and other plastic waste could be transformed to our advantage? Armed with this challenge, researchers from Rutgers University in the United States have created a 100% recycled and recyclable thermoplastic material which is now being used in construction. This led to the creation of the world's longest recycled plastic bridge located in the Scottish county of Peeblesshire. 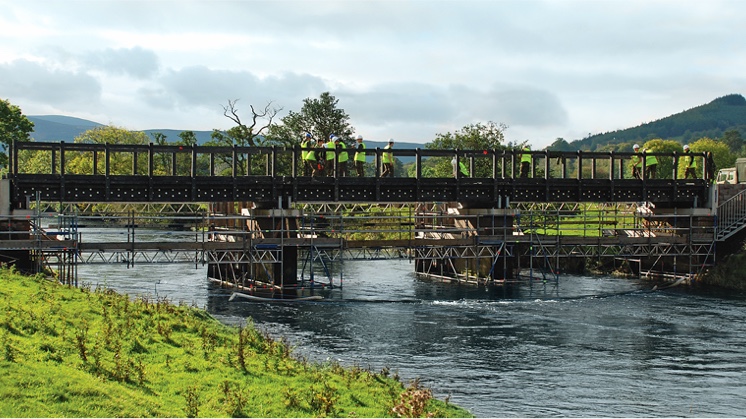 The River Tweed, which runs through the Scottish Borders, is perhaps most famous for the cloth that bares its name. The river also acts as an environmental protection pioneer as its waters flow beneath the Easter Dawyck Bridge, the longest in the world built using recycled plastic. The bridge was built by recycling 50 tonnes of waste and can bare the weight of vehicles of up to 44 tonnes and is 100% recyclable.

The bridge —the appearance of which is the same as those traditionally built in the area— was assembled by a local, Peeblesshire-based contractor in record time: two weeks for the columns and just four days for the girders. A total of three spans, each nine metres in length, combine to create a 30-metre (90 feet) long structure built using a material that is both light and extremely stable which does not corrode, does not rust, does not require painting nor any form of treatment of maintenance.

That a bridge of such innovative characteristics can be found in the middle of the Scottish countryside, close to the small town of Peebles (just under 9,000 inhabitants according to the most recent census), is the result of the work of two main players. Firstly, the Advanced Materials Center of Rutgers University in the USA and secondly, two companies, one from either side of the Atlantic, who decided to incorporate the use of recycled plastic into civil engineering projects. 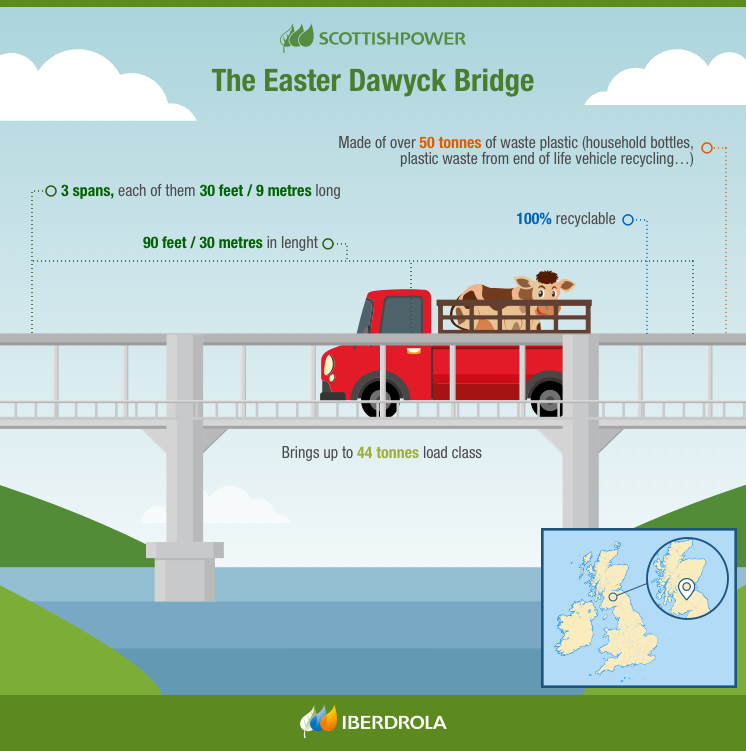 The Easter Dawyck Bridge Project, designed and developed by Vertech Ltd with the support of the Welsh Regional Government, was made possible thanks to a partnership arrangement between the Engineering School of Cardiff University and Rutgers University, the latter of which developed the thermoplastic material known as structural plastic lumber.

This material is the result of the work done by the team headed up by Professor Thomas Nosker, chief researcher of the Advanced Materials Center of the aforementioned US university, who saw the possibility of transforming the disadvantages of plastic into something with tremendously positive characteristics when used in the building of structures. With all of the above being based on one premise: that the material would always be recycled.

In the beginning, the research carried out by Professor Nosker's team centred on the use of recycled high-density polyethylene, which is a key material in the manufacture of packaging, to replace the treated wood used in the construction of small items such as garden benches. However, the main problem was that the recycled polyethylene planks were not strong enough and broke with repetitive and prolonged use. It was the idea of combining that material with polystyrene —the type used in fast food takeaway boxes— and other more rigid plastics in exactly the right proportion that proved to be a major breakthrough: the result is a material whose strength makes it perfect for structural buildings. Longer lasting than wood, it requires no maintenance whatsoever and can be used for so much more than the construction of park benches. Importantly, it is totally recycled and recyclable. 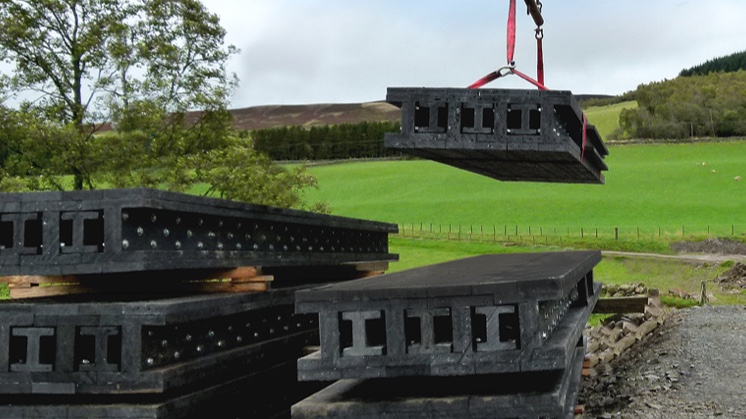 The component parts are manufactured with the specified measurements and are totally recyclable. Photo: Sicut / Vertech LTD. 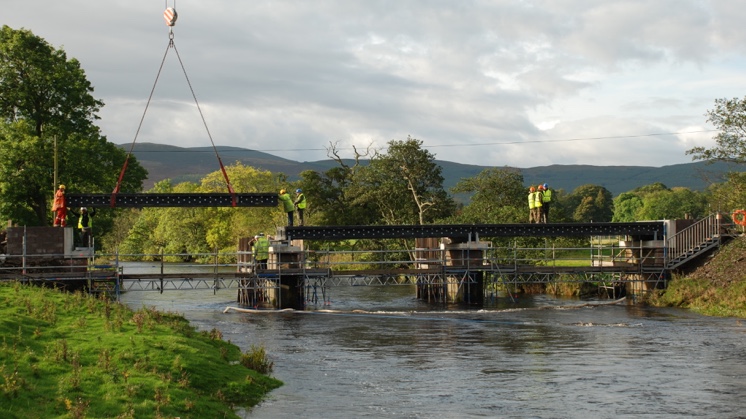 The Easter Dawyck Bridge has three spans, each of which is 9 metres long. Photo: Sicut / Vertech LTD. 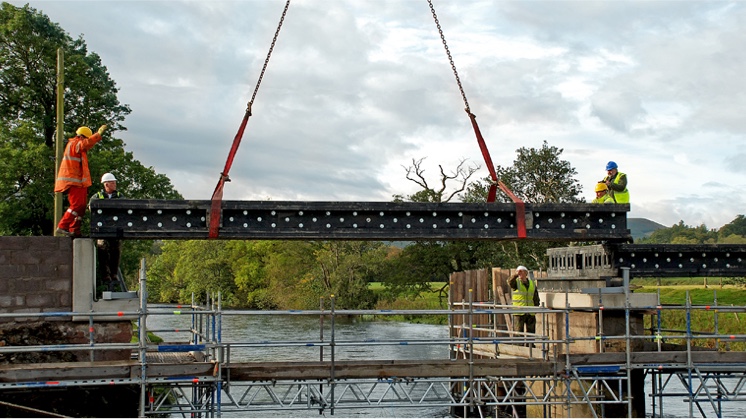 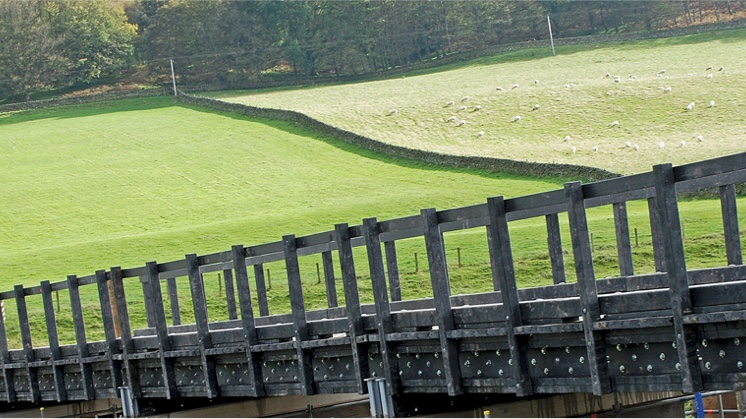 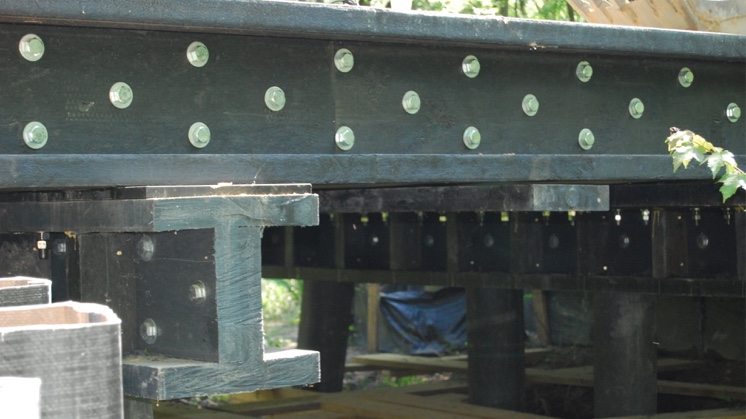 Construction times are kept to a minimum thanks to the prefabrication of standardised component parts. Photo: Sicut / Vertech LTD. 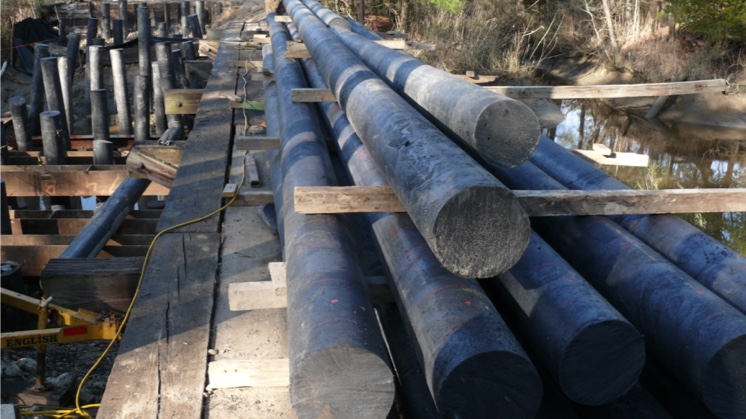 The material resulting from that combination is tremendously pliable when hot, meaning that it can take on any shape and that the possibilities are endless with respect to its use in civil engineering projects: railway sleepers, bridge structures, girders and columns for a whole host of uses. In the United States the partnership between Professor Nosker and the private company has resulted in a series of patents that marry the use of the material up with standard technical specifications. In turn, this translates into a significant reduction in the costs of the structure due to the component parts being manufactured in the required lengths and thicknesses before being assemble on-site.

Before being brought over to Europe, the structural plastic lumber and this efficient building technique had already been used in the construction of four bridges in the USA. However, these are shorter than their Peeblesshire counterpart, which represents a civil engineering milestone and combines all the beneficial characteristics involved in the use of this sustainable material.

The environmental benefits are obvious: its manufacture enables the recycling of tonnes of plastic which would otherwise be buried in landfill or end up being dumped.

The United Kingdom, just like the rest of the world, is facing up to the battle against plastic. Initiatives such as the use of sustainable materials in the building of structures are just one example of this fight. The Scottish Government led the way in the prohibition of single-use plastics, such as drinking straws, which will be banned by end of 2019. Scotland was also the first to charge for plastic bags in supermarkets, and their recycling rate is among the highest in Europe. Legislation changes are also underway with respect to civil engineering structures such as bridges —the Easter Dawyck Bridge is built on private land, which made its construction using this innovative material possible— or railway lines, meaning that the use of sustainable materials might well also be allowed.

The use of plastics in Scotland.