Discover the most sustainable cities in the world

The world's population has risen to 7.6 billion (UN, 2017), and a large part is concentrated in major cities. These cities contribute the most to greenhouse gas (GHG) emissions, and yet, at the same time, they offer the best hope for reducing the ecological footprint on a global scale.

Discover the most sustainable cities in the world

The world's population has risen to 7.6 billion (UN, 2017), and a large part is concentrated in major cities. These cities contribute the most to greenhouse gas emissions (GHG), and yet, at the same time, they offer the best hope for reducing the ecological footprint on a global scale.

The world has experienced unprecedented urban growth in recent decades. In 2015, nearly 4 billion people (54% of the world's population) lived in cities, and, according to projections, that number will increase to approximately 5 billion by 2030.

This rapid urbanisation brings with it implicit numerous difficulties such as the growing development of slums, the inadequacy of basic services and infrastructure as well as uncontrolled urban growth, all of which increase the vulnerability of cities to natural disasters. It has also been shown that they are (very active) participants in the escalation of air pollution: According to the latest report Cities and Climate Change, urban settlements are responsible for up to 70% of greenhouse gases while only occupying 2% of the world's territory.

It is therefore necessary to improve urban planning and management in order to make these spaces more inclusive, safe, resilient, and sustainable, as was stated in Objective 11 of the Sustainable Development Goals approved by the UN in 2015.

Cities play a fundamental role in the fight against climate change: They are able to lead the energy transition towards low carbon development based on efficiency and renewable energy.

A sustainable city is one that has been able to introduce greenery into the urban environment to reduce CO2 emissions and improve the quality of its air, has promoted renewable energies to conserve and protect natural resources, has successfully implemented sustainable mobility and the use of public transport, and is committed to a circular economy.

The Sustainable Cities Index [PDF], developed by ARCADIS in collaboration with the United Nations Human Settlements Programme (UN-HABITAT), is an annual report that is supported by the study of the three pillars of sustainability, whose objective is to develop a rating system for the 100 most sustainable cities in the world. These pillars are: 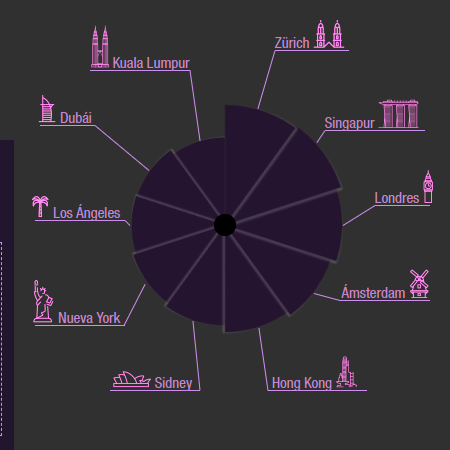 Kuala Lumpur
The index explores the tree demands of
People, Planet and Profit to develop a sustainability ranking of 100 of the world's leading cities.

Singapore is the most sustainable city in Asia according to the 'Sustainable Cities Index 2016'.

Zurich leads the Sustainable Cities Index 2016. Its strong commitment to urban ecology is an additional boost to its already-solid reputation as a liveable city. One of its main initiatives is to become a 2,000-watt society per capita by 2050 — 2,000 watts is the amount established as sustainable energy use —. To achieve this goal, efforts will focus on energy efficiency issues, bioclimatic architecture, electric mobility, and on the awareness of its inhabitants.

Singapore is the most sustainable city in Asia and the second in the world overall. It is estimated that the city's population will exceed 6 million inhabitants in 2030; therefore, the government has focused on improving mobility and connectivity within the city. Furthermore, the city has set the ambitious goal of making at least 80% of its buildings 'green' by that date.

Stockholm, the largest city in Sweden, ranks third in the Sustainable Cities Index 2016. The city obtained a high score in environment and quality of life thanks to the implementation of numerous initiatives to reduce CO2 emissions. Without a doubt, the city has excelled in the development of the Hammarby Sjöstad area, which has gone from an industrial zone to an ecological neighbourhood thanks to the construction of a sustainable water, energy, and waste management system.

The European Commission created the European Green Capital Award in 2010 to recognise the important role of different sities and local authorities in the protection of the environment, as well as their high degree of commitment to sustainable progress.

Do you know what the European Green Capital is?

To recognize the important role played by cities and local authorities in the protection of the environment, as well as their high degree of commitment to sustainable progress, the European Commission grants the title of European Green Capital. We present the cities that have obtained this distinction since its creation in 2010 to the present: