WHAT IS THE CIRCULAR ECONOMY

The circular economy, a new model for sustainable production and consumptio

The circular economy entails a radical change in perspective by people and companies when it comes to dealing with the lack of resources, environmental impact, value creation, and employment 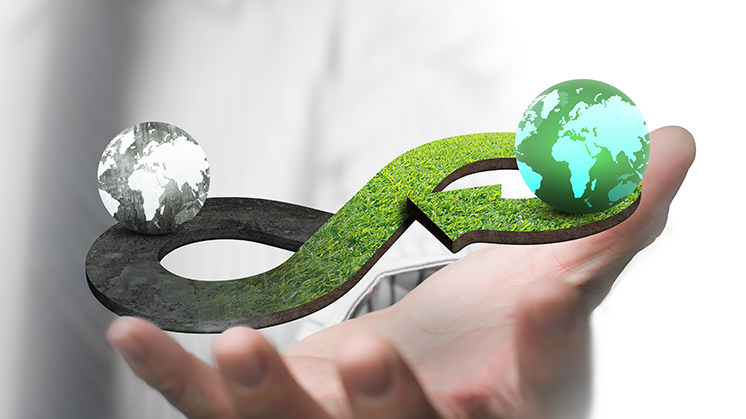 The generation of waste as a result of economic activity and consumption generated in homes is one of the biggest problems facing the planet. According to a report by the World Bank External link, opens in new window., in the OECD countries alone, which is where consumer society plays a key role, 572 million tonnes of rubbish are produced per year, making up 44% of the total global generation. Although these figures are huge, they pale in comparison to the planetary scale: throughout the world, more than 3.5 million tonnes of waste are accounted for per day and over the year, this amount rises to about 1.3 billion tonnes.

WHAT IS THE CIRCULAR ECONOMY

The circular economy takes production processes into consideration and outlines how to reuse, repair, and recycle items, thus increasing sustainable manufacturing and consumption. This way, in addition to reducing waste, saves energy and helps avoid irreversible damage caused in terms of climate and biodiversity, as well as in terms of air, soil, and water pollution, owing to the use of resources at a rate that exceeds the Earth's capacity to renew them.

In order to mitigate the possible environmental consequences, it is necessary to minimise the generation of waste and encourage the use of products, materials, and resources that will remain in the economy for as long as possible. These are the foundations of the so-called circular economy which seeks a new model of production and consumption of goods and services associated with sustainability.

Society as a whole can and must help the circular economy become a widespread reality. For example, the UN has established the Sustainable Development Goals to ensure sustainable consumption and production patterns (Goal 12). These 17 goals are ambitious and universal, set forth as a call to action, so the main environmental, social and economic challenges the planet is facing can be addressed. Putting into practice the expression 'nothing is lost, everything is transformed' is a good way of doing our part.

PHASES OR STAGES OF THE CIRCULAR ECONOMY

ADVANTAGES OF THE CIRCULAR ECONOMY

A Europe that uses resources effectively is an initiative that forms part of the Europe 2020 strategy, which aims to generate smart, sustainable, and inclusive growth. With the backing of the European Parliament and the European Council, this is currently the main European strategy for generating growth and employment. Its main objectives are: