Bioeconomy what is it? | Key to sustainable development

Bioeconomy: the challenges of a key model for sustainable development

In a world threatened by climate change, the drive towards a more environmentally friendly economy is not an option, it is an obligation. To achieve such sustainable development, the bioeconomy, which the FAO defines as "knowledge-based production and the use of biological resources, processes and methods to provide goods and services in a sustainable manner in all economic sectors", becomes essential. 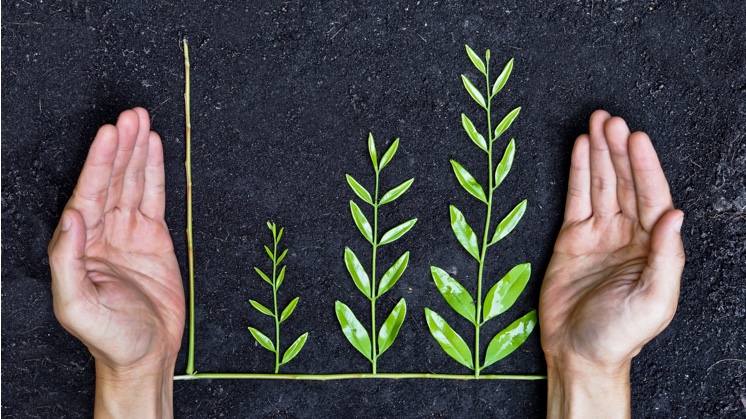 The bioeconomy proposes a sustainable and circular model that is key in the fight against climate change.

Human activity has clearly modified the climate over the last century. For example, the increase in greenhouse gas (GHG) emissions has triggered an increase in the Earth's average temperature. In addition to the direct consequences on the environment and humans, climate change affects the economy as a whole.

The climate change impact over food security, human health, migratory flows, biodiversity loss and rising sea levels, among other aspects, will lead to a decline in productivity and wealth creation, especially in less-developed countries. In this context, the bioeconomy will play a key role in the fight against climate change.

WHAT IS THE BIOECONOMY

According to the United Nations Food and Agriculture Organisation (FAO), the bioeconomy is "the production, use and conservation of biological resources, including related knowledge, science, technology, and innovation to provide information, products, processes and services to all economic sectors with the aim of moving towards a sustainable economy".

The term bioeconomy became popular in the first decade of the 21st century following its adoption by the European Union (EU) and the Organisation for Economic Co-operation and Development (OECD) as a framework for promoting the use of biotechnology to develop new products and markets. Since then, both the EU and the OECD have implemented specific bioeconomy policies.

For example, the EU Bioeconomy Strategy covers all the sectors and systems that depend on biological resources: animals, plants, micro-organisms and derived biomass, including organic waste. The ultimate aim is to protect the environment, avoid overexploitation of natural resources and enhance biodiversity.

The bioeconomy aims to drive both sustainable development and circularity. In particular, the principles of the circular economy — reuse, repair and recycle — are a fundamental part of the bioeconomy. Through reuse, repair and recycling, the total amount of waste and its impact is reduced. It also saves energy, minimises pollution of soil, air and water, thus helping to prevent damage to the environment, climate and biodiversity. 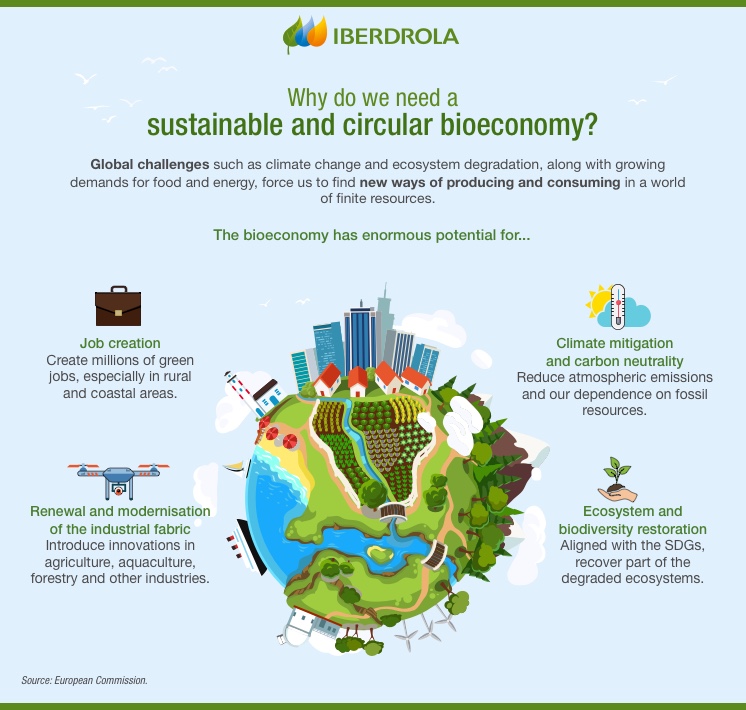 Why do we need a sustainable and circular bioeconomy?

SEE INFOGRAPHIC: Why do we need a sustainable and circular bioeconomy? [PDF] External link, opens in new window.

Food systems occupy the largest niche in the bioeconomy. To these systems, which include sustainable agriculture, sustainable fishing, forestry and aquaculture, as well as food and feed manufacturing, are added bio-based products and bioenergy. BIo-based products include bioplastics, biodegradable clothing and other products related with eco-design. Like biomass — one of the renewable energies —, bioenergy improves the security of energy supply, reduces energy dependence and creates new opportunities for growth and employment.

HOW TO BOOST THE BIOECONOMY

An appropriate bioeconomic strategy requires the development of an action plan involving local governments, national governments and supranational organisations. In order to promote such a plan, a political framework that promotes multilateralism and enables joint efforts is needed. We review the guidelines to be followed below:

The bioeconomy, the 2030 Agenda and the SDGs

The 2030 Agenda was adopted by the United Nations (UN) in 2015.This action plan encompasses the 17 Sustainable Development Goals (SDGs) and although all of these goals can benefit from the application of the bioeconomy, an FAO study [PDF] External link, opens in new window. has found four related areas:

1. The bioeconomy influences the achievement of the end of poverty, zero hunger and the reduction of inequalities.

2. The bioeconomy relates to the goals of clean water and sanitation, sustainable cities and communities and responsible consumption and production.

3. The bioeconomy drives sustainable industry and infrastructure, as well as promoting economic growth and decent work.

4. The bioeconomy promotes health and well-being and climate action, which benefits underwater life and the life of terrestrial ecosystem life.

THE ADVANTAGES OF THE BIOECONOMY

The bioeconomy provides solutions to the main challenges facing humanity today, almost all of which are linked to climate change:

Develop actions aimed at mitigating and adapting to climate change.