Iberdrola encourages its employees to donate food and essential goods. Since 2012, this has meant collecting over 20,400 kilograms of food, as well as carrying out volunteering initiatives such as supporting soup kitchens to feed families in need. Under our commitment to mitigate the COVID-19 health crisis, 90,000 meals have been prepared for people in vulnerable situations. 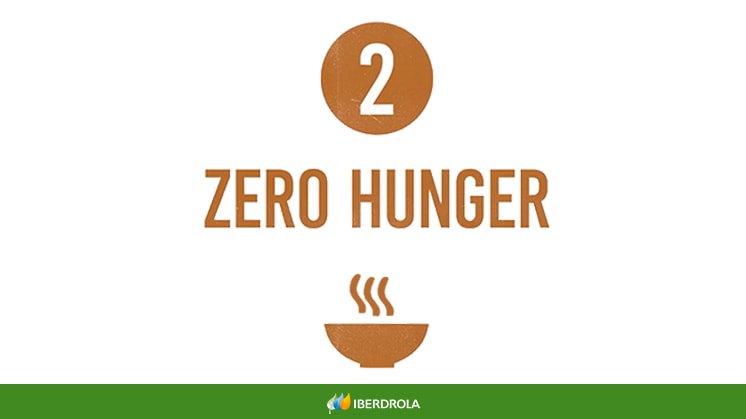 OUR CONTRIBUTION TO SDG 2: ZERO HUNGER

As a goal for 2020, Iberdrola group set itself the task of gathering essential goods donated by employees to help ease the situation of social exclusion and poverty which so many people are living in. Actions and achievements include:

To help alleviate the economic crisis, the company has launched food collection and donation campaigns in Spain, the United Kingdom, the United States, Brazil and Mexico. Operation Kilo has adapted to a new format in which employee donations have been transformed into food products for vulnerable families.

As part of Iberdrola's commitment to mitigate the consequences of the coronavirus crisis, 90,000 charity meals have been prepared for people who are short of resources in the areas of Madrid and Biscay.

In Mexico, the company has delivered more than 10,000 food parcels to the most vulnerable communities affected by the pandemic.

Corporate volunteering
Together we build the world we want!
Access

SDG 2 aims to end world hunger. It focuses on ensuring that all people, especially the poorest and most vulnerable — which includes lactating mothers — have access to safe, nutritious and sufficient food, ending all forms of malnutrition.

WHY IS IT SO IMPORTANT TO ACHIEVE SDG 2: ZERO HUNGER?

Undernourishment and hunger make people less productive and more likely to suffer disease. This prevents them from raising their income and improving their standard of living.

The food and farming industries are vital in eliminating hunger and poverty. Under good, responsible management they could feed the entire planet and generate income, foster development among the rural population and protect our environment.

However, according to the United Nations (UN), one third of the food we produce worldwide goes to waste. That means approximately 1.3 billion tonnes of food gets thrown away every year. The latest report by the FAO estimates that in 2019 almost 690 million people went hungry around the world (nearly 60 million more than in 2014), with 135 million people from 55 countries and territories suffering acute food insecurity. In the 55 countries undergoing a food crisis, 75 million children suffered stunted growth and 17 million were emaciated (the worst level of acute food insecurity) in 2019.

Chronic malnutrition or stunted growth increase the risk of children dying from common infections and are also associated with deficient cognitive development.

Malnutrition is concentrated in Asia and Africa, with countries such as Ethiopia and Kenya having declared famine in 2017. But hunger also troubles many areas in Latin America and the Caribbean, where food insecurity continues to rise.

It is estimated that by 2050 there will be 2 billion more people on the planet, but we will have 25 % less land on which to grow crops. This calls for sustainable food production systems and resilient agricultural practice to end hunger and achieve food safety, better nutrition and more sustainable farming.

Ending hunger and achieving food security has become a major challenge due to climate shocks and plagues of locusts, now causing a crisis in 23 countries, especially in and around eastern Africa. These insects are ravishing crops and devastating farms and are able to devour vast amounts of plants and vegetables. As if all this were not enough, the COVID-19 health crisis has joined them to make matters worse. The situation we were seeing prior to the pandemic will worsen due to the economic slowdown and the effects of the recession.

If small food producers were already at a huge disadvantage, the pandemic has pushed many over the edge. Although their role in global food production is crucial, data show that their productivity is systematically lower than large-scale producers, with their income averaging less than half that of major producers in most countries.

Another consequence of COVID-19 are the blocking measures being put in place to contain the spread of the virus, which has forced local businesses and markets to close. Small producers have largely found themselves unable to get their products to customers.

In this situation, ending hunger has become SDG 2 of the UN's 17 Sustainable Development Goals, approved in September 2015 as part of the 2030 Agenda.

Iberdrola aligned with the sdg

WHO DOES IT AFFECT?

under the age of 5 and they are not as tall as they should be for their age because of chronic malnutrition.

How is it distributed around the world?

They are all in Africa, where two out of every 10 inhabitants are undernourished (chronic hunger)

Lack of food production systems and sustainable agriculture, shortage of aid for the sector, food waste and high level of vulnerability of certain populations to natural disasters and war.

Is there a solution?

The number of people around the world who suffer hunger is still rising. The upward trend that began in 2014 continued through to 2019. Since then, there have been almost 60 million more malnourished people. Conflicts and climate events could explain these drastic figures. It seems unlikely that the major goal for 2030 will be achieved, especially as we now face the COVID-19 crisis.

The specific targets set for 2030 are: