Why is Biodiversity lost and how to solve it?

Biodiversity loss, a risk for the environment and for humanity

The planet's biodiversity is under threat and the main culprit is the one who, paradoxically, depend on it most: human being. Slowing down biodiversity loss, understood as the reduction or disappearance of the variety of living beings that inhabit the planet, is one of humanity's great challenges. Below, we review the causes, consequences and possible solutions. 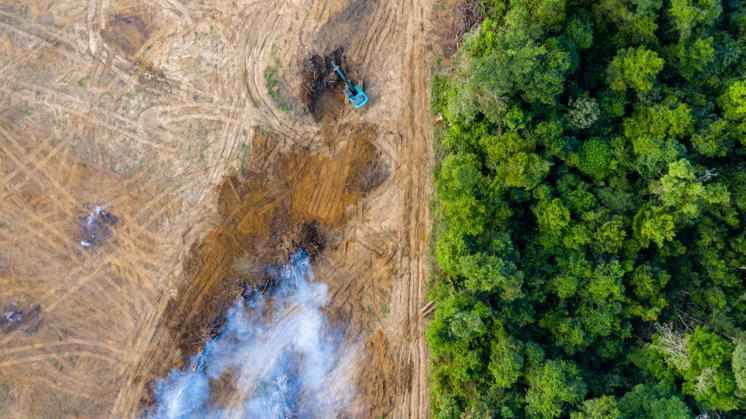 As a planet, we are failing to meet all the targets set for slowing down biodiversity destruction by 2020. This is the devastating conclusion of the fifth Global Biodiversity Outlook report

External link, opens in new window. published in September 2020 by the Intergovernmental Science-Policy Platform on Biodiversity and Ecosystem Services (IPBES). The document not only warns of the alarming degradation of nature, but points to it as a variable that increases the risk of future pandemics.

The Aichi Targets, part of the Strategic Plan for Biological Diversity (2011-2020) established by the United Nations Environment Program (UNEP), were due to be met by the year 2020. This road map set 20 targets to slow down the destruction of the planet's biodiversity, but ten years later, as the report points out, none of these commitments is likely to be fully met, with the consequent negative impact on species, ecosystems and human beings themselves.

WHAT IS BIODIVERSITY LOSS

Biodiversity loss refers to the decline or disappearance of biological diversity, understood as the variety of living things that inhabit the planet, its different levels of biological organisation and their respective genetic variability, as well as the natural patterns present in ecosystems. In mid-2019, the United Nations (UN), in collaboration with IPBES, presented an ambitious report [PDF] External link, opens in new window. on biodiversity warning that out of a total of eight million, one million species are in danger of extinction. Some researchers even dared to talk about the sixth mass extinction in the history of the planet.

Biodiversity has declined at an alarming rate in recent years, largely as a result of human activity. Let's take a look at some of the main causes:

When we talk about pollution, we may think of car exhaust fumes billowing into the atmosphere, but biodiversity is not only affected by this type, it is also affected by noise pollution and light pollution.

Soil pollution and changes in its uses due to activities such as deforestation have a negative impact on ecosystems and the species that make them up.

Invasive alien species are the second biggest cause of loss of biodiversity in the world, according to the United Nations Development Programme (UNDP). They act as predators, compete for food, hybridise with native species, introduce parasites and diseases, etc.

Overexploitation of the natural environment

The overexploitation of natural resources, that is, their consumption at a speed greater than that of their natural regeneration, has an obvious impact on the planet's flora and fauna. 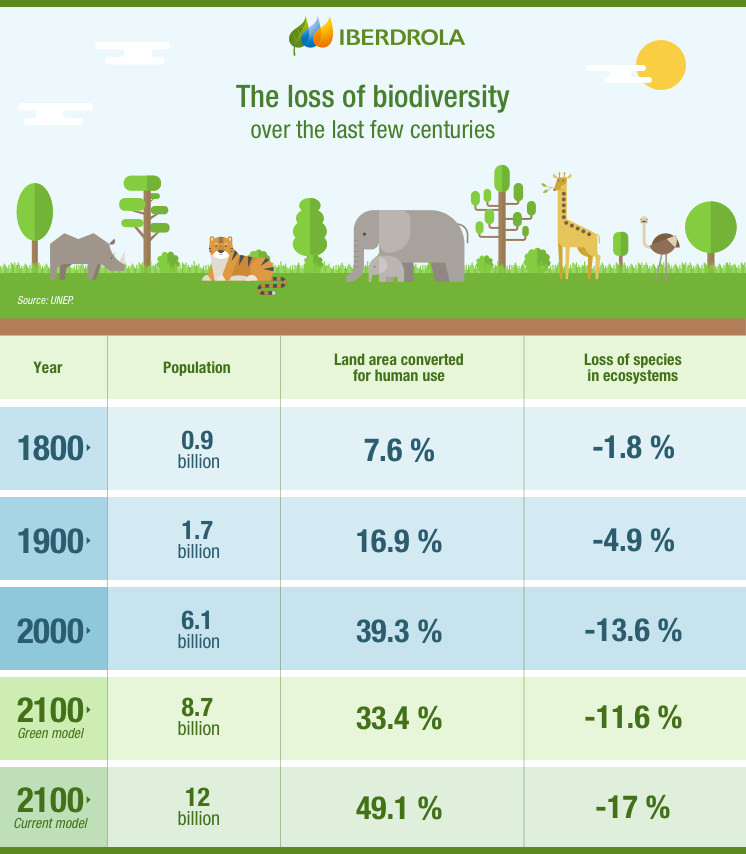 The loss of biodiversity over the last few centuries (projection of the UN Environment Program).

Biodiversity loss has many consequences, not only for the environment, but also for human beings at the economic and health level. During the presentation of the IPBES report, David Cooper, the Deputy Executive Secretary of the Convention on Biological Diversity, took the opportunity to warn about this in the midst of the COVID-19 crisis: "As we degrade ecosystems, the risk of future pandemics increases." Other adverse effects are listed below:

The alteration and destruction of habitats puts thousands of species in danger of extinction.

Biodiversity loss endangers human well-being by affecting soil and water, which are fundamental to food production.

For example, imbalances in ecosystems can lead to the emergence of pests that damage crops.

The capacity of forests and oceans to absorb CO2 decreases if their ecosystems are adversely affected.

During the presentation of the UN report in 2019, the Director-General of the United Nations Educational, Scientific and Cultural Organization (UNESCO), Audrey Azoulay, urged action with these words: "We can no longer destroy the diversity of life. It is our responsibility to future generations". Here are some of the UN's own commitments through its Sustainable Development Goals (SDGs):

Beyond UN commitments, we can all do our part to fight biodiversity loss on a personal level. How? By prioritising sustainable mobility and sustainable food, responsible consumption and recycling practices, reducing the small actions that pollute, helping to raise awareness of the smallest actions through environmental education, and ultimately supporting any action aimed at protecting biodiversity.