History of Vaccines, what was the first?

THE HISTORY OF VACCINES

The history of vaccines, crucial for combating disease

The world is waiting impatiently for the approval of a vaccine against COVID-19. While we are waiting, and to coincide with the 40th anniversary of the eradication of smallpox, let's find out a little more about the history of this medical breakthrough that has saved millions of lives since it was discovered and will continue to do so in the future. 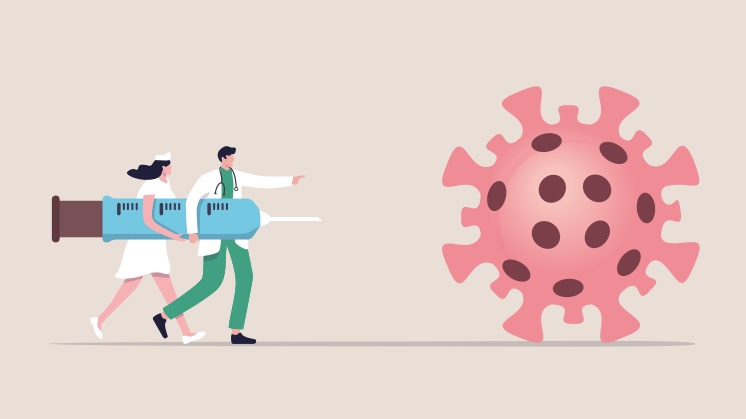 Vaccination is the most effective way of preventing thousands of cases of sickness, disability and death every year.

Herd immunity, in other words, waiting until the majority of the population has been infected with the SARS-CoV-2 virus, is not the answer. This is the verdict of over 12,000 specialists in a joint declaration

published by the Infectious Diseases Society of America (IDSA). COVID-19, the illness caused by the virus, has a mortality rate of over 2 %

, according to data from the Johns Hopkins University, and that would mean millions of deaths. So the alternative is a vaccine capable of providing immunity to the majority of the population.

Scientist have been working for years in the search for vaccines to protect us against diseases like malaria (which claims the lives of 400,000 people a year) and HIV. In fact, advances in the development of an HIV vaccine are also being used against the coronavirus

. But the population also has to assume its own responsibility, and this is the fact is that climate change and loss of biodiversity are, according to the United Nations Environment Programme (UNEP), factors that multiply the danger of there being other, new pandemics in the future. Although population lockdowns have reduced CO2 levels by 17%, we need greater commitment to reducing emissions.

DEVELOPMENT OF VACCINES AGAINST COVID-19. The WHO keeps track of the evolution of 236 vaccines under study. 196 are in Preclinical Trials (tests on cells and animals), 14 in Phase 1 (tests in dozens of people), 16 in Phase 2 (tests in hundreds of people), 10 in Phase 3 (tests in thousands of people — Pfizer, Moderna and AstraZeneca have already announced efficacy results —) and 0 Approved (vaccines ready for general use).

WHAT IS A VACCINE AND WHAT IS IT FOR

According to the World Health Organisation (WHO), a vaccine is any substance designed to create immunity against a disease by stimulating the production of antibodies. It may be, for example, a suspension of micro-organisms that are either dead or have been rendered harmless, or of products from, or derivatives of, micro-organisms. The usual method of delivering vaccines is by injection, although some are administered as a nasal spray or orally.

Vaccines are the most effective way of preventing millions of cases of sickness, disability and death. Thanks to vaccines, apart from eradicating smallpox — 2020 marked the 40th anniversary of this achievement — it has been possible to control other diseases such as rabies, cholera, tetanus, diphtheria, plague, tuberculosis, typhoid, polio, measles, mumps, rubella, meningitis, hepatitis A and B and flu. There are also vaccines against poisons, such as snake bites, and pollen and other allergens.

In recent years anti-vaccine movements have been gaining ground, driven by people who are opposed to vaccination. In 2019, coinciding with the dramatic resurgence of measles around the world — with over 140,000 deaths — the WHO described this movement as one of the ten greatest threats to world health

. With the COVID-19 pandemic, its media presence has increased, sparking demonstrations in cities all over the world.

THE ORIGIN AND HISTORY OF VACCINES

According to an educational paper

published by the College of Physicians of Philadelphia, a venerable organisation founded in 1787, vaccination originated in China using a technique called variolation. This technique, which sought to prevent smallpox, involved pulverising the scabs of a mildly-infected person, for nasal inhalation by healthy people in order to immunise them. This practice is estimated to be over 1,000 years old, but it was first documented in accounts dating from the 16th century.

The American Academy of Pediatrics considers the era of vaccines to have begun with the physician Edward Jenner. This British doctor observed that people who milked cows and contracted cowpox were protected against human smallpox. In 1796 he inoculated an eight-year-old child with fluid from cowpox pustules and when the child was subsequently injected with the human smallpox virus the child did not develop it and suffered no symptoms. In the 19th century the French physician Louis Pasteur developed the second generation of vaccines, including those against cholera and rabies, and introduced the term vaccine (from the latin vacca meaning cow) in recognition of Jenner's work with cows.

Between then and now, vaccines have allowed us to prevent dozens of infectious diseases. According to the WHO, the measles vaccine alone saved 23 million lives between 2000 and 2018, especially among children. It also points out that a suitable vaccination programme would make it possible to prevent 24 million people from descending into poverty in developing countries but, although immunisation by vaccination prevents between 2 and 3 million deaths a year, there are still almost 20 million infants in the world with no access to basic vaccinations

. Vaccines are powerful, effective and cheap weapons in the fight against sickness, death and poverty. 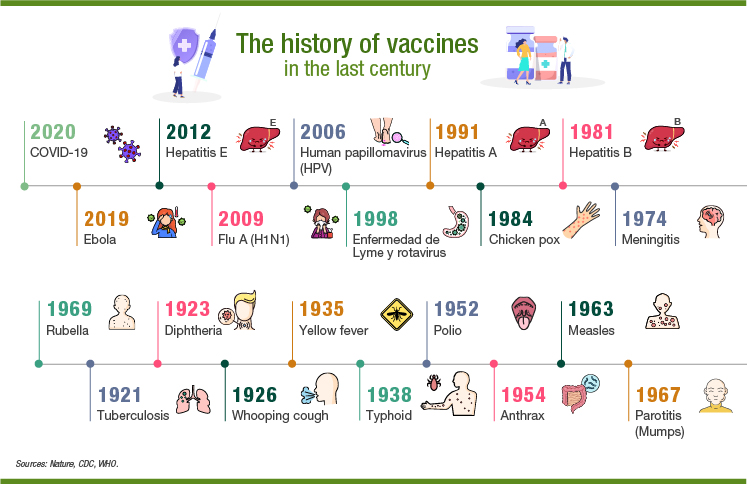 The history of vaccines in the last century.

SEE INFOGRAPHIC: The history of vaccines in the last century [PDF]

These use a weakened (or attenuated) form of the germ that causes the disease. Because these vaccines are so similar to the natural infection that they help prevent, they create a strong and long-lasting immune response. Just 1 or 2 doses of most live vaccines can give a lifetime of protection against a germ and the disease it causes. They protect against measles, mumps, rubella, smallpox, chickenpox and yellow fever.

These use the killed version of the germ that causes a disease and they usually do not provide immunity (protection) that is as strong as live vaccines. So, several doses may be necessary over time (booster shots) in order to have ongoing immunity against a disease. They protect against hepatitis A, flu (injected vaccine only), polio (injected vaccine only) and rabies.

These use specific pieces of the germ, such as its protein, sugar, or capsid (a casing around the germ), and give a very strong immune response. They can also be used on almost anyone who needs them, including people with weakened immune systems and long-term health problems. The only limitation is that booster shots are often needed. They protect against hepatitis B, HPV (Human papillomavirus), and whooping cough, among others.

These use a toxin (harmful product) made from the germ that causes the disease. They create immunity to the parts of the germ that cause the disease rather than the germ itself, so the immune response is targeted to the toxin. Booster shots may be needed to give ongoing protection. They are used to protect against diphtheria and tetanus.