Solar radiation: what it is and how it is produced

Solar radiation: what is its impact on the planet and on humans?

Solar radiation is the energy emitted by the Sun through electromagnetic waves and life on Earth depends on it. In addition to determining atmospheric and climatological dynamics and trends, it makes plant photosynthesis possible, among other processes. If you want to know more, such as what types of radiation there are and what their harmful effects on health are, especially on the skin in summer, read on. 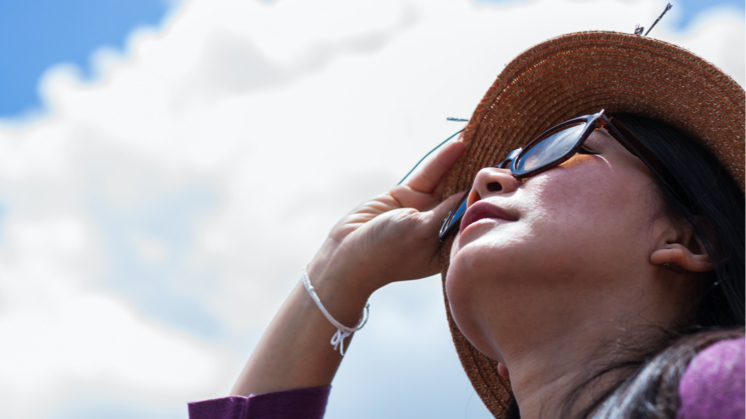 Without solar radiation, there would be no life on Earth; moreover, it currently allows us to produce photovoltaic energy, which is essential in the fight against climate change. However, it can also be harmful to human health, for example, due to its effects on our skin, and these effects have become more dangerous in recent years due to the greenhouse effect, which also influences the rising temperatures on our planet. Read on to learn about the different types of radiation and how this phenomenon is produced.

WHAT IS SOLAR RADIATION

Solar radiation is the energy emitted by the Sun, which is sent in all directions through space as electromagnetic waves. Emitted by the surface of the Sun, this energy influences atmospheric and climatological processes. It is also, directly and indirectly, responsible for common phenomena, such as plant photosynthesis, keeping the planet at a temperature compatible with life and wind formation, which is essential for generating wind power.

The Sun emits energy in the form of short-wave radiation, which is weakened in the atmosphere by the presence of clouds and absorbed by gas molecules or suspended particles. After passing through the atmosphere, solar radiation reaches the oceanic and continental land surface and is reflected or absorbed. Finally, the surface returns it to outer space in the form of long-wave radiation.

How is solar radiation measured

Solar radiation is measured on a horizontal surface by means of a radiation sensor or pyranometer, which is placed in a south-facing, shadow-free location. Data are collected in units of power, watts per square metre (W/m2), at all weather stations and tend to be taken at ten-minute or 24-hour intervals to establish averages. In the case where it is desired to convert solar radiation from power units to energy units, the data in W/m2 must be multiplied by the number of seconds comprising ten minutes (600) or 24 hours (86,400) and the result will be provided in joules per square metre (J/m2).

Depending on the form in which it reaches the Earth:

Depending on the types of light:

Humans are exposed to UV radiation, especially UVA and UVB radiation, which can be dangerous to their skin. One of the ways we have to measure the negative consequences of this type of radiation on people is the global solar UV index (UVI). This index ranges from one to eleven and the higher the index, the greater the likelihood of skin and eye damage. 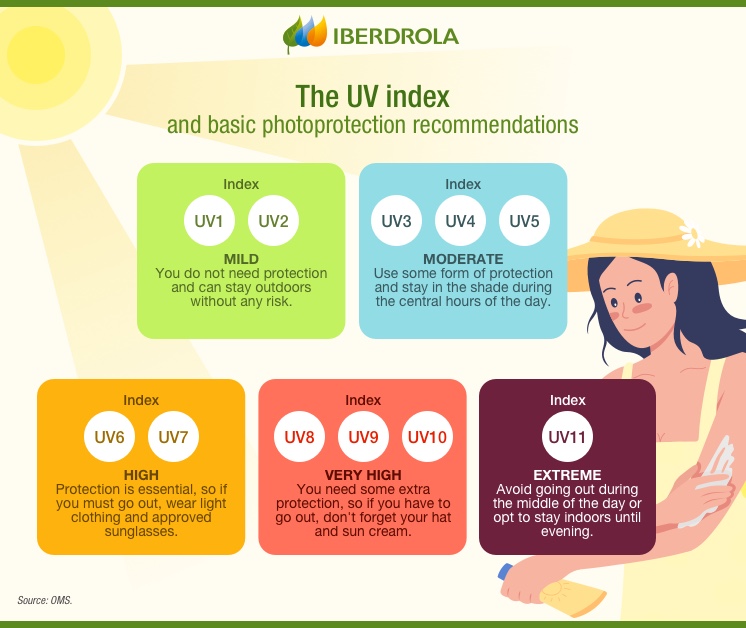 Among other consequences, it increases the chances of sunburn, premature ageing and even skin cancer, especially in people with a lighter phototype. For this reason, the IUV is an important and differential element in raising public awareness of the risks of excessive exposure, warning of the imminent need to adopt protective measures to minimise the risks. These include:

Staying out of the sun in the middle of the day and, if there is no alternative, staying in the shade and drinking plenty of water.

Wearing protective clothing, like hats, caps or carrying parasols to protect the eyes, face and neck, and light garments.

Wear good quality sunglasses, in other words those with certified lenses and, if possible, with a wraparound design and with side panels.

Use sun protection cream with a sun protection factor higher than 15, although it is advisable to choose according to the skin phototype, half an hour before exposure. Apply generously and repeat as often as necessary.