Ignacio Galán: "We are going to allocate €8,000 million to continue leading the energy transition, which will see the creation of over 20,000 jobs"

Iberdrola chairman and CEO, Ignacio Galán, took part in the opening session of the International Conference on Climate Change, Change the Change, which was held at San Sebastián (Basque Country, Spain) to discuss the challenges facing us as a society caused by the effects of climate change. 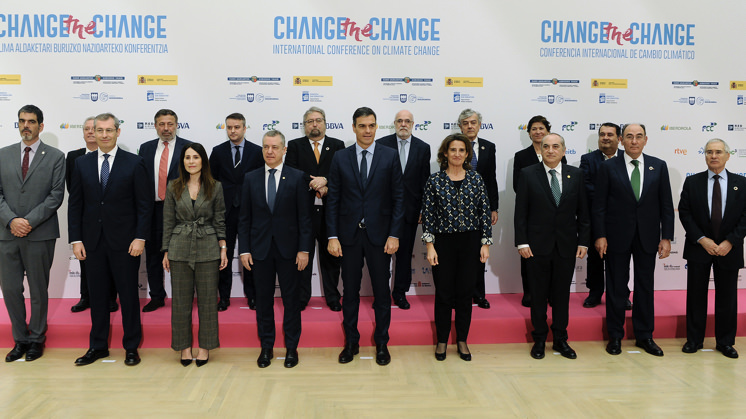 Spanish prime minister, Pedro Sánchez, opened the event, which were brought together over 600 international experts, Ignacio Galán among them.

The Iberdrola group chairman and CEO, Ignacio Galán, urged those present to "join forces” owing to the "need to bring about a change in the energy model", stressing the role the company is playing when it comes to fostering this transformation: "We are going to boost our investment in Spain, allocating €8,000 million up to 2022 to continue leading the energy transition, which will see us creating over 20,000 jobs, thus multiplying several times over those currently dedicated to traditional power generation in Spain".

External link, opens in new window., Change the Change, at which he was accompanied by the Spanish government's Minister for Environmental Transition, Teresa Ribera and the economist Nicholas Stern. The event, which was held in San Sebastián over the 6 to 8 March, were brought together over 600 international experts who expressed their commitment to the fight against climate change.

External link, opens in new window. to develop a set of renewable projects in the Basque Country, including both wind and photovoltaic energy ones. The agreement is based on the model that Iberdrola and EVE are pursuing to promote energy transition: the development of competitive, clean and sustainable energy, which reduces energy dependence, creates quality employment and serves as a social and economic driving force for the surrounding communities.

IBERDROLA IS COMMITTED TO A FAIR ENERGY TRANSITION

On Thursday, Change the Change kicked off with a session on the Sustainable Development Goals. Specifically, it explored international moves toward sustainability policies, the application of the 2030 Agenda, its implications for climate change and the challenges that lie ahead. Later, experts like Gonzalo Sáenz de Miera, Iberdrola's climate change director, explored the facets of a fair energy transition, which include aspects such as the electricity system reform, environmental tax and clean mobility.