The business of waste treatment

Garbage, a double-edged business in the Third World

Each person generates 0.74 kilos of waste per day. And in the coming years this figure is expected to increase. The old paradigm of producing, using and throwing away is flooding the world with rubbish. Solutions such as reuse, recycling and energy recovery are more important than ever. Electronic waste has become big business in the very place where waste generates the most damage, the Third World. 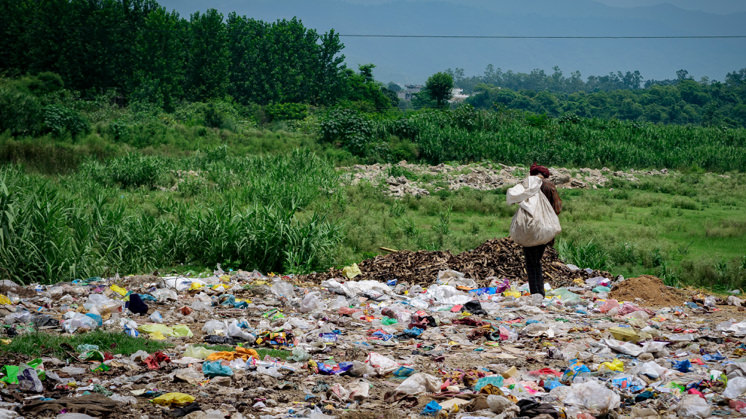 In the Third World, the lack of modern waste management systems causes the accumulation of waste.

The facts do not lie: worldwide, each person generates 0.74 kilos of waste per day. Similarly, 2.01 billion tonnes of municipal solid waste are generated worldwide each year, 33% of which is not managed in an ecologically safe manner. And this figure is expected to increase to 3.4 billion tonnes by 2050.

These are only some of the facts contained in the study What a waste 2.0: A Global Snapshot of Solid Waste Management to 2050, the latest report from the World Bank on the subject. 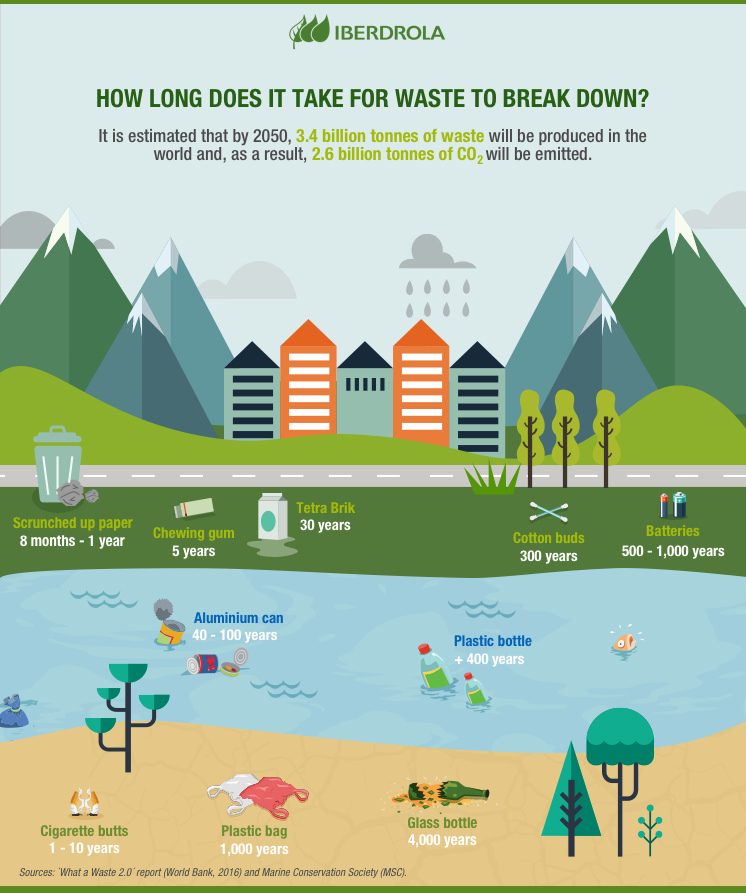 How long does it take for waste to break down?

SEE INFOGRAPHIC: How long does it take for waste to break down? [PDF]

Even though they produce the least waste, the lack of development and the political instability in the Third World have hindered the implementation of modern waste management systems in many areas. According to the World Bank, while high- and upper-middle-income countries normally provide universal waste collection services, low-income countries only collected 48% of waste generated in cities and 26% outside urban areas in 2016. This situation creates unhealthy living conditions, favours the transmission of disease and even causes some people to lose their homes or even their lives in rubbish avalanches. 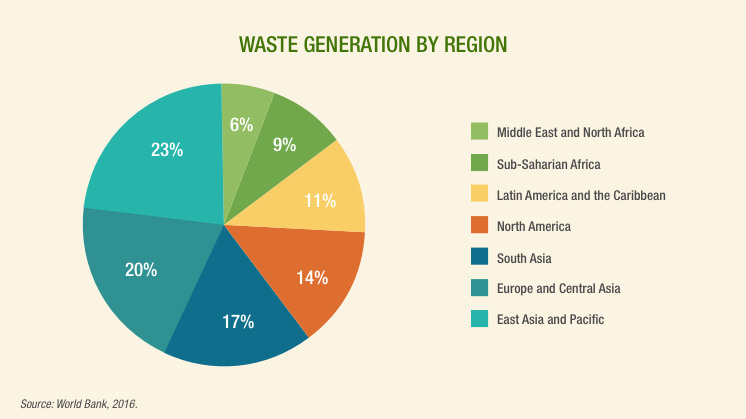 Waste generation by region in 2016.

This proliferation of waste is a consequence of the old paradigm of the linear economy: produce, use and throw away. Today, the circular economy — reduce, reuse and recycle — is seen as the only solution for living in sustainable, healthy and inclusive environments. And, in this sense, there is still a long way to go. Globally, only 13.5% of waste is recovered through recycling and 5.5% through composting. High income countries recover the most waste (29% through recycling and 6% through composting) and low income countries treat the least waste: they are only able to recover 4% between recycling and composting.

RUBBISH IN THE THIRD WORLD

The Third World is a unique case because although its lack of development means its produces less waste, this same factor turns some of these countries into large importers of waste. Ghana is a clear example.

While the Basel Convention prohibits the export of hazardous waste to the Third World, for decades, Ghana has been importing much of the developed countries' electronic waste to reuse its parts and components — computers and mobile phones contain gold, silver and copper —. The result is huge landfill sites where work is carried out in unsafe, unhealthy and environmentally damaging conditions. A UN study (2016) has certified that in Agbogbloshie the concentration of lead in the soil is 1,000 times the maximum tolerance level, and another study by the same agency concluded that in a school near one of these landfills, contamination by lead, cadmium and other pollutants exceeded 50 times the risk-free levels. 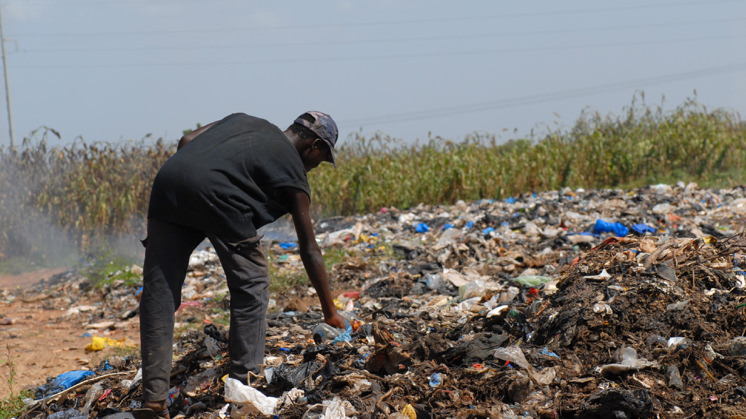 Some undeveloped countries have become in high importers of waste.

At the same time, other sources call these warnings regarding the situation alarmist and emphasise the advantages of importing these types of waste. A study by the United Nations Environment Program (UNEP) concluded that Ghana imported 215,000 tonnes of e-waste in 2009. The 15% that could not be repaired went to landfills and the remaining 85% went to workshops and resale shops, giving part of the population access to information technology and also boosting the circular economy.

China is a very similar case. It started to import waste from the West three decades ago. In 2016 alone it received 7.35 million tonnes of plastic waste and scrap, approximately 56% of the world total. However, prolonging the life of electronic equipment through recycling helps to reduce the CO2 emissions generated in its manufacture, as well as the demand for cobalt and other materials whose extraction is harmful to human health and the environment. However, the Asian giant has passed a law that significantly restricts the import of waste.

Energy recovery consists of subjecting waste to a combustion process to reduce its volume and take advantage of the energy generated in this process, whether in the form of steam, electricity or hot water.

The energy recovery rate in Spain is around 14%. This figure is well below the European average (27%) and is insufficient to comply with the hierarchical management proposed by the European Union, as stated in the European circular economy package, where energy recovery should be positioned ahead of landfill, the latter being the least desirable option.

The situation is very different in northern Europe, where five countries (Sweden, Belgium, Denmark, the Netherlands and Germany) have a waste disposal rate of only 1% and two others (Austria and Finland) have a disposal rate of 3%. This is possible thanks to their high recycling and composting rates, ranging from 42% in Finland to 66% in Germany, and energy recovery rates, from 32% in Germany to 55% in Finland. 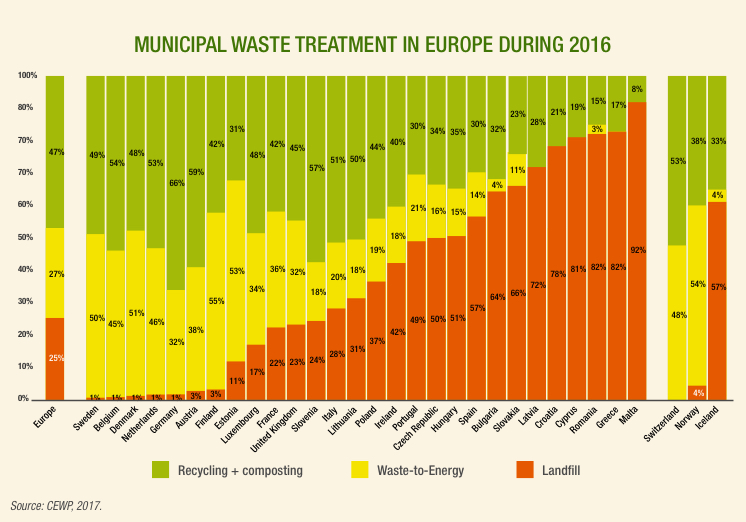 Municipal waste treatment in Europe during 2016.