The species that have survived extinction thanks to environmental conservationism

Experts estimate that 99 % of the animals that once inhabited the earth no longer exist and human intervention has had a lot to do with these disappearances. Nevertheless, on other occasions it has managed to allow other species to survive, thanks to environmental conservationism. Discover 10 animals that have been saved from extinction. 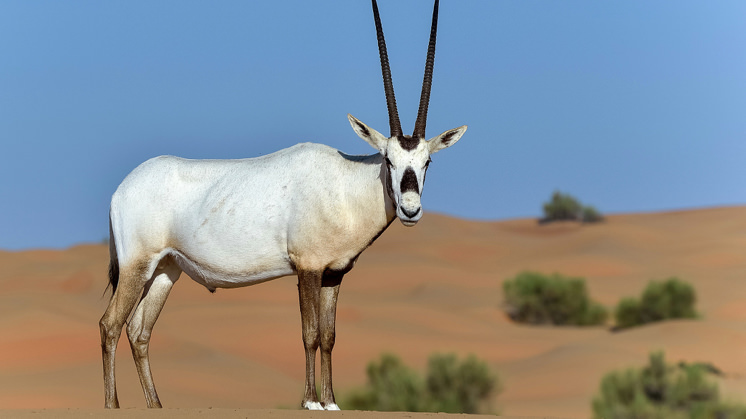 The Arabian Oryx is one of the animals saved from extinction by environmental conservationism. 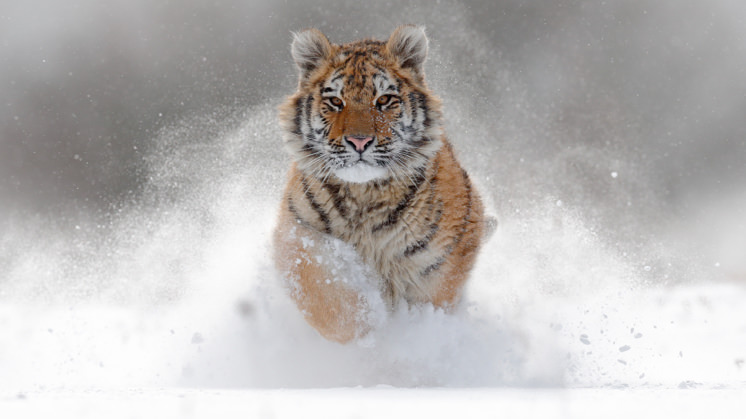 The Siberian tiger is one of the animals saved from extinction by environmental conservationism. 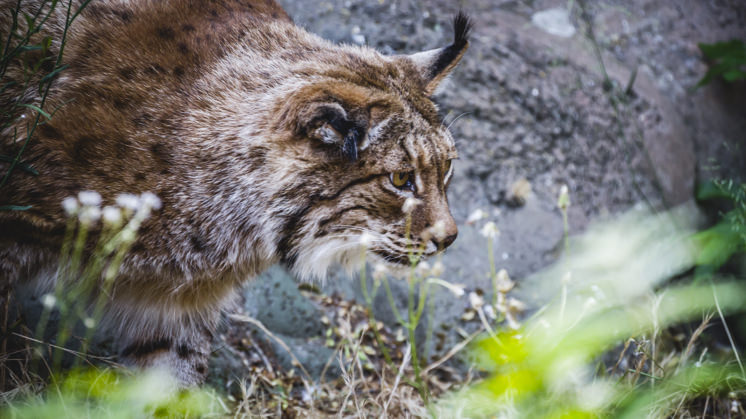 The Iberian lynx is one of the animals saved from extinction by environmental conservationism.

The African white rhino (Ceratotherium simum) had its days numbered towards the end of the 19th century. At that time not even the most optimistic held out much hope for the survival of a species of which less than 100 remained in the whole of Africa due to poaching and the spread of colonialism. Today, this impressive animal is somewhat further from extinction with around 18,000 specimens in the wild, according to the International Union for Conservation of Nature (IUCN), a true miracle of environmental conservationism.

WHAT IS ENVIRONMENTAL CONSERVATION

Conservationism is a social and political movement that promotes the protection of the environment and biodiversity in the face of pollution, climate change, the destruction of ecosystems and other factors attributed to human activity. Unlike ecologism — which opposes any interference by man on nature — conservationists support the sustainable exploitation of natural resources.

Environmental conservationalism has developed particularly since the 19th century and is today represented at global level by the IUCN. This international organisation has been cooperating since 1948 in projects with governments, communities and other institutions, supplying experience, scientific knowledge and recommendations to slow the deterioration of habitats, restore ecosystems and improve animal welfare.

The extinction of species is a natural part of evolution i.e. natural selection and the survival of those that best adapt. Throughout history thousands of animals have disappeared — from the mammoths, extinct for over 3,700 years, to the more recently lost Tasmanian wolf, Caribbean monk seal and Zanzibar leopard —. The following are some of the main causes: habitat degradation, poaching and overexploitation, the introduction of invasive species and global warming.

Environmental protection and conservation measures are based on the organisation of space, protection of the natural heritage and correct resource management, and include some of the following:

The breeding of animals in captivity for subsequent release.

The creation of nature reserves and protected areas for endangered species.

The fight against wild animal trafficking the introduction of invasive species and indiscriminate hunting and fishing.

The reduction of emisions de CO2, and other greenhouse gases that speed up climate change and affect habitats and ecosystems.

The promotion of sustainable food production, responsible consumption and public environmental education to encourage a way of life that protects the environment.

According to the IUCN Red List of Threatened Species, there are currently over 31,000 species at risk of disappearance. But it's not all bad news because every year animals are saved from extinction thanks to environmental conservationism. Let's take a look at some of them:

1. The Grey Whale (Eschrichtius robustus). This Cetacean, growing up to 15 metres in length and weighing as much as 20 tons, was on the verge of extinction in the 19th century due to whale hunting. Today, however, its population numbers some  27,000 and its situation gives less cause for concern.

2. Mountain Gorilla (Gorilla beringei). Forecasts predicted that it would die out in 2000 due to the destruction of its habitat. Yet this African species has managed to recover and now numbers over a thousand.

3. Bald eagle (Haliaeetus leucocephalus). This is another animal saved from extinction that went from 417 pairs in 1960 to over 100,000 individuals today. And its numbers continue to increase.

4. Giant panda (Ailuropoda melanoleuca). The situation for this plantigrade mammal, native to the forests of China, remains delicate but is improving and today the species numbers over 1,850 individuals.

5. Arabian Oryx (Oryx leucoryx). This beautiful antelope was lost from the wild as a result of hunting. Today, thanks to breeding in captivity and subsequent reintroduction to its habitat, a wild population of 1,220 has been achieved. 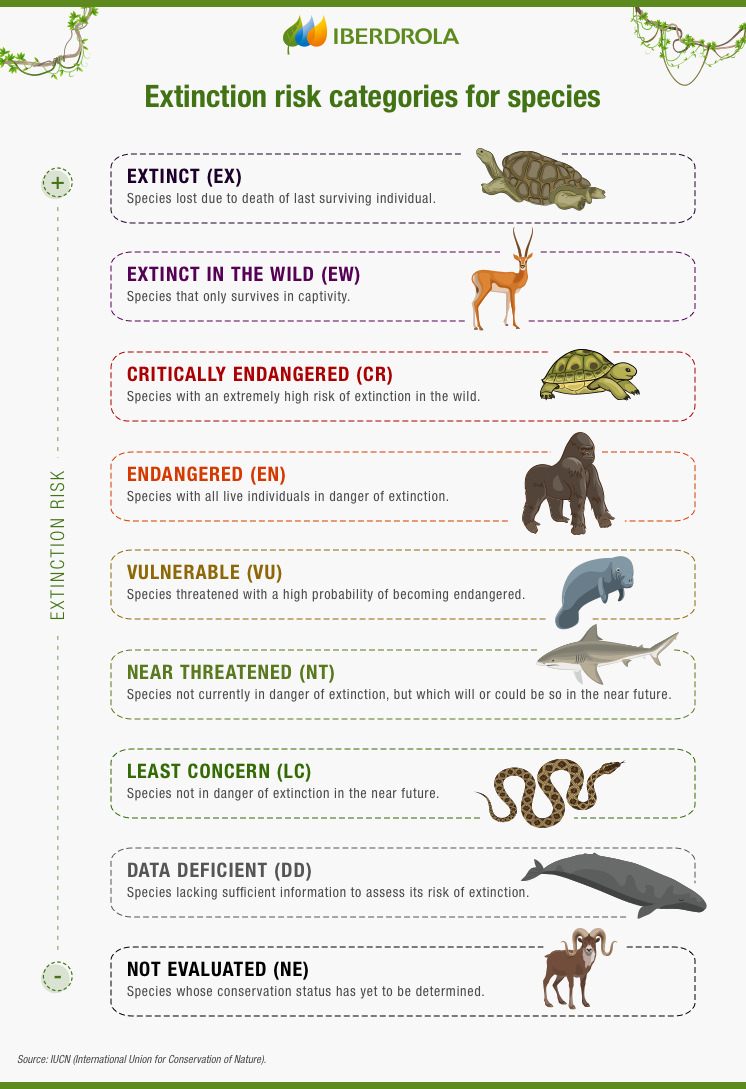 6. Iberian lynx (Lynx pardinus). This globally unique feline represents a considerable challenge for breeding in captivity due to its low success rate. Nonetheless, and though it remains in a very vulnerable situation, its current population is 156 adult individuals and growing.

7. Siberian tiger (Panthera tigris altaica). This is one of the planet's biggest cats and another of the animals saved from extinction: by the middle of the 20th century only 40 remained in the wild, while today there are about 450.

8. Golden lion tamarin (Leontopithecus rosalia). This Brazilian species fell victim to deforestation and its numbers dropped to 200 in the '80s. There are now some 1,400 adults, although its future is in the balance.

9. Wattled crane (Bugeranus carunculatus). This is Africa's largest crane and was close to extinction due to the destruction of its habitat. There are now between 6,000 and 6,300 adults, although declining again.

10. American bison (Bison bison). Among the animals saved from extinction this species also stands out, which, even though today they number some 500,000 — only between 11,000 and 13,000 in the wild —, declined from 40 million to less than a thousand in the 19th and 20th centuries as a result of hunting.