WHAT IS AN ECOVILLAGE?

Ecovillages as an ecological alternative

Ecovillages are small, self-sufficient communities that live from and for their natural surroundings. There are more than 10,000 ecovillages in the world, mainly in rural areas where their inhabitants build societies based on cooperation, self-sufficiency, renewable energies and ecological materials. Find out how they work... 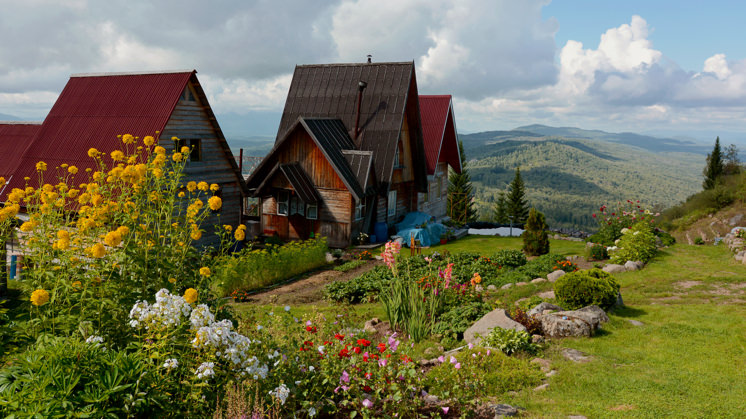 Most ecovillages have between 50 and 250 inhabitants.

The origin of these communities is unknown, but they received international recognition in 1995 during a global meeting of ecovillages held in Scotland. This symposium led to the creation of the Global Ecovillage Network (GEN), which laid the foundations of the current movement and now a bridge that connects thousands of projects on five continents.

In 1991, American philosopher Robert Gilman, one of the main theorists of these ecological communities, defined them as human-scale, full-featured settlements in which human activities are harmlessly integrated into the natural world in a way that is supportive of healthy human development and can be successfully continued into the indefinite future.

The development of ecovillages is based on one basic principle: concern for people and the environment. They encourage a way of life characterised by solidarity and ecology, where members of a community help each other to create more ethical, fairer and more egalitarian societies.

Ecovillages usually have between 50 and 250 inhabitants, although some have more than 1,000. The entire population has shared objectives and they work together to achieve them. How? They organise regular meetings where they share experiences and drive sustainable economic, societal, cultural and environmental practices.

THE BENEFITS OF ECOVILLAGES

They use natural resources

Respect for nature includes using renewable energy sources, such as solar and wind power. They also build with ecological materials like mud, wood and straw.

They educate the community

Commitment to these ideals encourages dialogue and participation in communities that resolve disputes through discussion and whose members are more likely to take part in decision making.

They choose regenerative technologies and activities, such as bioclimatic architecture and organic agriculture, and do not use machinery or chemical pesticides that harm the land. They therefore consume less energy and are favour the fight against global warming.

Around 3,500 million people — that's 50% of the world population — live in cities. According to the United Nations, this number will have risen to 5,000 million by 2030. According to this organisation, the metropolis — barely 3% of the world's land area — uses between 60% and 80% of total energy and produces 75% of carbon emissions.

The United Nations warns that urbanisation is also threatening fresh water supplies, waste water and public health. The international community fears that the damage may be irreversible, which has drawn attention to the sustainable model in ecovillages. They set an example of how to make progress without endangering the future of the planet.

The best GEN initiatives in 2017 — which received the Hildur Jackson Award — were an alternative childbirth centre in Kenya, a project in Mexico to rebuild areas affected by earthquakes in Puebla and Chiapas in a sustainable manner, and a plan to build accessible homes with scrap materials in rural areas of India.

In its last annual report (2017) the Global Ecovillage Network (GEN) said that there were around 10,000 ecological communities in 114 countries,

35 state networks, 135 GEN ambassadors, 130 trainers, 32 associations and 23 governments interested in implementing this type of programme internally. These are some of the most successful ecovillages:

Ten things you should know about ecological products

The circular economy, a new sustainable production and consumption model