There is a possibility that sea levels could rise by 2 metres due to global warming in the late twenty-first century. This would leave thousands of kilometres of coast at the mercy of floods, putting the safety of 745 million people all over the world at risk. 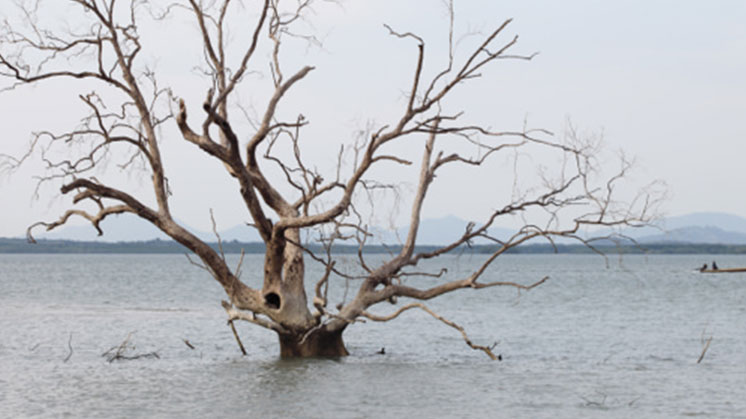 When astronauts from Apollo 8 took their first colour photographs of the Earth in 1968, the whole world could see that, in addition to being round, our planet is an intense blue. Half a century later, we know that tides and oceans cover 71% of the land's surface, which lends our world its characteristic tone that transforms it into a unique spot in our galaxy, and maybe even the universe as a whole.

WHY DOES THE SEA LEVEL RISE? CAUSES

What nobody imagined five decades ago is that CO2 emissions would heat the planet and cause the melting of the poles and glacier recession. The speed which climate change is progressing, intensified by human action, has raised the sea level about 7 cm since 1993 and about 18-20 cm since 1900, according to the US Government in its Climate Science Special Report (CSSR).

Some of the major causes of sea level rise are shown below:

In 2018, the scientific journal PNAS published a satellite study that attributes 50% of sea level rise of the last quarter of a century to the thermal expansion of water.

Melting of the poles

The experts from the Intergovernmental Panel on Climate Change of the United Nations Organization (IPCC) estimate that between 2006 and 2015 the melting of the polar caps injected more than 430 gigatonnes per year of fresh water into the oceans, thus contributing to a sea level rise of over 1.2 mm per year.

The University of Zurich (Switzerland) calculated in a recent study that deglaciation has led to the global loss of over 9 billion tonnes of glacial ice since 1961, raising the sea level by 2.7 cm. 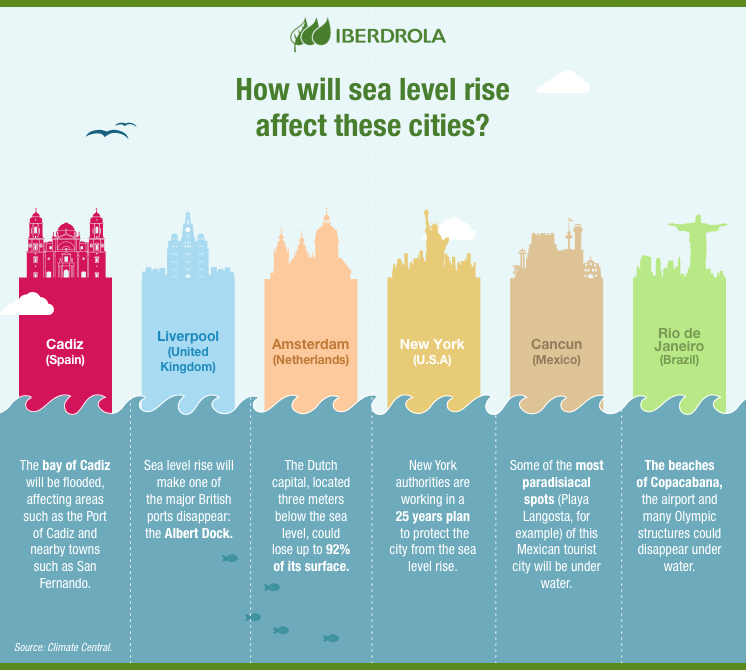 How will sea level rise affect these cities?

WHY DOES MELTING OCCUR?

The international scientific community has no doubts: global warming and the ozone hole are the main causes of the melting of the poles and glaciers. The increase in emissions of CO2 and other greenhouse gases (GHG) into the atmosphere — especially in the past decade — is raising the average temperature of the Earth at an unprecedented speed, accelerating the melting of glaciers and polar ice caps.

The destruction of the ozone layer by some chemical particles is also causing an increase in ultraviolet radiation that warms the planet. Global warming also affects the oceans, which absorb 90% of the Earth's heat contributing to the melting of the poles and the marine glaciers.

Sea level rise varies depending on the region of the world, posing the most severe threat to inhabitants of islands and coastal areas. Some 745 million people will live through the coming decades exposed to floods, storm surges and other severe events that will prove to be increasingly frequent and devastating to human life and the environment, as the IPCC warned in late 2019 in a special report on oceans and cryosphere.

Even the most optimistic do not deny the irreversible damage of sea level rise, such as the disappearance of numerous glaciers and a large part of the Arctic surface. The IPCC and other forecasts made to date predict the best case scenario to be a sea level rise of 20 to 30 cm by 2050, and 43 to 50 cm by 2100, as long as CO2 emissions drop and the Earth's land temperature stays at no more than 2 ºC more than the temperature of the late nineteenth century, as intended by the Paris Accords.

However, if attempts to contain global warming fail and the dreaded mass melting of Antarctica actually takes place, the predictions for 2100 place sea level rise between 84 cm and over 2 metres in the worst case scenarios, according to a study by the NGO, Climate Central, published at the end of 2019 by the journal, Nature. Sea level rise could worsen even over the next century and reach between 2.8 and 5 metres in 2300.