Deforestation in the Amazon and its impact on biodiversity

Deforestation is alarming the Amazon, how can we stop it?

Considered the lungs of the world, the Amazon rainforest has lost an area of forest larger than the size of France since 1970, according to Greenpeace. Behind this massive disappearance of tropical forest is deforestation, largely caused by man's hand. Here are the worrying facts, the consequences for the planet and mankind, and what solutions are being considered. 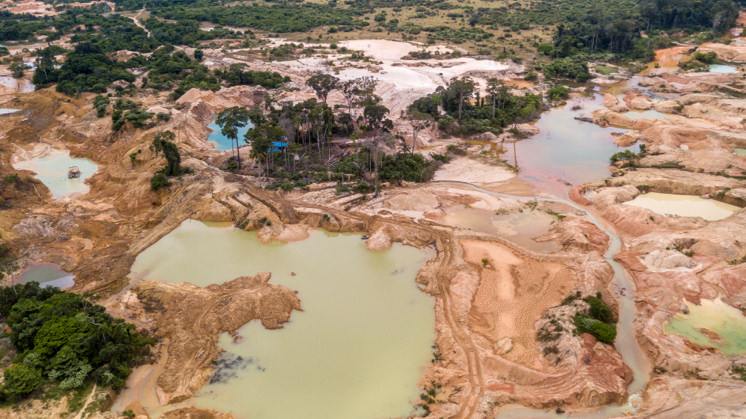 The ever increasing deforestation of the Amazon Basin over the last decades has become an environmental problem.

With a surface area of around seven million km2, the Amazon is the largest tropical forest on the planet. Specifically, it extends over nine countries, including Bolivia, Peru, Colombia and, especially, Brazil, which covers 60 %. Declared in 2011 as one of the seven natural wonders of the world, it is considered the lungs of the planet, as well as a unique reserve of biodiversity and home to ancestral indigenous cultures that help us better understand who we are.

THE DEFORESTATION OF THE AMAZON TODAY

Since 1970, according to Greenpeace data, the Brazilian Amazon alone has lost more forest area than the size of France. This year, according to Brazil's National Institute for Space Research (INPE), the record for deforestation in the month of April was broken, with 580 km2 lost, 42 % more than in the same month in 2020. This is not very flattering considering that the dry season, the season of greatest destruction, begins in May and reaches its peak in August.

The figures are particularly worrying, moreover, because they are double those of just a few years ago. In 2012, deforestation in the Brazilian Amazon fell to 4,571 km2, the lowest figure since INPE began taking satellite measurements in 1988 through the TerraBrasilis programme. The highest figure, on the other hand, was in 1995 with 29,059 km2 of forest missing, followed by 27,772 km2 in 2004. Since then, with the arrival of Lula da Silva to the government, this figure has fallen until reaching the minimum figure of 2012, before rebounding to the current alarming figures. 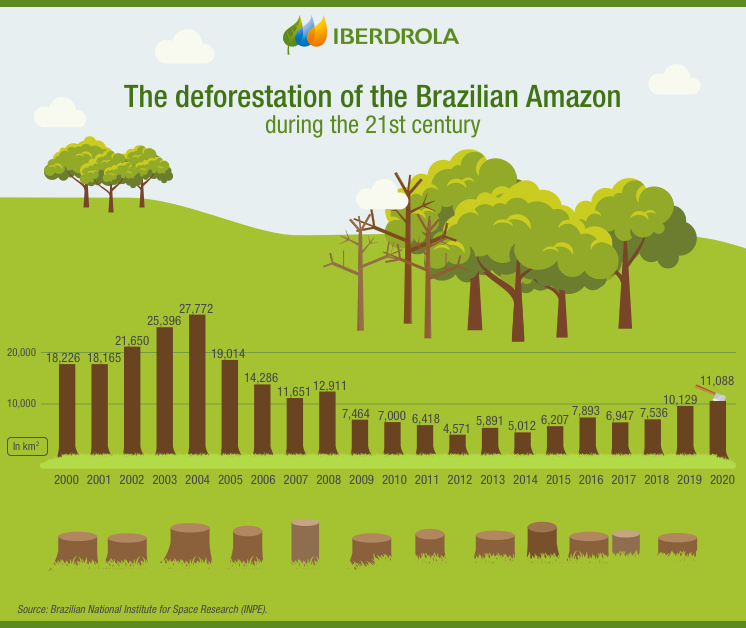 The deforestation of the Brazilian Amazon during the 21st century.

SEE INFOGRAPHIC: The deforestation of the Brazilian Amazon during the 21st century [PDF] External link, opens in new window.

CAUSES OF THE DEFORESTATION OF THE AMAZON

According to the Food and Agriculture Organisation of the United Nations (FAO), 80 % of forest loss in Brazil is directly or indirectly related to livestock farming. Brazil is, in fact, the world's leading meat exporter and, according to the Amazon Environmental Research Institute (IPAM), the areas with the highest rates of deforestation and most fire outbreaks are located near the cities with the highest concentration of cattle.

Another major cause of deforestation in the Amazon is logging, those activities related to the felling of trees, largely carried out illegally. The tropical timber market around the world depends heavily on the destruction of the Amazon rainforest and the United States, France, Portugal, Belgium and the Netherlands are among the countries that import the most illegally from the endangered Brazilian Ipe tree.

CONSEQUENCES OF DEFORESTATION OF THE AMAZON

Unsurprisingly, deforestation in the Amazon has adverse effects. These include:

According to Greenpeace, during the 1990s, the Amazonian jungle absorbed 2 billion tons of CO2, a figure which has now shrunk by half. The resulting build-up of CO2 in the atmosphere is contributing to climate change and increasing the temperature of the planet because of the greenhouse effect.

The Amazon rainforest is home to an estimated 10 per cent of the known fauna — as well as a large number of the unknown, hidden among its lush vegetation — and 20 per cent of the flora — more than 10,000 of its plants contain ingredients for medical or cosmetic use. The destruction of their habitat brings them to the brink of extinction, driving biodiversity loss.

According to a WWF report, 70 % of human diseases are caused by the destruction of nature. In the case of the Amazon, being the largest tropical rainforest on the planet, its progressive deforestation can lead to a considerable increase in zoonotic diseases — of animal origin, such as COVID-19 — with serious consequences for human health.

SOLUTIONS TO THE DEFORESTATION OF THE AMAZON

In their crusade to protect the Amazon rainforest, ecological organisations are demanding a series of commitments from different social stakeholders: