Organic farming, what is it and why is it good for the planet?

Agriculture is one of the most polluting economic activities, affecting the atmosphere, soil and water. For this reason, in the midst of the fight against climate change, a change of model that is committed to sustainability is urgently needed. The alternative is organic farming, which is based on respect for the natural dynamics of ecosystems and is, in short, more respectful of the environment and also healthier. 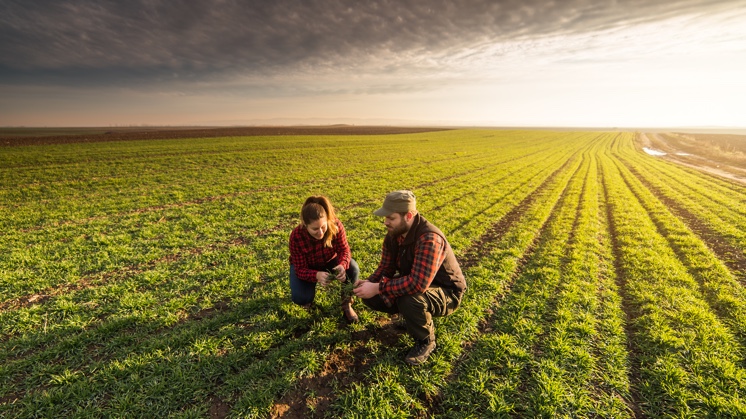 The current model of food production is unsustainable and organic farming is presented as an alternative.

According to the United Nations (UN), by 2050 there will be more than 9.5 billion human beings on the planet and that requires producing a lot of food — although not so much would be needed if food waste were reduced. Already today, agriculture and livestock farming generate 23 % of greenhouse gases according to the Intergovernmental Panel on Climate Change (IPCC), a worrying fact that invites us to rethink the model for future generations.

Conventional agriculture is one of the main causes of biodiversity loss, but it also generates other undesirable impacts by increasing air, water and soil pollution through the use of chemicals, which in turn pose health risks. Against this backdrop, organic farming, which is based on ecosystem management rather than the use of agricultural inputs, is more relevant than ever. Adopting this model in search of more sustainable food, together with new practices such as hydroponics or foodtech, is presented as the most viable alternative.

WHAT IS ORGANIC FARMING

Organic farming is a system of agricultural production based on the use of natural processes and resources — no chemicals (e.g. fertilisers or pesticides) or genetically modified organisms (GMOs) are used — in order to obtain healthier and more nutritious food while protecting soil fertility, preventing the spread of pests and respecting the environment. It is a system that, instead of using agricultural inputs, carries out specific practices depending on the characteristics of each ecosystem.

The development of this link between agriculture and ecology came about during the 20th century in response to the widespread use of certain pesticides and fertilisers, which prestigious studies have linked to diseases such as Parkinson's disease and various types of cancer, as well as to reductions in the populations of certain animal species. Today, organic farming draws on both good farming practices from the past and technological innovations linked to smart farming and modern knowledge about soil fertilisation and pest management. 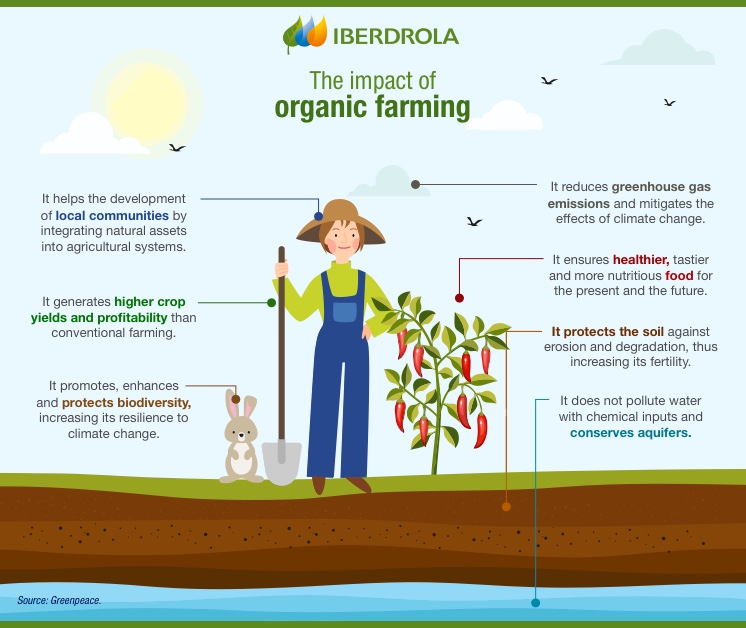 The impact of organic farming.

According to the European Commission (EC), around 8.5 % of farmland in the European Union (EU) is farmed using organic methods a figure that will rise to 15-18 % by 2030 if we continue at the current rate. To encourage these practices, the EC has an Action Plan for developing organic production [PDF] External link, opens in new window. with which it expects to increase this number to 25 %. According to the commission, the objectives of organic farming are:

This is based on the ideas of British botanist Sir Albert Howard (1873-1947), who spent a major part of his career in India. In his book An Agricultural Testiment, Howard explains the basis of organic farming: healthy soil to improve crops, the use of permanent ground cover and careful use of local resources. Howard believed that conserving soil fertility was the most important prerequisite for any permanent farming system and, in addition, it is essential for the health of plants, animals and humankind.

This form of agriculture was created in 1924 by the German philosopher Rudolf Steiner (1861-1925), based on a spiritual movement also founded by him, anthroposophy. One of its central themes is the idea of the organism-farm, i.e. understanding the farm as a living being in which each organ interacts with the others for the benefit of the whole and the cosmos. One of the peculiarities of this school is that it uses the position of the stars to draw up agricultural calendars.

Influenced by the Tao concept of wu wei, Japanese biologist Masanobu Fukuoka (1913-2008) came up with the idea of farming with no intervention. Fukuoka was guided by principles such as avoiding ploughing the soil or using prepared compost, pesticides or fertilisers and not pulling up weeds or pruning. According to this model, if nature has been capable of developing on its own throughout time, anything that humans do is a hindrance to natural growth and is a waste of time for farmers.

In addition to these three types of organic farming, other methods are being used around the world, such as permaculture, which creates balanced ecosystems through a holistic approach, and biological farming, which is characterised by its emphasis on biological pest control and the theory of trophobiosis — the relationship between plants and insects.

The following are some of the main benefits of organic farming:

It produces healthier, more nutritional food, which is also tastier.

Yields are higher, according to Greenpeace it can produce around 30 % more food per hectare than conventional farming.

Biodiversity improves. According to the European Union, organic fields have around 30 % more biodiversity, which improves crop resistance to climate change.

It reduces the number of infestations using natural means, for example, by introducing beneficial insects and birds that eat the unwanted pests.

By saving on chemicals, organic farmers obtain a higher income which helps rural economies to develop.

It does not pollute soil or water and consumes less energy than conventional farming, which is good for the environment.

Criticisms of organic farming revolve around an alleged inability to feed the world's growing population on its own, although there is no conclusive research on this. Another criticism, supported by data, is that organic products are more expensive for consumers, making them less accessible to lower-income segments of the population.