Do you know what pumped storage hydroelectric power stations are used for?

Their main purpose is to store water during off-peak periods, using it to generate energy during peak consumption periods.

Do you know what pumped-storage hydropower stations are used for?

Their main purpose is to store water during off-peak periods, using it to generate energy during peak consumption periods. The largest in Europe is La Muela II, built by Iberdrola on the River Júcar, in the municipality of Cortes de Pallás, Valencia. The company is also currently undertaking an ambitious project on the River Támega in northern Portugal.

Hydroelectric pumping technology is the most efficient system that allows to store energy in a large-scale today. It is more cost-effective and provides the electrical system with stability, safety and sustainability, whilst generating large amounts of energy with fast response times without resulting in any type of emission into the atmosphere.

The company is leader in energy storage with a capacity of 4,500 MW installed using pump technology, the most efficient energy storage method currently available, as it does not release any polluting emissions into the atmosphere and performs much better than the best batteries on the market. By 2022, Iberdrola expects to reach a total of 90 gigawatts per hour (GWh) of storage capacity, which implies an increase of almost 30 % with regard to 2018: 20 GWh more, equivalent to 400,000 electric battery cars or 1.4 million of residential-use batteries.

HOW IT WORKS A PUMPED-STORAGE HYDROPOWER STATION

OPERATION OF A
PUMPED-STORAGE HYDROPOWER STATION 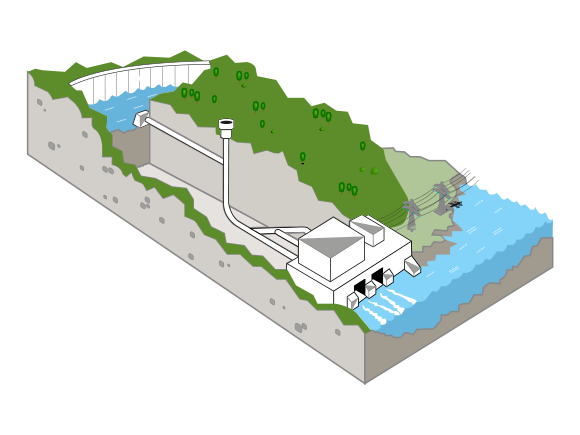 This kind of electric plant relies on two reservoirs at different altitudes that allow water to be stored when demand is low and then used to generate energy during peak consumption times in order to meet overall electricity demand.

During off-peak hours, typically weekday and weekend nights, excess generation capacity is used — which also has a lower market cost — to pump water from the lower level (1) reservoir to the upper one by means of a hydraulic pump that propels the water through a penstock (2) and conduction tunnel structure. The upper reservoir (3) therefore acts as a storage facility.

During peak hours, i.e. daylight hours, the pumping station functions as a conventional hydroelectric plant: water accumulated in the upper reservoir closed by a dam (4) is sent to the lower reservoir through the conduction tunnel (5). In this step the water passes through the penstock, where it acquires kinetic energy which is transformed into rotational mechanical energy in the hydraulic turbine (6). This is then turned into medium voltage, high intensity electricity in the generator (7). In some cases, a surge tank (8) is built to regulate the water pressure between the intake and discharge tunnels.

The next step sees the transformers (9) transmit the electricity produced in the plant, for consumption by the homes and industries that form part of the grid (10) via high voltage transmission lines.

Once the electricity is generated the water falls through the drainage channel (11) to the lower reservoir, where it is stored again.

La Muela II is the largest pumped-storage hydropower plant in Europe, located on the Cortes de Pallàs reservoir on the right bank of the Júcar river. Its annual output is around 800 gigawatt hours (GWh), enough to provide the electric consumption for close to 200,000 households, duplicating that of the Cortes-La Muela complex to reach 1.625 GWh — the annual demand of almost 400,000 families —. The plant features a hall with four groups of reversible turbines, allowing it to take advantage of the 500 metre altitude difference between the artificial La Muela dam and the Cortes de Pallás reservoir to produce electricity.

Another of the Spanish group's major pumping initiatives is the Tâmega hydroelectric complex, which will involve the construction of three new power plants on the river of the same name,a tributary of the Duero located in northern Portugal, near Oporto. The three power plants will total 1,158 MW installed capacity, representing an increase of 6% in the total installed electrical power in the country. The complex will be capable of producing 1,766 GWh per year, enough to meet the energy needs of the neighbouring towns and the cities of Braga and Guimarães (440,000 homes). In the same way, it wil contribute almost 900 MW of pumping capacity to the portugueese electric system, wich implies an increase of 40 % with regard to pumping megawatts that nowadays are provided by the country.