An interview with Sandra Sánchez

AN INTERVIEW WITH SANDRA SÁNCHEZ

"Being told no so many times toughened my personality"

Sandra Sánchez is the best female karateka in history in the kata discipline. To achieve this, she had to work hard and overcome countless negatives. Despite everything, she avoids the word 'sacrifice' because karate is what she loves to do. We invite you to know her more closely. 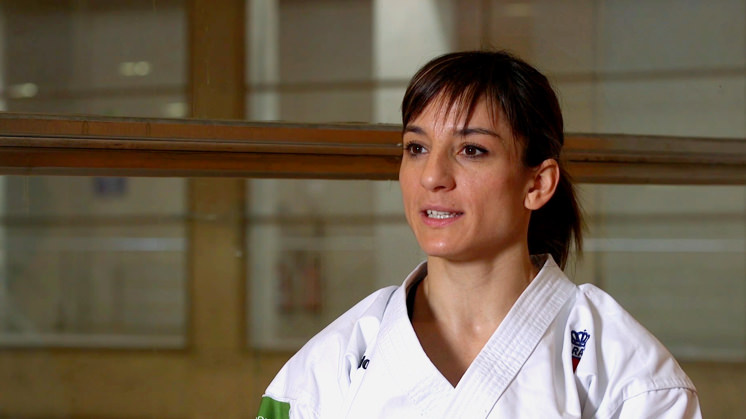 An interview with Sandra Sánchez, world women's kata champion in 2018.

When this girl from Toledo swapped her ballerina outfit for a karateka's kimono, she couldn't have imagined what her determination would lead her to in the future. After a lot of work, Sandra Sánchez earned a place in the national team at 32 years old. Now, at 37, she looks with a mixture of pride and disbelief at being chosen as the best karateka in history by the International Karate Federation. "I have conflicting feelings about it. On the one hand I don't believe it, but on the other I am so happy to have achieved it."

Karate will début with Olympic status in Tokyo 2020. There, Sandra will continue with the routine that has made her number one in the world: "When I jump on the tatami I try not to think. The referees disappear, the audience disappears, the hall disappears, and I repeat over and over in my mind: you have trained a lot for this moment. Just get out there and do it."

Let's go back to the start. What drew you into the world of karate?

I started when I was four years old. My parents decided that my brother and I should both do some sort of extra-curricular activity. My brother was enrolled in karate and I was signed up for ballet. One thing I've always said during my life is: "If Paquito can do it, then I can, too." That's why I went with him and stayed to watch the class. To start with, my parents thought I was having a tantrum: "We'll take her to karate for a few days, and when she gets over it, she can go back to dancing." But I stuck with the karate. These days, my brother is still proud to say: "You're the world champion because of me."

You didn't join the national team until the age of 32. What was it like during all those years before all your hard work was rewarded?

I always entered myself for the Spanish championship and managed to win medals, but for one reason or another I was never selected for the national team. Either as an individual or in a team. Of course, it was disappointing because sometimes you train very hard and even so, they still say no and no again. But this just motivated me, because I realised that there was room for improvement and that my karate could get better regardless of whether I won or not and whether or not I managed to get onto the team. It made me stronger and toughened my personality to keep trying and never give up.

How does it feel to be on a tatami?

I try not to think. I'm on my own. The judges, the audience and the hall disappear. I imagine I'm training, as though I were doing the kata to Jesús — my trainer, to relieve the stress. And I say to myself, over and over again: "You've trained hard for this moment. Just get out there and do it."

You are a tireless worker. What sacrifices have you made to achieve this standard?

I try not to use the word sacrifice because karate is not a sacrifice for me. This is my choice and I have given it priority over other things. It's true I haven't been able to go out so much at weekends because of competitions, but I like competing. What I do find more difficult are occasions like Fathers' Day and my nephew's or my brother's birthday, when I am not with them.

Women's sport is on the rise but there's a still long way to go to achieve true equality. What are the next steps?

In the beginning, there were only two women in the dojo (gym). Things have already come a long way, even the championships, but there's still a long road ahead. Within the karate world, and I think this is applicable to any sport and to society as a whole, there's a lack of awareness among men. These days, 80-90% of managers in the karate world are men. Whether you like it or not, this means there are no equality policies. So, we need their commitment to work together towards the same goal. As a woman, I don't want favouritism. I just want the same opportunities.

How did it feel to be named the world's best karateka?

I remember the many times when people said I wouldn't succeed, but I also remember the people who did support me and said yes, I deserved to be there, that I had what it takes and that I should keep persevering, because my time would come.

Sandra Sánchez, a story with soul