What are Green Bonds and what projects do they finance?

Green bonds are specifically destined for the funding or refunding of green projects, i.e. projects that are sustainable and socially responsible in areas as diverse as renewable energy, energy efficiency, clean transportation or responsible waste management. Iberdrola has consolidated its status as the biggest group issuer of green bonds in the world; and at the start of 2021 it issued the biggest hybrid green bond in history, worth €2 billion. A total of 90 % of Iberdrola's 2020-2025 investment plan - with an allocation of 75 billion euros until 2025 and an estimated of 150 billion euros to 2030 — is aligned with the European Union taxonomy for mitigating climate change. 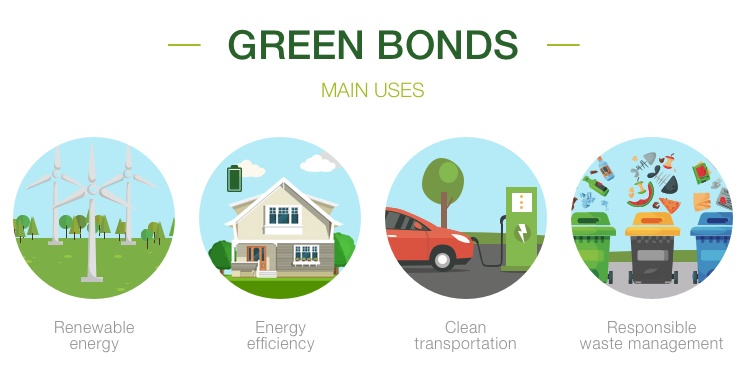 Main uses of the funds from a green bond.

WHAT ARE GREEN BONDS?

Green bonds are a type of debt issued by public or private institutions to finance themselves and, unlike other credit instruments, they commit the use of the funds obtained to an environmental project or one related to climate change.

On 5 July 2007, the European Investment Bank (EIB) launched a very special issue for the first time: green bonds. But what are green bonds and why they are so relevant? They can be distinguished by their goal: to fund projects that contribute to achieving the Sustainable Development Goals — number 7 (affordable and non-contaminating energy) and number 13 (Climate action) —.

Green bonds are wholly used for green projects that impact positively on the environment. For instance:

Iberdrola has its own issue brand, inspired by the criteria established by the International Capital Market Association (ICMA): the Green Bond Principles [PDF] External link, opens in new window.. The core ideas are:

IBERDROLA, THE LARGEST GREEN BONUS ISSUING GROUP IN THE WORLD

In 2014, Iberdrola became the first Spanish company to issue a green bond. The group is an international model for this type of financing, fact that has been recognized for several consecutive years in the Sustainable and Responsible Capital markets Awards

Iberdrola continues to be the world's leading business group in the issuing of green bonds, having issued over 13.8 billion euros through capital markets in a total of 23 operations since April 2014. Likewise, 90 % of the group's 2020-2025 investment plan and growth up to 2030 —endowed with 150 billion euros up to 2030 — is aligned with the aforementioned European Union taxonomy.

In February 2021, the company issued the biggest hybrid green bond in history, for €2bn. With this it met the hybrids target set for this financial year to issue hybrid operations worth €2bn in a single month. The bond registered a demand in the market of €9bn, which meant that the offer is over four times subscribed. The funds obtained will go to financing the offshore wind farms Saint-Brieuc, in France, and Baltic Eagle, in Germany.

In April, Iberdrola also updated its Euro Commercial Paper Programme (ECP), with new features including an increase in the maximum outstanding balance limit to 5 billion euros — from the previous limit of 3 billion euros — and the incorporation of sustainability into the Programme, which assumes a series of commitments in environmental, social and governance matters. 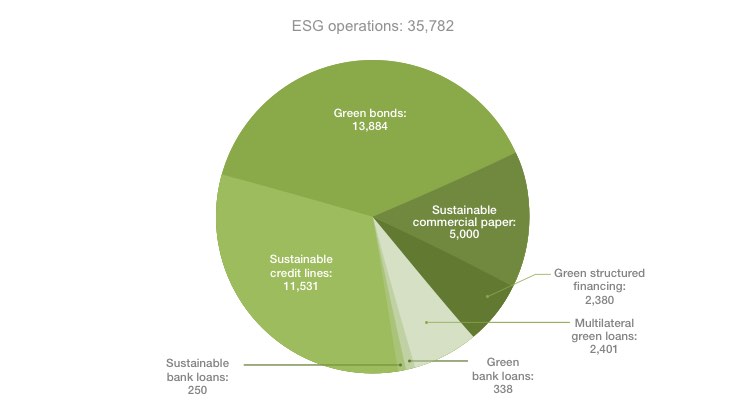 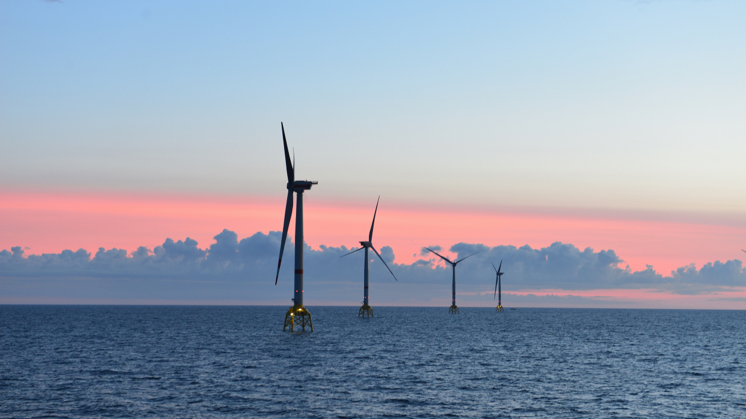 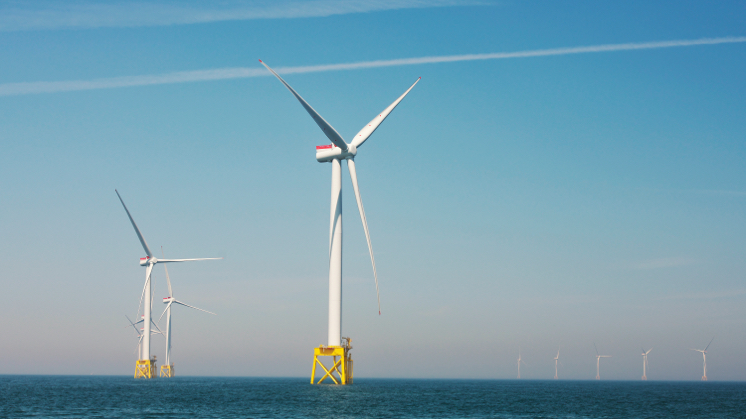 In 2020, Iberdrola was the first Spanish company to reopen the bonds market during the coronavirus pandemic, which it did with a transaction for a value of 750 million euros with a maturity of more than five years (June 2025). In line with the group's strategy, the funds obtained will go to financing and refinancing, whether totally or partially, renewable investments in Mexico and the United Kingdom, mostly onshore wind farms. By developing and commissioning these facilities, the company aims to contribute to economic recovery and protect jobs amid the difficult situation we are experiencing.

Since its first green operation, Iberdrola has successfully completed a total of 12 public issues of green bonds as a corporation, which include other green bonds issued by its subsidiaries. Such is the case of AVANGRID* (Iberdrola's subsidiary in the United States), which, in November 2017, issued its first green bond, for 600 million US dollars, and in May 2019 issued another green bond, this time for 750 million US dollars, plus another 750 million in April 2020.

In June 2019, the Brazilian subsidiary, Neoenergia**, issued its first green infrastructure debentures, for a face value of over 1.2 billion Brazilian reais, and in 2020 it carried out another green operation — through its subsidiary Itapabapoana — for an amount of 300m Brazilian reais to finance investment in transmission lines.

The funds obtained through these operations have been devoted to financing or refinancing investments in projects which fulfilled environmental and sustainable development criteria, validated both by Iberdrola and, subsequently, by Vigeo Eris (an independent entity). These projects are basically framed within the field of renewable energies.

As the main issuer of green bonds and provider of renewable energy, Iberdrola supports sustainable finance as a way of speeding up energy transition, along with any other initiative that seeks to tackle climate change

Iberdrola, global leader in the fight against climate change

Iberdrola also became the first Spanish issuer to join the Nasdaq sustainable bond network: Nasdaq Sustainable Bond Network (NSBN). This network, which brings together a number of issuers, provides standardised information on their financial frameworks and the principles they apply (GBP of ICMA, for example), as well as data on the impacts that each has on Sustainable Development Goals.

The group continues to advance towards its target of 100 % of its credit lines being green or sustainable by 2025 — today the figure stands at 90 %.

In April 2021 it signed a new multi-currency credit line with 21 banks, worth €2.5bn, linked to sustainability indicators: the reduction of emissions intensity by the company (SDGs 7 and 13) and an increased presence of women in managerial positions (SDG 5).

This subscription, for a duration of five years extendable for a further two, has been sealed with conditions at pre-COVID-19 levels. Moreover, this is the first operation by a Spanish company linked to Risk-Free Rates (RFR), the indices that will serve as a model for future financing instead of the LIBOR.

In addition, for the first time, the financing introduces a financial contribution to a sustainable project, the amount of which will vary according to the degree of compliance with the indicators.

In 2016, Iberdrola took out with BBVA the world's first green loan to be issued to a utility. And in April 2018, the first green loan in Latin America was signed, when Iberdrola Mexico, a wholly-owned subsidiary of Iberdrola, signed a green bank loan with a series of international financial institutions for 400 million US dollars, which were used to refinance some of the company's renewable assets in that country.

Likewise, in 2021 the company has signed the first energy loan in Europe linked to water consumption, for a sum of €250 million over five years, being the largest operation carried out in Spain in the framework of the Circular Economy programme, which is worth €6 billion, launched by Intesa Sanpaolo in its Business Plan 2018-2021.

Iberdrola has also carried out green financing operations with supranational bodies. In 2019, it signed a €400 million green loan with the Instituto de Crédito Oficial (ICO), the first granted by this institution. In 2020, a green financing agreement was signed with the European Investment Bank (EIB) and ICO, under which the former will contribute €600 million and the latter €200 million, through green loans to finance the construction of more than 20 projects with a total capacity of over 2,000 MW. And in 2021 the company has signed the first loan granted by the ICO to promote green hydrogen — for an amount of €6 million —, which will finance Spain's first-ever public green hydrogen station, which will be operated by Iberdrola to supply renewable hydrogen to the fleet of buses operated by Transports Metropolitans de Barcelona (TMB).

We champion the energy transition

The group is committed to renewable energies, grids, energy storage and smart solutions for its customers as the main pillar of its clean, reliable and smart business model.

Iberdrola group started investing in renewable energy more than two decades ago as the foundations on which the build a clean, reliable, smart business model.

ALL THE INFORMATION ABOUT

How do green bonds work?

A bond is a type of debt title issued by a company or public administration to finance itself. This debt title is set up as a legal contract for money owed which can be bought and sold between parties.

The investor in a green bond becomes a creditor of the issuing entity, and the latter will have to pay back the money borrowed through this bond — within the estimated time — plus a previously (usually) fixed amount of interest, known as a coupon. It is therefore a fixed income instrument.

The funds obtained will be destined exclusively to financing (or refinancing) sustainable projects that respect the environment, and initiatives related to climate change. For example, they might be used to buy a fleet of electric vehicles, or to purchase wind turbines, etc.

What are the requirements for the issue of a green bond?

These types of bonds may be issued by supra-national institutions, public entities (municipalities, states or federations) and private companies. To issue them, the issuing entity must share financial information with the control mechanisms, rating agencies and investors. Also, the issuers designate investment banks as "subscribers" (they will get the benefit of their technical knowledge of the bonds market, of government regulations and of other similar factors.

What is the price of a green bond?

The price of green bonds is very similar to that of ordinary bonds, being subject to the market conditions at the time of issue. What normally happens is that investors see no additional benefits, nor do they pay any more, for the ecological aspect of this funding. It is however true that investors in green bonds have made sales at higher prices due to green bonds being less common. Nevertheless, demand has soared and more and more traditional investors are backing them.

What are the Green Bond Principles?

What are the Green Bond Principles?

The Green Bond Principles, attempt to provide clarity to the definition and processes associated with green bonds, due to their rapid growth in the market. At the start of 2014, a group of banks began to formulate these principles, which have been steadily added to and enhanced over time. These principles help the integrity of the Green Bonds market through guidelines that recommend transparency, publicity and reporting.

They focus on the use of the funds, their main objective being to support issuers in the transition of their business model towards greater environmental sustainability. The Los Green Bond Principles have four main components:

Green bonds are a type of debt classified as Socially Responsible Investment. On issuing this type of bond, a company — private or public — receives funds that must be used exclusively to finance or refinance (partly or fully) projects with a positive impact on the environment. However, there is another more specific type of bond: the blue bond. This bond (which is newer, first issued in 2016) is designed to finance exclusively projects related to the preservation and protection of marine ecosystems (SDG 14).