Iberdrola group will build its second major offshore wind project in the Baltic: Baltic Eagle. Located 30 kilometres to the northeast of Rügen island off the coast of Pomerania (Germany), this new 476 megawatt (MW) installation will supply renewable energy to 475,000 households.

Baltic Eagle, with a capacity of 476 MW, will have 50 wind turbines of 9.53-MW of unit power on monopiles, for an annual production of 1.9 TWh, sufficient to meet the needs of 475,000 homes and avoid the emission of almost one million tonnes of CO2 into the atmosphere every year.

The group has selected MHI Vestas Offshore Wind as the official supplier of the MVOW V174 wind turbines to be delivered and installed by 2024. These turbines have the industry's largest commercially proven rotor size and most powerful output, with 174-m rotor blade diameter — whose swept area is 23,778 m2, equivalent to 3.3 football fields — and a hub elevation of 107 m above sea level. It will be the largest project Vestas has installed offshore in Germany.

For its part, the foundations will be carried out by Asturian Windar and German EEW SPC.

The first will manufacture in Avilés (Asturias) 50 transition pieces, which link the turbine towers to the foundations, through some 30 suppliers in the North of Spain. Fabrication works, which will create 800 jobs, run through to December 2022, with load out planned for the beginning of 2023.

The transport and installation of the foundations as well as the supply, transport and installation of the interconnection cables have been awarded to Van Oord. The Dutch company is deploying its 8,000-tonne heavy lift installation vessel, the Svanen, to install the 50 monopiles, which has installed more than 700 foundations across Europe. Van Oord will use its Nexus vessel and the Dig-It trencher, which will be adapted to the difficult sea floor conditions in the Baltic, to lay the cables between the various assemblies.

The offshore substation — central core whose function is to collect the electricity produced by the wind turbines and transform the voltage from 66 kV to 220 kV — will be installed and ran by 50Hertz, the transmission system operator in north-eastern Germany and the company responsible for connecting the offshore wind farm to the grid, and be used by both companies.

Weighing a total of 7,150 tonnes, it consists of foundations and a platform with transformers and electrical equipment. It will be shipped and installed by the marine shipper Heerema, and its structural elements will be manufactured by joint-venture Iemants-Fabricom.

The wind farm will be connected to the Lubmin onshore wind farm via two high voltage subsea cables, each measuring 90 km, which will also be installed by 50Hertz.

It will be located in waters between 40 and 45 metres deep and cover an area of 40 km2 to the northeast of Rügen Island. Activities at the wind farm will be undertaken from the port of Sassnitz-Mukran in Rügen. 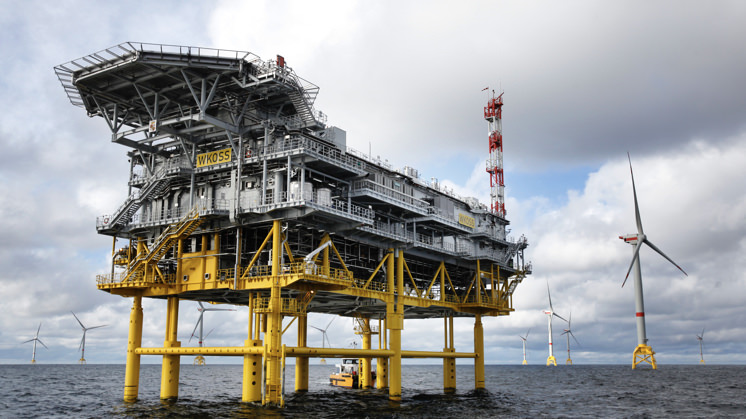 A general view of the Baltic Eagle offshore wind farm.

The operations and maintenance building will be located in the port of Sassnitz, with whom the company has signed a lease agreement.

This development of this project will create high-quality jobs along the entire value chain of the offshore wind sector, which has significant potential for growth, while helping to reindustrialise and modernise shipyards all over the continent.

The company was awarded this project in April 2018 in a second offshore tender launched by the Federal Networks Agency (Bundesnetzagentur), and it has now finalised the geotechnical and geophysical survey — worth more than 10 million euros —, essential to the construction and commissioning of this renewable plant.

All the necessary formalities for designing and acquiring the main components are progressing according to the schedule.

A MEGAPROJECT IN THE BALTIC SEA

The Baltic Sea holds an incredible potential of 93,000 MW for offshore wind in Europe. Alongside Germany, several countries, such as Poland, Sweden and Estonia are exploring new opportunities for offshore wind developments.

Baltic Eagle represents the second large offshore initiative promoted by the Iberdrola group in Germany, after the commissioning of the Wikinger offshore wind farm (350 MW) at the end of 2017. The company also has another offshore installation currently in development in Germany: Wikinger Süd (10 MW). These three wind farms, located next to the island of Rügen, will give rise to the largest offshore wind complex in the Baltic Sea, with a total installed capacity of 836 MW and a joint investment of €2.5 billion.

Baltic Eagle and Wikinger, with a combined capacity of 826 MW, will comprise the heart of the Baltic Sea Hub, which will act as a centre for offshore and onshore services, as well as provide local content for Iberdrola's projects in the Germany and the Baltic coastal countries. They will be able to produce enough energy to meet 45 % of the total electricity consumption of the state of Mecklenburg-West Pomerania and prevent the emission of 1.65 million tonnes of CO2 per year, thus contributing to meeting the emission reduction targets set by Germany.

In addition, the company has submitted a bid for the construction of a new farm in this sea: Windanker, with the idea of expanding this hub to more than 1 GW by the end of 2026.