The Iberdrola Ice Hockey League is now a reality

RFEDH is "proud and deeply grateful to a Spanish company such as Iberdrola which is forward looking in this way." Also, from this season onwards, the Copa de España will be known as the Iberdrola Copa de España. 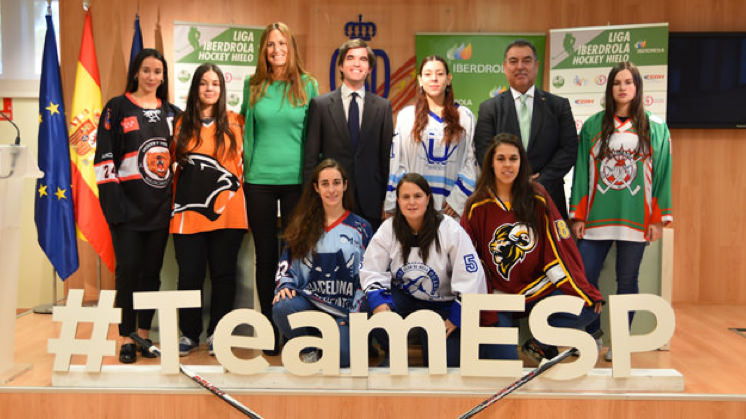 Representatives of the different teams attended the presentation of the new Iberdrola Women's Ice Hockey League.

The Royal Spanish Ice Sports Federation (RFEDH) and Iberdrola have reached an agreement by which the energy company becomes the main sponsor of the Women's Ice Hockey National League. As a result of the agreement, the competition will be renamed the Iberdrola Ice Hockey League (LIHH). Likewise, the Copa de España is changing its name so that, starting this season, it will now be called the Iberdrola Copa de España.

The agreement was presented at Spain's National Sports Council (CSD) in the presence of Jaime González-Castaño, the institution's Director General of Sports, Susana Pérez-Amor, Deputy Director General for Women and Sport of the CSD; Frank González, president of the RFEDH; representatives of Iberdrola, and one player from each team which takes part in the competition: Elena Álvarez, appearing for Majadahonda; Clara García, for Sumendi of Vitoria; Sonia Martínez, for CP Molenio of Logroño; Carmen Muñoz, for Txuri-Urdin of Sant Sebastian; Davinia Alfonsín, for CH Huarte of Navarra; Andrea Peral, for Valdemoro of Madrid and Tamara Grande, for ASME of Barcelona.

For the RFEDH, this support is a big boost, as its president, Frank González, said: "Other countries have already taken the initiative to commit to gender equality in ice hockey and, as president of RFEDH, I am proud and deeply grateful that a Spanish company like Iberdrola is embracing the future in this way."

"It breaks my heart that this sport is so unknown", confessed Elena Álvarez during the presentation of the agreement. The sportswoman believes that with Iberdrola's new sponsorship they will go "onwards and upwards". For its part, the CSD acknowledged that "we still have a long way to go and for that we need a travelling companion like Iberdrola. Sport and its main figures are essential drivers for our country's brand."