WHAT IS LIFI TECHNOLOGY?

LiFi, the internet at the speed of ligh

LiFi technology will allow us to connect to the internet using light from lamps, streetlights or LED televisions. In addition to being cheaper, safer and faster than wifi, it does not need a router. All you need to do is point your mobile or tablet towards a light bulb to surf the web. 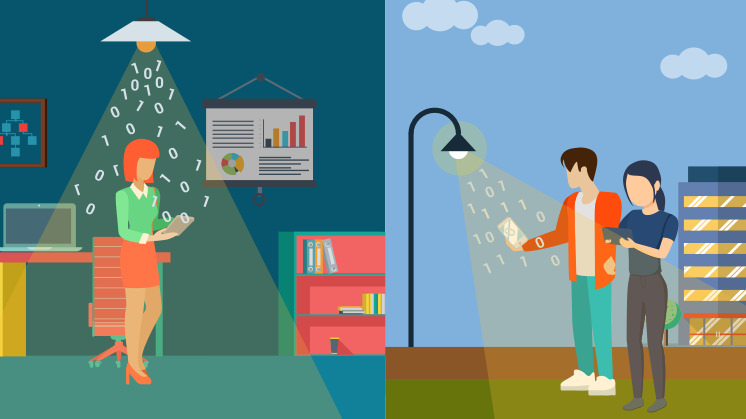 WHAT IS LIFI TECHNOLOGY?

LiFi (light fidelity) is a bidirectional wireless system that transmits data via LED or infrared light. It was first unveiled in 2011 and, unlike wifi, which uses radio frequency, LiFi technology only needs a light source with a chip to transmit an internet signal through light waves.

This is an extraordinary advance over today's wireless networks. LiFi multiplies the speed and bandwidth of wifi, 3G and 4G. The latter have a limited capacity and become saturated when the number of users surfing increases, causing them to crash, reducing speeds and even interrupting the connection.

With LiFi, however, its band frequency of 200,000 GHz, versus the maximum 5 GHz of the wifi, is 100 times faster and can transmit much more information per second. A 2017 study by the University of Eindhoven obtained a download rate of 42.8 Gbit/s with infrared light with a radius of 2.5 metres, when the best wifi would barely reach 300 Mbit/s.

Surfing at a petrol station
We will be able to connect to the internet in places where electromagnetic radiation is prohibited.
Fin ud on the map
By connecting to lampposts identified with a unique code we will be able to know where we are.
Communicating with traffic lights
Cars with LED headlights will be able to communicate with each other and receive traffic information.
Connecting our homes
We will be able to connect our refrigerator or dishwasher through light to create networks of electrical appliances.
Learning in museums
A work of art's lighting could connect to our mobiles to tell us the history of the piece or other information.
Talking underwater
Light waves travel further in water than other waves.
Protecting our privacy
Entities handling sensitive information will be able to send and receive data more securely.
Downloadable
shopping catalogues
Lighting in shops could give us more detailed information on products and discounts.

THIS IS HOW LIFI TECHNOLOGY WILL CHANGE OUR LIVES
LiFi technology could change some of our habits. These are the most striking ways:
Source: University of Edinburgh LiFi Research and Development Centre.
0
1

SEE INFOGRAPHIC: This is how LiFi technology will change our lives [PDF] External link, opens in new window.

LiFi technology emerged thanks to the German physicist Harald Haas, a professor and director of the LiFi Research and Development Centre at the University of Edinburgh, and it could reach our homes in just a few years. It is currently being tested with LED luminaires in offices around the world and the aeronautical industry is already working on solutions to integrate it into commercial aircraft.

Airports, hospitals and city streets are other spaces where LiFi technology could become popular. The boom in mobile devices and the growing demand for higher bandwidth systems are expected to drive the development of this social technology in the next decade, as noted in the Global Market for LiFi Technology Analysis and Forecast 2018-2028.

This report estimates that the global market will reach a value of nearly $36 billion in 2028, and that over the next 10 years the compound annual growth rate will rise to 71.2%. The Asia-Pacific region will lead the global growth in LiFi technology up to 2028, overtaking Europe, which remained at the forefront in 2017.

LIFI VS. WIFI: WHO GETS TO WEAR THE WIRELESS NETWORKS CROWN?

LiFi technology is faster, cheaper and even more secure than wifi. Its main advantages include:

Faster: the current speed of wifi oscillates between 11 and 300 Mbit/s, while that of LiFi is also highly variable according to the last studies carried out. The most widely accepted speed is 10 Gbit/s, but it has been proven that it could reach 224 Gbit/s and that a 1.5 Gbit film could be downloaded in thousandths of a second.

Cheaper and more sustainable: it is up to 10 times cheaper than wifi, requires fewer components and uses less energy. All you have to do is turn on a light!

More accessible: any light fitting can easily be converted into an internet connection point, as only a simple LiFi emitter needs to be fitted.

More secure: light does not pass through walls like radio waves do, and this prevents intruders from intercepting LiFi communications through a wireless network.

More bandwidth: the light spectrum is 10,000 times wider than the radio spectrum, which increases the volume of data it can carry and transmit per second.

No interference: electronic light does not interfere with radio communications, interact with other systems or compromise transmissions from aircraft, ships, etc.

Wireless and invisible: LiFi takes advantage of lights and dispenses with the router, so it works without the need for cables. In addition, it can operate with infrared light, which is invisible to the human eye, or with visible LED light at very low intensity so as to avoid disturbance.

No saturation: internet connection via light could prevent the collapse of the radio spectrum which, according to LiFi's inventor Harald Haas, could take place by 2025.

With the emergence and development of LiFi technology, many foreshadow the obsolescence of wifi and other wireless networks. We will have to wait a few more years to see if streetlights, in addition to illuminating our streets, will connect us to the internet at the speed of light.