Synchronism check between different areas of the network

British Smart Power Networks (SMPnet) was the winner of this challenge in the search for innovative solutions that promote voltage synchronisation measurement systems between remote points, adapted to the needs of the distribution grid. The challenge was launched by Iberdrola through its International Startup Programme - PERSEO, the Global Smart Grids Innovation Hub and Catapult. 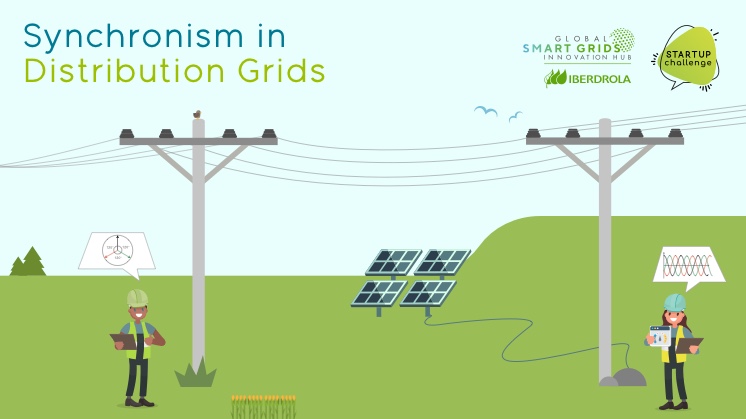 The winner will sign a collaboration agreement and be able to try out their project.

The team of experts at Iberdrola's Network's area, in collaboration with Catapult Energy Systems

External link, opens in new window., selected British startup Smart Power Networks (SMPnet) as the winner of this challenge launched by Iberdrola through its International Startups programme - PERSEO, the Global Smart Grids Innovation Hub and Catapult, at a presentation attended by more than 50 British entities.

The initiative was launched to identify competitive and innovative solutions for making measurements in the phases of the distribution network, keeping the system balanced, to help in the more than 1.2 million kilometres of electricity transport and distribution lines the group has in the United States, Brazil, the United Kingdom, and Spain.

After analysing the limitations of the telecommunications system and defining the minimum requirements of the inverter control system, SMPnet

In a second phase, in collaboration with national power electronics manufacturers, members of GSGIHub, SMPnet may test its developments in the power laboratory, this time on real equipment for future implementation in the network.

THE REASON FOR THE CHALLENGE

Electricity is transmitted within what we call a "three-phase system", where three single-phase alternating voltages travel from generation assets to consumption points, passing through transmission and distribution grids, maintaining their frequency and with limited changes in their angles.

However, distributed generation allows for the creation, intentional or not, of islands, areas of the distribution grid that operate disconnected from the rest. In these islands, the voltage is generated internally and is therefore not synchronised with the rest of the grid.

Iberdrola's team of experts in the Grids area uses various technologies to synchronously measure the magnitudes and angles between the phases along different points of the electricity grid. In order to maintain system stability, these phasor measurement units (PMUs) are used mainly in transmission grids, since they have been traditionally expensive.

However, there is an increasing need for phasor measurement solutions in distribution grids, which are required to an even greater extent due to the major changes and expansion these grids are undergoing as a result of the energy transition and the rise of distributed renewable generation.

This challenge was one of the first global activities of Iberdrola's new smart grid innovation centre, the Global Smart Grids Innovation Hub. This centre aims to be a world reference in smart grids — through open collaboration and coworking between i-DE

External link, opens in new window. technicians with suppliers, startups and different organizations around the world — and will enable it to respond to the challenges of the energy transition.

The hub will act as a driving platform for innovation, combining the company's technological capacity with that of collaborators: suppliers, universities, technology centres and startups. It will also attract strategic suppliers and international talent, thereby strengthening the business ecosystem.

Iberdrola has already identified more than 120 projects for future development with a value of 110 million euros. The lines of work, which are international in scope, will enable the development and deployment of innovative solutions for the activity of Iberdrola Networks throughout the world.

A world reference in smart grids

External link, opens in new window. was set up to accelerate the transformation of the UK's energy system and ensure UK businesses and consumers capture the opportunities of clean growth. The Catapult is an independent, not-for-profit centre of excellence that bridges the gap between industry, government, academia and research. We take a whole-systems view of the energy sector, helping us to identify and address innovation priorities and market barriers, in order to decarbonise the energy system at the lowest cost.

The selected project will be developed in collaboration with the technical specialists from the Iberdrola Networks area.

The prize will consist of us signing a collaboration agreement for the development of a proof-of-concept with PERSEO or any other relevant Iberdrola group company, who will assume the costs and provide the winner with the necessary technical support, giving access to infrastructures and real data to test the solution.

In addition, the startup will be included directly in the process of joining Iberdrola´s Global Smart Grids Innovation Hub, as one more collaborator who will be able to benefit from the services, activities and resources that are made available in the centre.

If the assay or proof of concept is satisfactory, Iberdrola may offer the participant the opportunity to scale up the solution by means of commercial agreements.

In addition, PERSEO may consider investing in the participant and/or challenge winner.