Photovoltaic cells: discover their evolution, their different types and the latest innovations

Solar energy, or photovoltaic energy, is one of the most efficient renewable sources at present and will be key in the process of decarbonising the planet. And all thanks to an essential part: the photovoltaic cell. This electronic device has the capacity to capture and transform light energy into electricity, and in recent years it has continued to evolve in terms of materials and manufacturing techniques. 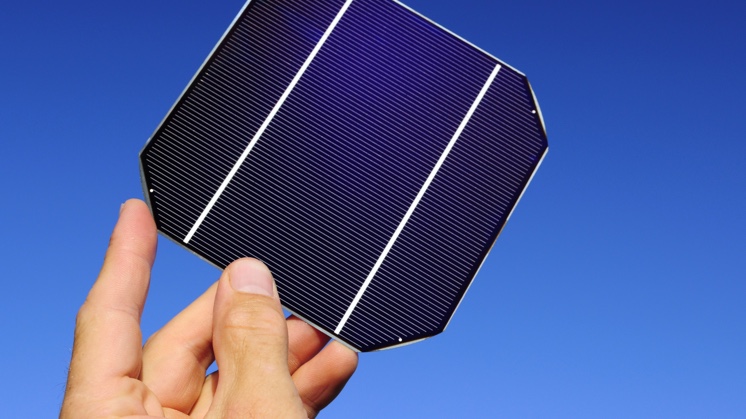 Photovoltaic cells have become much cheaper in recent years, which has encouraged the use of solar energy.

Photovoltaic energy, which is renewable, clean and inexhaustible, is a key pillar in the process of decarbonising the planet and in the fight against climate change. In fact, in many countries it will be vital for achieving the climate targets set for 2030, more so considering the falling cost of solar panels. Their proliferation is also helping to create green jobs and drive the sustainable development of the economy. And all this is possible thanks to an essential component: the photovoltaic cell.

WHAT IS A PHOTOVOLTAIC CELL

A photovoltaic cell is an electronic device that converts the energy in the solar radiation that reaches the earth in the form of light (photons) into electrical energy (electrons) thanks to the photoelectric effect. Major milestones in the history of the development of these cells, include:

Photovoltaic cells are composed of two oppositely charged semiconductors separated by a neutral junction: The negative layer (N-semiconductor) is generated by modifying a silicon crystal structure to achieve an excess of electrons and the positive layer (P-semiconductor) lacks an electron to be stable, so it behaves as a positive charge within the crystal lattice. Therefore, a charge neutralisation occurs in the junction area (P/N junction) which, when the N area is exposed to sunlight, releases electrons by increasing the potential difference between the N and P areas. This difference in a closed circuit gives rise to an electric current, part of which is the electricity available to the user. 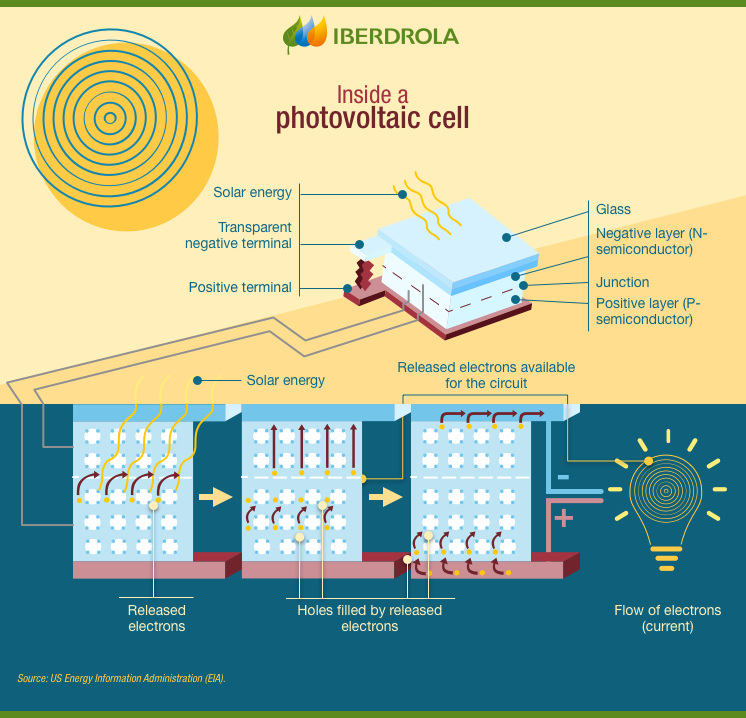 Inside a photovoltaic cell.

These days, most photovoltaic cells are made of silicon, because this semiconductor material is plentiful and cheap. It is purified and crystallised before it is cut into thin layers to form the cell. Depending on the silicon manufacturing process, these are classified as:

They are made up of a single silicon crystal with a uniform structure and guarantee a superior performance to the other silicon cells (18-25 %), because the perfect alignment of their atoms encourages conductivity. Their drawback is that they take longer to manufacture and are more expensive than other types.

They are made up of numerous silicon crystals and, although the manufacturing process is more economical than that of monocrystalline silicon, their output is inferior (16-20 %).

With an irregular atomic structure, this silicon is deposited in thin films on flexible substrates, like glass, metal and plastic, enabling these panels to adapt to any surface for superior architectural integration. Their performance is far lower than that of crystalline silicon (6-8 %), but there are more economical.

As well as these cells, in recent years there have been innovations that are taking this technology to the next level. Multi-junction photovoltaic cells contain multiple P/N junctions made with different semiconductor materials, each of which produces an electric current in response to different wavelengths, in the laboratory setting they are around 45-50 % efficient under concentrated sunlight. Likewise, tandem solar cells can achieve higher yields through monolithic cell stacking with different band intervals, particularly, with a material that promises to be important in the future: perovskite.

These days, most photovoltaic cells are used to produce energy for the following purposes:

They are often used to power lighting systems and other electrical appliances in the home (washing machine, dishwasher, refrigerator, television, computer, etc.), for heating water, radiators and underfloor heating and for heating swimming pools, among other uses, thanks to photovoltaic self-consumption installations.

Coupled with storage batteries, this is the ideal solution for supplying electricity in isolated spots where the grid does not reach or is too expensive to be feasible: Sailing aids (example, lighthouses), SOS posts on highways, railway signalling, etc.

In solar streetlights, the battery, which charges during the day fed by a solar panel, powers the LED lamp at night. There are other urban installations that work with the same system: parking metres, traffic lights electric vehicle charging stations, bus stops, etc.

Solar panels are installed on caravans to provide independence and free electricity for people who live in them long-term. Likewise, they make life easier for sailors, because they are used as a source of energy on ships and boats, allowing them to spend more time at sea.

Thousands of miles from the nearest power socket on Earth, satellites and spaceships depend on solar energy. For example, this is how the International Space Station (ISS) works, where astronauts can live and conduct research thanks to its huge solar panels.