Cutting and pasting genes is the basis of CRISPR, the gene editing technique that, discovered five years ago, is already bearing its first fruits in the treatment and diagnosis of various diseases and ailments. We explain what this technology is and what it is used for. 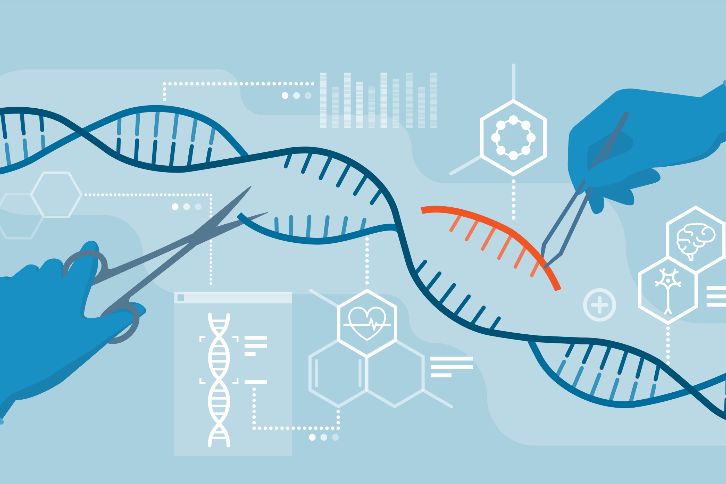 CRISPR is an acronym for Clustered Regularly Interspaced Short Palindromic Repeats. Simply put, they are families of DNA sequences found in certain bacteria. These sequences contain, in turn, DNA fragments from viruses that have previously infected those bacteria.

CRISPRs function as an immunological memory, as they store the molecular fingerprint of viruses in the DNA of bacteria. In this way, new infections can be detected and neutralised, resulting in immunisation of these cells.

How CRISPR works is simple to understand. An enzyme called Cas9 acts like "molecular scissors". It is used to cut and modify sections of DNA associated with a disease (or, in other words, a virus attack), or any kind of defect that needs to be repaired.

How does the enzyme find the exact place to cut and act? Another molecule, guide RNA, directs these "scissors" to the exact spot where the DNA change occurred. Once the cut is made, the necessary mechanisms are set in motion to repair the fragment.

CRISPRs have been known since the 1980s, although their exact function was only discovered in the last decade. In 2015, they were considered the biggest scientific breakthrough of the year as they made it possible to decipher these repetitive sequences present in the DNA of some bacteria. Thanks to them, enormous progress has been made in the field of gene editing, making processes cheaper and opening the door to a wide range of possibilities.

What is CRISPR and how does it work

SEE INFOGRAPHIC: What is CRISPR and how does it work [PDF]

WHAT IS GENE EDITING?

In nature, the growth of living organisms is controlled by the information present in their genes. Gene editing is a set of techniques used to alter the DNA of living organisms for a specific purpose. It should be noted that gene editing is not the same as genetic modification: in the first case, DNA from other species is not used, while in the second case, modification, it is.

Both gene editing and gene modification are part of biogenetics (commonly known as genetic engineering), which is the discipline that combines biology and genetics. Its direct applications are in the field of biotechnology.

Gene editing is the process by which the DNA fragment to be targeted is detected, removed and replaced with a new fragment. Alternatively, once the problematic fragment has been removed, cellular mechanisms are left to take over and repair the sequence themselves. Using these techniques, scientists can add, remove or change DNA as needed to meet the desired goal.

CRISPR is a revolutionary gene editing technique because it is based on the discovery that Cas proteins cut DNA provided they are given a suitable recognition RNA. As the RNA can be synthesised in the laboratory, the editing possibilities are virtually endless.

CRISPR techniques are used to introduce changes in the genome with enormous precision. The main applications include the following:

Medical applications, such as assays to eliminate HIV, or to treat diseases such as Duchenne muscular dystrophy, Huntington's, autism, progeria, cystic fibrosis, triple-negative cancer, or Angelman syndrome. Research is also trying to determine whether it could be used as a diagnostic test to detect the coronavirus, or as a therapy capable of destroying its genome.

Plant biotechnology. CRISPR techniques can be used to produce variants of plants that are better adapted to the environment, more resistant to drought or more resistant to insect pests. Organoleptic properties, including physicochemical properties, can be modified to make them more suitable for human consumption.

In animal technology, it can be used to introduce improvements in species to, for example, create herds resistant to typical diseases.

At the moment, there are no CRISPR techniques approved for the treatment of diseases caused by a single gene, which are the ones that could, in theory, be cured by gene editing. For this reason, medical applications are more theoretical than practical and are, for the time being, based on trials.

The CRISPR gene-editing technique raises a number of bioethical challenges. Although the main applications are positive, by making such a cost-effective technology available to everyone, certain barriers may be crossed.

In the case of uses of gene editing in primary industry, agriculture and animal husbandry, as long as they are of benefit to mankind, they are positive. However, each case needs to be analysed on its own merits. For example, the manipulation of plant species to make them resistant to pests is of great benefit to humanity.

On the other hand, when it comes to intervention on ecosystems, more caution must be exercised, as any unexpected alteration can lead to serious or uncontrollable problems.

In terms of medical applications, the use of gene-editing techniques on human beings requires very high safety guarantees and should only be used for pathologies where there are currently no effective treatments, or in pathologies where current treatments involve significant side effects.

Gene editing in embryos, finally, is neither scientifically nor ethically justified.