Iberdrola, through Avangrid Renewables, is taking part in the development of a large-scale offshore wind farm off the coast of the state of Massachusetts, United States. Vineyard Wind 1 will have a capacity of 800 MW, which will be able to meet the energy needs of over 400,000 homes.

External link, opens in new window., a company in which Iberdrola has a 50 % stake — through Avangrid Renewables

External link, opens in new window., an AVANGRID* subsidiary — and by Copenhagen Infrastructure Partners (CIP), is developing Vineyard Wind 1 offshore wind farm opposite the coast of Massachusetts. With 800 MW of installed capacity and an investment of 2.5 billion euros, it is the largest wind farm currently being developed in the United States, and one of the largest of Iberdrola group in the world.

The complex, which is expected to go into service in 2023 and that construction began in November 2021, will generate wind power sufficient to meet demand from over 400,000 homes and businesses across the Commonwealth of Massachusetts. It will also prevent the emission of more than 1.6 million tons of carbon dioxide every year, the equivalent to withdrawing 325,000 vehicles from the roads. In addition, during the life of the project, a total of 3,700 million dollars will be saved in energy costs in the region of New England.

The project will create 3,600 full-time equivalent jobs and, under the Project Labour Agreement (PLA), at least 500 of the jobs created during the construction phase of the project are guaranteed to be filled by local staff and includes high hiring targets for women and various groups facing racial discrimination in the US.

This new development, slated to be the first commercial scale offshore windfarm in the United States, will be Iberdrola's group's first offshore wind energy project in the country, ratifying its position as a global leader in this area. 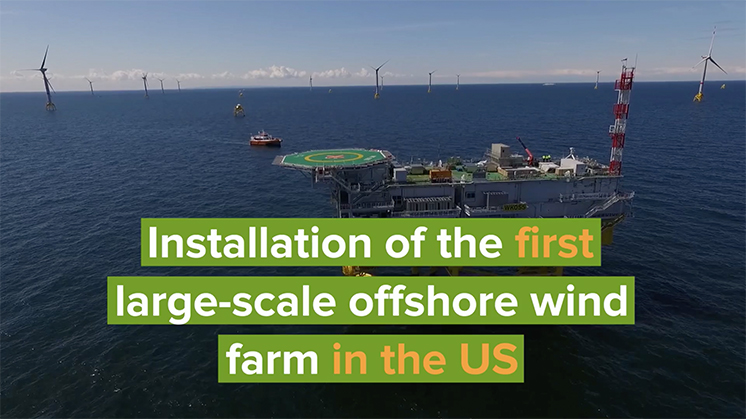 EVOLUTION OF THE PROJECT

On 18 November 2021, construction began on Vineyard Wind 1, the first large offshore wind farm in the United States, which will be 25 times the size of the only existing facility of its kind in the country, located in Rhode Island.

The project had reached a $2.3 billion financing agreement

External link, opens in new window. with nine global lending banks, the first financial close for a commercial scale offshore wind project in the US. The financing included a long-term power purchase agreement (PPA) and an electricity interconnection programme, and allowed construction to begin, with the aim of starting to supply clean electricity to Massachusetts in 2023.

Vineyard Wind has therefore been securing all necessary permits, among them the federal approval from the US Bureau of Ocean Energy Management (BOEM), to commission Vineyard Wind 1.

BOEM had already issued the Final Environmental Impact Statement (FEIS) for the park, a comprehensive study to evaluate the potential environmental impacts of the proposed project and informs BOEM's Record of Decision.

After receiving final authorization from the Federal Energy Regulatory Commission (FERC), the company has now executed an agreement with ISO New England to connect its generation into the New England electric power grid at the NSTAR 115kV switch station in Barnstable, Massachussets.

Once the start of the federal environmental study has been approved, the company has signed long-term energy sale agreements, which are known as Power Purchase Agreements (PPAs) with Massachusetts electricity retailers. Currently, 70 % of these PPAs are assured.

Vineyard Wind 1 will be utilizing GE Renewable Energy's industry leading Haliade-X wind turbine generators, the most powerful in operation to date, with up to 13 megawatts of power and a height of 248 metres. Each of these turbines can save 52,000 tonnes of CO2 per year and in a single rotation — of 38,000 m2 — they can generate the energy needed for a home for more than two days.

Meanwhile, Windar Renovables will be responsible for manufacturing the wind turbine foundations. The contract is worth around 100 million euros and will create approximately 400 jobs (500 at peak times) at the plant in Asturias (Spain).

Vineyard Wind has entered into an agreement with Italian company Prysmian Group worth 200 million euros to design, manufacture, install and commission the submarine cabling system that will connect the offshore wind farm with the Continental US power transmission grid. The project will require a total of 134 kilometres of high voltage alternating current electric cable.

Lastly, US company Southwire has been selected as the main supplier to design, manufacture and install the terrestrial cables. It will install more than 51 kilometres of high voltage cable during the first quarter of 2023. The cable will be manufactured at the Southwire plant in Huntersville (North Carolina), which will use avant-garde technology to produce high and extra-high-voltage cables ranging from 69 kV to 500 kV.

OTHER PROJECTS IN THE UNITED STATES

The United States has become the spearhead of Iberdrola's offshore wind business. In fact, it is its main investment destination in the coming years, with more than 35 billion dollars planned for the 2020-2025 period.

The company currently has three of the country's most important energy initiatives underway, which will require $11 billion in investment in the field of renewables and grids: the construction of the Vineyard Wind 1 offshore wind farm — of which it may take control during its operational phase

External link, opens in new window. —, the acquisition of PNM Resources in New Mexico and Texas, and the development of the New England Clean Energy Transmission Line (NECEC).

Vineyard Wind has presented Massachusetts electricity retail companies with a set of proposals to develop a second offshore wind farm, Vineyard Wind 2, which will be installed to the south of the former. The proposals include a 400 MW project and options to develop a further 800 MW.

Besides, another project — this in the state of Connecticut — was chosen to advance to contract negotiations by the Connecticut Department of Energy and Environmental Protection (DEEP). With its 804 MW, the offshore wind development of Park City Wind will power approximately 14 percent of Connecticut's electricity supply and avoid emitting more than 25 million tons of carbon emissions in the state. Its silhouette will not be visible from any point on the coast of Connecticut.

In this same state, the company intends to partner with two local companies, McAllister Towing and Bridgeport Boatworks, to develop an offshore wind farm in Bridgeport. If approved, this initiative will create over 500 jobs in Connecticut during the construction phase and 1,900 during the entire project. It will also bring in over 4 billion dollars in revenue to the state, improve the reliability of the electricity supply and stabilise prices.