Ranking of the 10 Most Innovative Countries in the World

Which are the world's most innovative countries?

What makes a country a benchmark for innovation (R&D)? Bloomberg created its Innovation Index in order to establish a ranking of the world's most innovative countries. The index takes account of such indicators as patent registration, investment in education and productivity. Find out which ten countries head up this ranking. 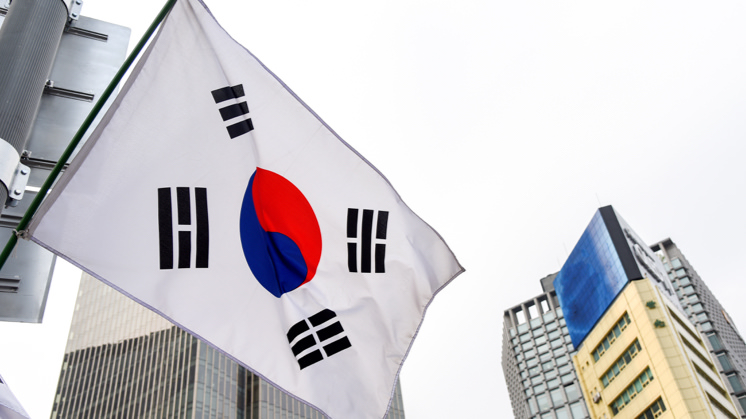 South Korea is the world's leading manufacturer of smartphones and televisions. 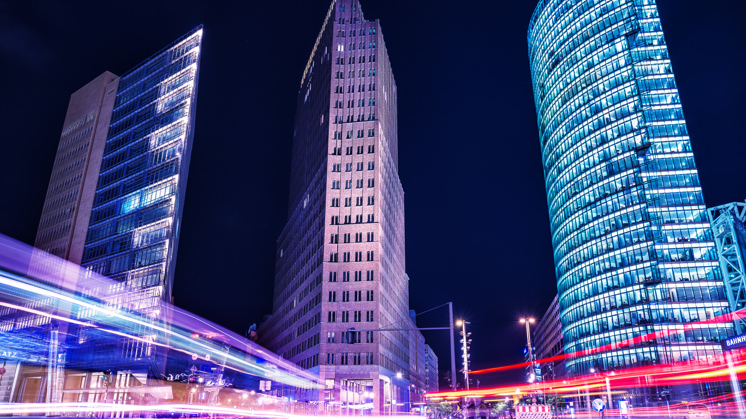 Germany has the highest concentration of high-tech companies in sectors such as the automotive industry and electronics. 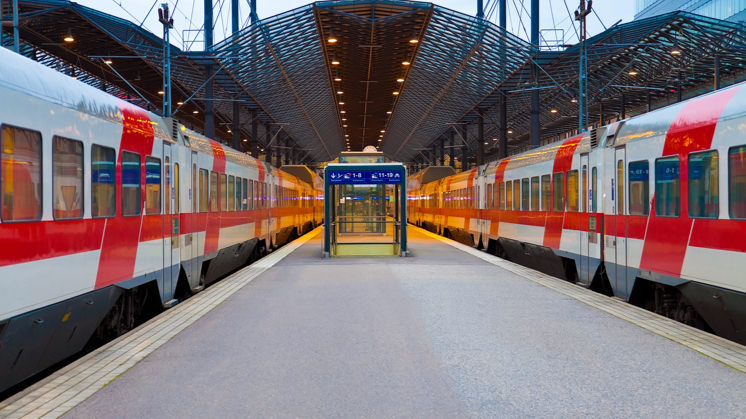 Finland stands out due to its high patent activity, its productivity and its investment in higher education. 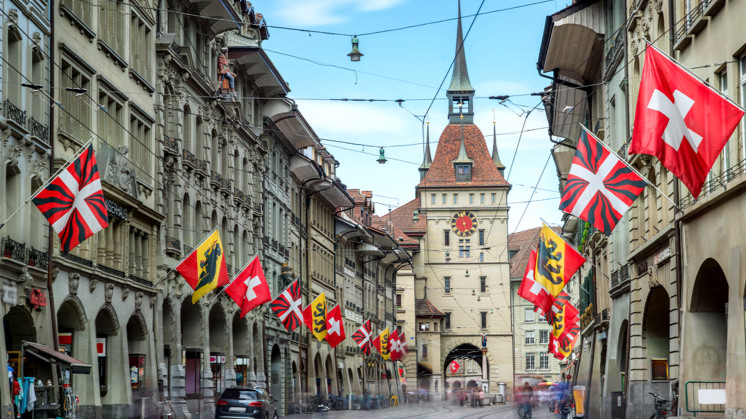 Switzerland has a high concentration of scientific researchers in places such as CERN. 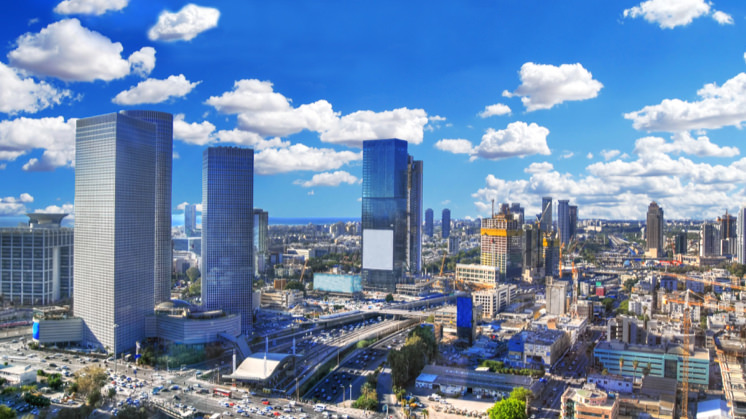 Israel is the country with the second largest number of startups in the world, surpassed only by the United States.

South Korea is the most innovative country on the planet. So says the 2019 Innovation Index produced by Bloomberg, which specialises in economic and financial software, data and media. To reach this conclusion, Bloomberg looked at the economies of 200 countries, analysing various criteria with data provided by bodies such as the World Bank, the Organization for Economic Cooperation and Development (OECD), the International Monetary Fund (IMF), the International Labor Organization (ILO), the World Intellectual Property Organization (WIPO) and the United Nations Educational, Scientific and Cultural Organization (UNESCO).

WHAT IS THE GLOBAL INNOVATION INDEX

The final list contains the 60 most innovative countries (scored out of 100) of the 95 countries that met the requirements, after eliminating those that did not provide data for at least six of the seven main categories on which the ranking is based:

Investment in R&D
Percentage of a country's Gross Domestic Product (GDP) dedicated to Research and Development (R&D). South Korea comes top in this category, with 4.3% of its GDP, nearly US$70 billion, going to R&D.

Patent activity
Number of patents registered internationally. The United States remains in the lead due to its mighty technological industry, with registration of patents relating to Artificial Intelligence (AI) showing particularly strong growth.

Investment in higher education
This refers to the educational level of workers, specifically those with bachelor's or postgraduate degrees and doctorates. Singapore is in the lead, investing 20% of its annual budget. In contrast the United States invests barely 2%.

Added value in industry
The U.S. Bureau of Economic Analysis defines added value as "the contribution of a private industry or government sector to overall GDP". According to Bloomberg, the leader in this measure is Ireland.

Productivity
Ireland leads this category too, thanks to what Nobel Prize winning Economist Paul Krugman once defined as leprechaun economics following the country's strong increase in GDP as a result of the massive influx of multinationals.

Density of high-tech companies
This encompasses companies dedicated to information technology, biotechnology, electronics, etc. By this measure the United States is the undisputed leader, as it is the home of the world's biggest technology companies.

Researcher concentration
Number of science and engineering professionals (including doctorate students) per head of total population. The leading country is Denmark, nearly a fifth of whose research output is cited in 10% of the most important publications in the OECD countries.

THE WORLD'S MOST INNOVATIVE COUNTRIES

Based on the seven factors referred to, Bloomberg's 2019 Innovation Index concludes that these are the world's ten most innovative countries:

South Korea
Has some of the world's largest technology companies thanks to private sector incentives. It is also the leading manufacturer of smartphones and televisions. Its commitment to higher education is reflected in the large number of researchers.

Germany
Takes second place, thanks to the added value of its manufacturing industry and the concentration of high-tech companies that promote research in sectors such as the automotive industry and electronics. It is also one of the top five countries in terms of the number of 'unicorns' (startups valued at over $1 billion).

Finland
Is one of the countries that invest most in R&D (3.2% of its GDP) and it also stands out due to its high level of patent activity, its productivity and strong investment in tertiary education. Its economy is mainly based on metal products, engineering and electronics.

Switzerland
Is home to some of the world's biggest multinationals and prestigious international bodies. Its position in the ranking is due to its powerful industry, its strength in R&D and the high concentration of scientific researchers in centres such as CERN.

Israel
The country with the second largest number of startups in the world, surpassed only by the United States. It has a first-class technology industry which promotes entrepreneurship and is among the leaders in terms of the concentration of scientific researchers and patent registration. 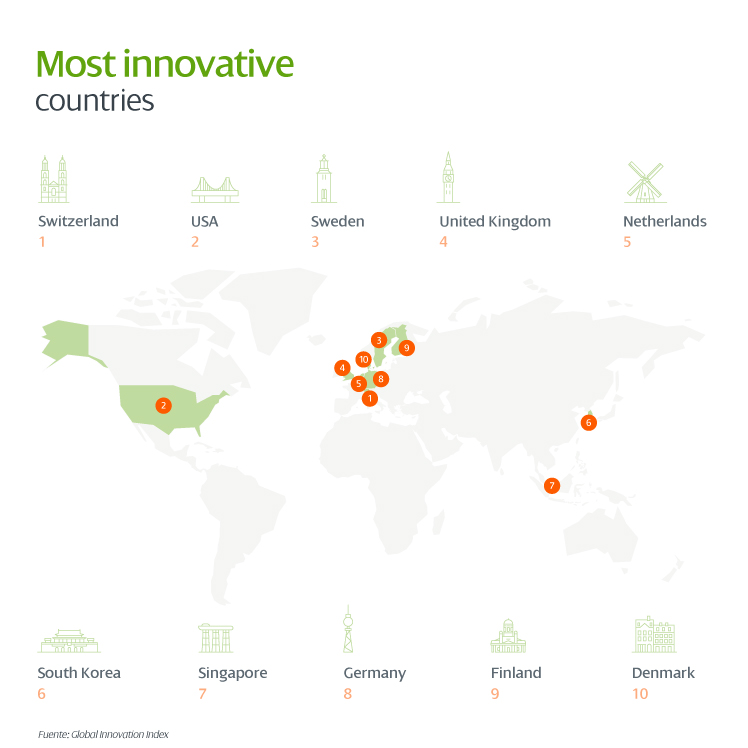 The world's most innovative countries.

Singapore
has one of the world's strongest economies and is the second easiest country in which to do business, according to the World Bank. It also stands out for its level of education and is a benchmark in energy efficiency.

Sweden
Has one of the world's most innovative economies thanks to its high level of productivity and commitment to investment in technology, with telecommunications and computer equipment as two of the major drivers of GDP growth.

United states
Is the world's biggest economy and is in the top ten of this index thanks to a technological sector that leads the world in the number of startups and in the concentration of high-tech firms, most of them based in the San Francisco Bay area. World leader in patent activity.

Japan
Heads the list in areas such as robotics, biotechnology, nanotechnology and renewable energy. It is also the world's third biggest automotive manufacturer and one of the largest producers of consumer electronics.

France
Stands out due to the high density of high-tech companies, which is not surprising considering that the country's main economic sectors include telecommunications, electronics and the aerospace and automotive industries.