What is the Future Economy, are we ready?

THE ECONOMY OF THE FUTURE

Which sectors will lead the economy with digitalisation and sustainability?

The global lockdown due to COVID-19 has had a seismic effect on the economy. Some sectors have been particularly vulnerable, while others, such as streaming platforms and e-commerce which are linked to digitalisation have had a boost. The pandemic has also highlighted the need to maintain a healthy relationship with the environment. This scenario gives a glimpse of which sectors will dominate the economy of the future. 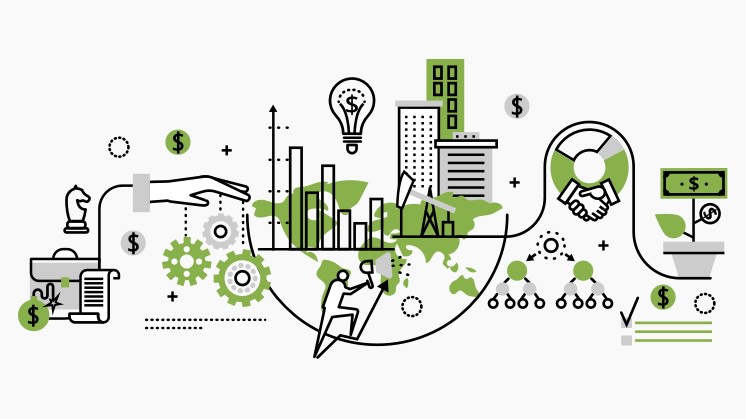 Digitalisation and the fight against climate change will be the driving forces of the economy in the coming years.

The arrival of the internet in the 1990s brought with it a more disruptive meaning to the change of millennium. It was no longer a simple numerical variation, but the birth of a new paradigm characterised by the supremacy of the digital over the material. In 2006, only 15 years ago, the three largest companies in the world by market capitalisation were: ExxonMobil (oil), General Electric andGazprom (energy). By the end of this decade, the ranking is already led by companies with a high digital component such as Apple, Microsoft and Amazon. The fight against climate change must now be added to the digital variable.

THE ECONOMY OF THE FUTURE

The world is evolving rapidly and the economy is evolving at an equivalent pace. In addition, it is not spared from the effects of shocks such as that caused by the COVID-19 pandemic which has shaken many sectors. The current crisis has already outlined a future in which the sectors that traditionally boosted GDP the most are going to be overtaken in the medium term by new, growing sectors. New technologies and services for people, with special attention to the elderly, will be engines of growth.

Digitalisation, in line with scrupulous respect for the environment, will mark the economy of the future. A good example of this synergy is smart farming, which allows farmers to maximise their resources and to irrigate, fertilise and spray each piece of land with surgical precision according to its characteristics and weather forecasts. So, this revitalisation, which is already a reality in the cities (smart cities), will make the leap to villages (smart villages).

THE FOURTH INDUSTRIAL REVOLUTION AND THE DIGITAL ECONOMY

Tools such as big data and its capacity to squeeze the juice out of massive amounts of information, the Internet of Things (IoT), artificial intelligence and machine learning have revolutionised the business and industrial world, favouring both efficiency and quality of production processes and the optimisation of decision-making. The Fourth Industrial Revolution is marked by these new technologies and has forced companies to adapt to them (digital darwinism) in order not to succumb.

Industry 4.0 also poses a challenge for developing countries. Currently, around 3.6 billion people in the world do not have access to the internet, depriving them of the essential resources to develop and generate wealth in the 21st century. This inequality in access to the internet is known as the digital divide and its reduction, which is key for everyone to progress at the same pace, is covered by the United Nations' Sustainable Development Goals (SDG 9).

THE COVID-19 CRISIS AND THE GREEN ECONOMY (GREEN RECOVERY)

COVID-19 has hit the world economy hard. Faced with this crisis, multilateral bodies, governments and leading members of the business and financial sector have insisted on the need to undertake agreen recovery such as that proposed in the European Green Deal, citing reasons that can be grouped into two categories:

BUSINESS SECTORS OF THE FUTURE

During lock down, some sectors have experienced significant growth, streaming platforms in entertainment and online sales in retail, among others. Their strength, closely linked to digitalisation, gives an idea of which sectors, together with those geared towards sustainability, are in a position to lead economic growth in the future. Let's take a look at some of them: 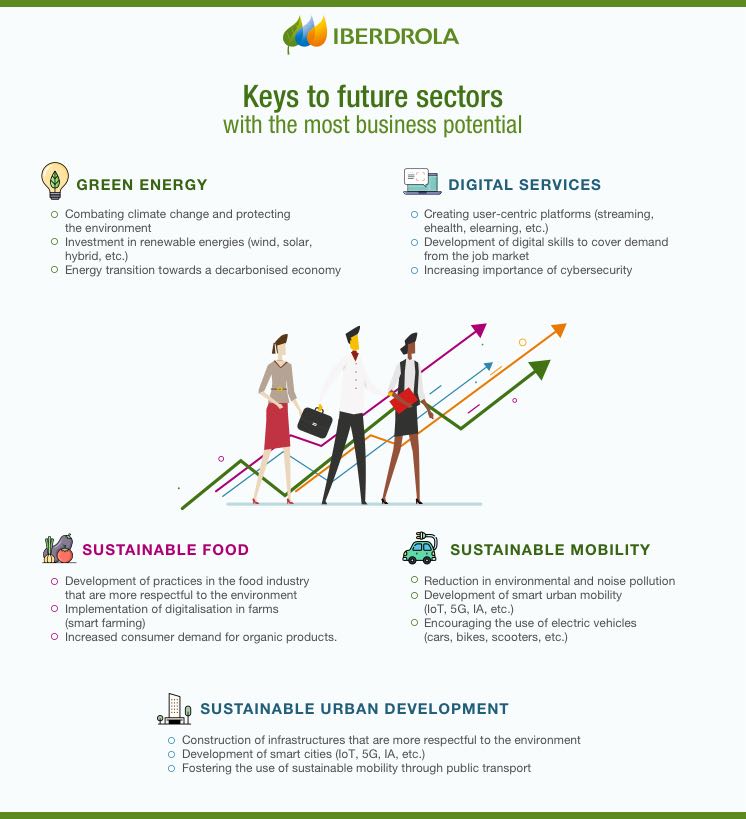 Keys to future sectors with the most business potential.

SEE INFOGRAPHIC: Keys to future sectors with the most business potential [PDF]

Fighting against climate change and safeguarding the environment is good for the planet and for the economy. A commitment to renewable energies and to the energy transition towards a decarbonised economy is vital in order to go in that direction, and investors, aware of this, are leaning more and more towards those companies that bet on green energy.

Reducing pollution is essential in order to minimise the impacts of climate change and to do so it is vital to commit to sustainable mobility. According to BloombergNEF, this sector is expected to reach a 58% market share by 2040 with annual sales of 54 million electric cars. Technologies such as the IoT, 5G or artificial intelligence, among others, will help.

The rise of remote working and video calls, online training and applications for practising sports, among others, as well as the growing importance of cyber security are some of the trends behind the boost to this sector. In this context digital skills are becoming increasingly important for companies, increasing the demand for digital profiles.

The market for food from organic farming has quadrupled in the 21st century and more and more countries are including food sustainability in their policies and consumer education guides because of its ability to act against climate change, protect forests, improve health and preserve water resources, among other benefits.

Despite the revitalisation of rural areas, the majority of the population will be concentrated in urban areas and this is where sustainable urban development comes in. The aim is to create more sustainable, inclusive and liveable cities and for that purpose the creation of sustainable infrastructures will be key. In addition to the green transformation, the digital transformation will also be important (smart cities).